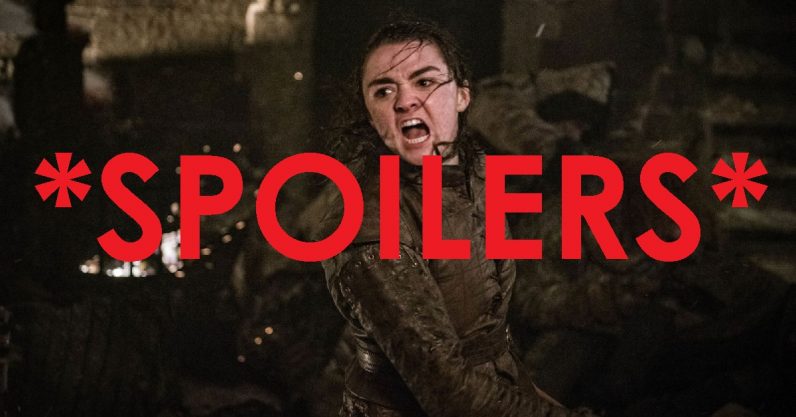 Okay, before we get started, I’m going to warn you that there are *SPOILERS* in this post for episode 3 of season 8 of Game of Thrones.

For those of you still here, I assume you’ve watched last Sunday’s episode, “The Long Night.” Or you know, attempted to… it was pretty dimly lit. Raise your hand if you spotted the video game level in Winterfell? Well, it wasn’t exactly that, but it looked a lot like one.

After the zombies have swarmed Winterfell, Arya Stark finds herself creeping through the halls of her childhood home, trying to avoid drawing the horde’s attention. She creeps into the library, only to find several zombies wandering around. Drawing on her Faceless Man training, Arya sneaks around them, hiding in the shadows of the bookshelves as they patrol the room.

Tonally, this moment gave viewers a much-needed respite from the utter chaos happening outside. But functionally, it turned Arya Stark into “Basically the Hero of Any Stealth Game.”

Arya has to use her knowledge of the surroundings to her advantage, moving from safe point to safe point, even backtracking when the situation gets dicey. She uses hiding spots, moving in short bursts when she sees an opening, staying out of her enemies’ line of sight. At one point she even throws a book to draw the zombies to a spot away from her.

Anyone who’s played Thief: The Dark Project, Splinter Cell, Metal Gear Solid, Deus Ex, Alien Isolation, The Last of Us, or even the Batman: Arkham games will recognize these stealth game hallmarks. At one point, Arya has to kill a zombie quietly when she runs into it so it doesn’t raise all the alarms in the castle, quietly lowering the body to the floor. I’ve pulled that maneuver in more games than I can count, most recently in one of the Assassin’s Creed games.

Hell, the zombies even appear to follow recognizable movement paths. Notice how none of them venture to the ends of the bookshelves where Arya’s hiding? There’s always a zone like that in every stealth section. Arya’s also able to follow their patterns and slip by them. One of the zombies even does the Outlast move where it looks in her former hiding spot for her, despite the fact they haven’t seemed intelligent enough to do that up to this point.

It doesn’t do her any good in the end — the zombies are still swarming the castle, so once she leaves the room, she has to have her bacon saved by Beric Dondarrion, but for about five minutes, Arya was totally playing a level from a video game. If we were ever get a Game of Thrones game that’s not an MMO or a talky Telltale tangle, I want to see this scene recreated.

Read next: Why Switzerland is a perfect launchpad for Europe’s first large-scale 5G mobile network