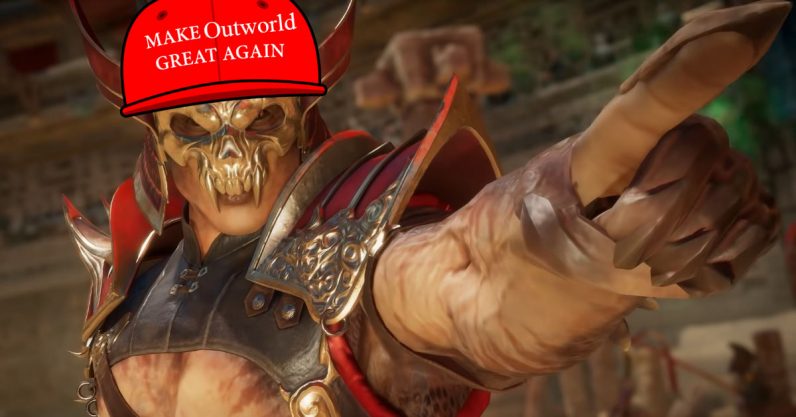 Of all the things I expected to see and hear when playing the newest entry in the Mortal Kombat series — and, given this series’ reputation, I was expecting the most — sly digs at American president #45 were pretty low on the list. But developer Netherrealm Studios delivered, and they didn’t do it subtly.

I got an early promo code for Mortal Kombat 11 and have been playing it over the weekend, enjoying the new characters and the old favorites. To set the scene, the combatants (oh, sorry, “Kombatants”) in the match where this happened are Jackson “Jax” Briggs, an American Special Forces soldier, and Erron Black, an Outworld assassin with a ten-gallon hat and six shooters — and actor Troy Baker really leans into his Texas accent when voicing the latter. Now, when two opponents are about to face off in MK, they share some banter, which usually (but not always) sets up why the two are fighting.

Imagine my surprised chuckle when Erron said to Jax, “I’m not such a bad hombre.” Jax responds: “Just stay on your side of the border.”

In case you missed the quote, which went memetic during the 2016 American presidential election, here’s what that banter’s referring to:

I’m not sure if any political commentary was intended with that line. Sure, it kinda sounds like they’re making fun of Trump with that quote, but Erron Black’s both an assassin in the pocket of a foreign government and a former member of a weapons trafficking gang, so Jax has good reason for not wanting him in our realm.

Another line is decidedly less ambiguous: I found out from Twitter that, if you match up Shao Kahn with the Kollector, the former praises the latter for his decades of loyal service and tells him they will “Make Outworld Great Again.”

For the uninitiated, Shao Kahn is the former Emperor of Outworld, brought back from death by the time travel shenanigans in this game. He’s a brutal tyrant whom nobody missed. (*Spoilers*) At one point in the story, he tells his adoptive daughter Kitana the only reason she’s alive is because he wanted to appease her mother, the wife of a king Shao Kahn murdered and who was subsequently forced into marrying him. So yeah, he’s not a nice man, and the comparison is presumably not meant to be flattering.

To be clear, MK‘s characters ham it up in these opening lines — most of them are meant to be funny, rather than meaningful, so I doubt it’s intended to be taken too seriously.

That said, it’s not the only element of the game that’s political in nature. For example, some users are upset about Jax’s Arcade Ladder ending, which you get if you beat a series of opponents as that character (*SPOILERS*): Jax uses his newfound time control powers to erase several of the injustices of history, including slavery, saying he’s not waiting for humanity to “get woke” on its own. It didn’t exactly strike the right note with a lot of people.

NetherRealm. What the hell did you do with Jax's ending?

This is one of the most embarrassing things I've ever seen. You spent all that time in the 90's learning to NOT bow down to moral panic… just to end up bowing to it in the cringiest move I've seen this year.

I haven’t heard all dialogues or seen all the endings in the game, so it’s possible there’s more in there I’m missing. I thought the references were funny, but there are other users who might not enjoy them as much.

Read next: [Best of 2019] Why 'Magic: The Gathering' is AI's toughest challenge