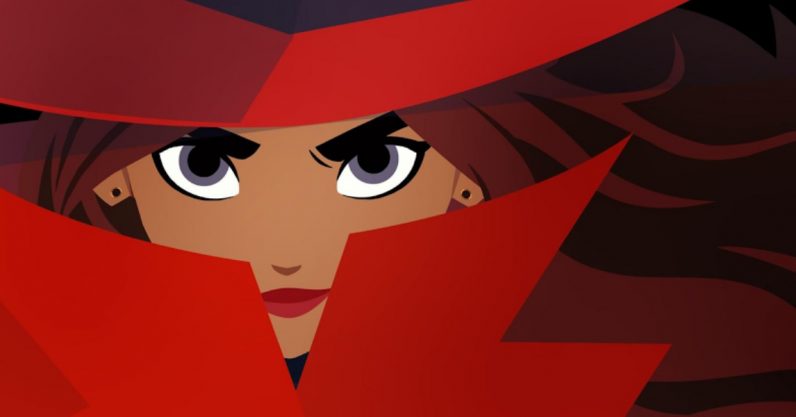 Carmen Sandiego, renowned lady thief and the original superstar of edutainment, has finally made her way into a new video game — only this time, the actual world is her canvas in Google Earth. I don’t know who came up with this idea, but I’m so glad they had that brainwave, because this combination of Carmen and Google Earth is so inspired that I don’t know how it’s taken this long for someone to come up with it.

Thanks, no doubt, to her recent Netflix revival, Google is collabing with Carmen’s publishers, Houghton Mifflin Harcourt on an in-Earth game called The Crown Jewel Caper. You can access it from either the site or the mobile app.

You play an ACME agent tasked with tracking down the infamous Lady in Red, who’s apparently made off with the Crown Jewels. To do so, you must question eyewitnesses, who’ll give you hints as to where Carmen went next in her journey. The clues range from the colors of the next country’s flag to famous landmarks. Once you think you’ve figured out where to go next, you select the destination from a list of cities, and so on and so forth.

This brings back some amazing memories. I grew up in the nineties, and was at precisely the correct age to consume both the TV shows and the late-nineties wave of Carmen Sandiego video games. Encouraged in my zeal by parents eager to foster my love of educational material, I devoured any game that had that signature red trench and fedora on the cover. Where in the World, Where in the USA, Where in Time (that had the best theme song, fight me), Word Detective, ThinkQuick Challenge, Treasures of Knowledge — I played them all and remember them with the fondness I otherwise reserve for my childhood pets and Spyro.

Sadly, if Carmen’s jaunt in Google Earth has one downside, it’s that it was over too quickly. Maybe I retained too much of the knowledge from the original games, but the first time I played, I solved the mystery inside of half an hour. Even when I tried to take the “wrong” path to see where it would lead, it was a diversion of no more than a few minutes.

Regardless, now that Carmen has made her way onto Google Earth, I don’t see how we can return to a world where she’s not there.

Carmen’s a bit of a slippery character, so we understand if you can’t find her. But you can easily find TNW 2019, with all its amazing speakers and activities, by clicking here. We hope to see you there!