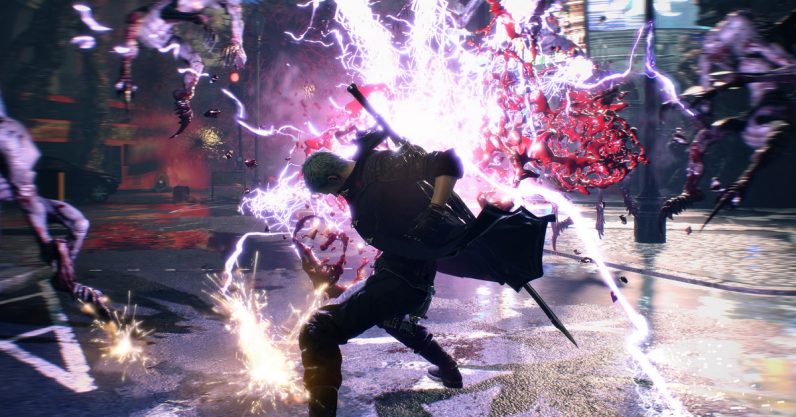 Devil May Cry V, the long-awaited return of the legendary action game series, oozes seriously sexy style and brings some fun action game chops. It’s got some rough spots, but even at its worst, DMC V gives you more flash and fun than any other game so far this year.

In this latest adventure, series protagonist Dante and his protege Nero are locked in combat with the Demon King Urizen, whose devilish tree, the Qliphoth, has burst from the underworld and destroyed a city. They’re joined by newcomer V, a mysterious young man with demon-controlling tattoos. Together, the three demon hunters must cut, slash, and shoot their way through thousands of demons to settle their score with Urizen.

Before I tell you whether DMC V is worth your red orbs or not, I just gotta say it is such a goddamned pleasure to play if you’re a fan of the classic series. I try my hardest to be a fairly objective reviewer, but I’d be remiss if I didn’t tell y’all that I wriggled with delight when I heard actor Reuben Langdon’s voice come from Dante‘s mouth.

Cyberpunk looks cool, and all, but I want my fucking Devil May Cry and I want it fucking YESTERDAY. #E32018 #XboxE3

There was a period of time when we all thought the series as we knew it was kaput, particularly after the… um, divisive reboot by Ninja Theory. For those of you who weren’t there for it, classic Dante was shafted by the new developers for not being “cool” enough, to be replaced with a club-hopping try-hard with black hair. Gamers protested unwelcome design and gameplay changes, the developers pushed back, and it was a very ugly scene all around.

My favorite relic of the era is this article from VG247, in which the writer claims the only issue fans have with the rebooted Dante is his hair color and tells the collective fanbase to “get over it” and “grow the fuck up.” For my part, the sticking point wasn’t the hair, but the execrable personality change. Say what you will about the original Dante, but I’ll take his cocksure goofiness over the swearing, misanthropic shitstain who replaced him in the reboot — and apparently I’m not the only one, as that game’s sales were middling at best worldwide.

The gameplay is neatly divided between Nero, Dante, and V. Each has a play-style that’s satisfying and distinct in its own way. Dante can switch between various fighting stances and weapons on the fly, capitalizing on his experience and armory. The fragile V has to keep his distance and commands demon familiars to do the fighting for him. Nero, meanwhile, lacks their inherent strength and versatility, but can equip various Devil Breakers (mechanical arms) with different gameplay effects.

V is the character most obviously made for newcomers, as his movement and style are much slower and deliberate. I consistently pulled S ranks in his levels. Dante doesn’t show up until several chapters in, so gaining access to his myriad weapons feels like opening a toy box. And Nero’s Devil Breakers offer a pleasing variety of attacks and special moves — my favorite being when he turns one into a rocket and surfs it right into his enemy’s stupid face.

It sounds complicated, but Capcom has done a good job of keeping the basics consistent across all three styles. Each character uses the same commands for long range, short range, and special attacks, meaning muscle memory won’t impede you. You can play the game as a simple hacky-slashy-button-mashy if you’re feeling boring, but there’s a whole second layer of strategy involving taunts, counters, and special attacks you can use if you want to get better scores on the higher difficulties.

And speaking of difficulty… it’s Devil May Cry. It’s going to hurt you, and you’re going to love it. While the missions themselves are relatively straightforward, they’re supplemented by several “secret missions” where you can take on greater challenges for in-game rewards. You definitely won’t be bored.

Now, I’ve been waiting a long time for this game, and I wish I could tell you there’s absolutely nothing wrong with it. Sadly, there are a couple of places it doesn’t quite live up to its potential.

For example, the game’s starting environment – the ruined Red Grave City – is by far its most interesting. Nero and V have to traverse a variety of locations within it, including a sewer, a swank hotel, and a crumbling church. But when the boys enter the Qliphoth, that variety goes out the window, along with the game’s grungy, Gothic-urban appeal. All the locations within the Qliphoth, save one or two boss fight arenas, feel and look the same. It’s one long hallway with the same chitinous texture all over the walls.

Gameplay also has its rough patches. The boys can lock onto enemies, no problem, but they won’t do the same to the treasure nodes, which give you red orbs and healing green orbs when you hit them. So you’ll have these absurd scenarios where your witty, capable demon hunter will be standing feet away from a treasure node, firing his gun resolutely at the wall to its immediate right. Also, if you want to reach all the areas with hidden collectibles, you’ll have to do some platform jumping — which is so frustratingly difficult at times that I just gave up.

Remember what we used to say?

If Devil May Cry exceeds in one thing, it’s couching its dark, demonic stories in a bubbly, carefree humor. No matter what the villains say or do to Dante, he shakes it off like a bug bite and returns with a sarcastic rejoinder. While this game retains that spirit, it also aims for a story with some emotional depth.

It reminds me of Bayonetta 2: it still has the same over-the-top protagonist (or protagonists, in this case) and Gothic design, only now with more familial melodrama and marginally fewer hammy scenes. It’s a game made by, and for, older gamers. I’m okay with that, but if you go into it expecting anything like this Shakespeare-on-acid cutscene from Devil May Cry IV, you may be slightly disappointed.

Still, the protagonists don’t disappoint. They’re sexy, silly, and way too much fun to be around. Even if Nero does brood a bit more than is necessary, and the revelation of V’s identity is telegraphed just a bit too obviously, they and Dante have that trademark cheeky energy that makes this series such a joy to play.

I have only one big complaint about the story: with so much attention paid to the boys of DMC, the badass girls get pushed to the side. Dante’s demon-hunting partners, Lady and Trish, are given almost nothing to do, and while gunsmith Nico has great personality and character, she often functions as nothing more than a mobile upgrade station. For several missions, her part is played by a literal statue, if that tells you anything.

And I’m not normally the type to complain on principle purely because the women don’t get screentime — hell, Nero’s girlfriend (and glorified window dressing) Kyrie appears even less in this game than she did the last one, and I’m cool with that. But Trish and Lady have been part of the story far longer than Nero. So it’s baffling to see them sit out the vast majority of this adventure. Not to mention both are subjected to a rather humiliating in-game event and a pair of tawdry cutscenes that made me uncomfortable and really brought down the light, funny atmosphere. I won’t spoil the exact details — but I think you’ll know it when you see it.

But all my complaints don’t really take away from my enjoyment of the game. It’s just too good to have Dante and Nero back again after all these years. I was practically crying with delight by the time the credits rolled, and I suspect I won’t be the only one. This game’s energy and sex appeal make every other game I’ve played this year look half-asleep by comparison.

Read next: Enter to win an iPhone XS Max & AirPods in this free giveaway