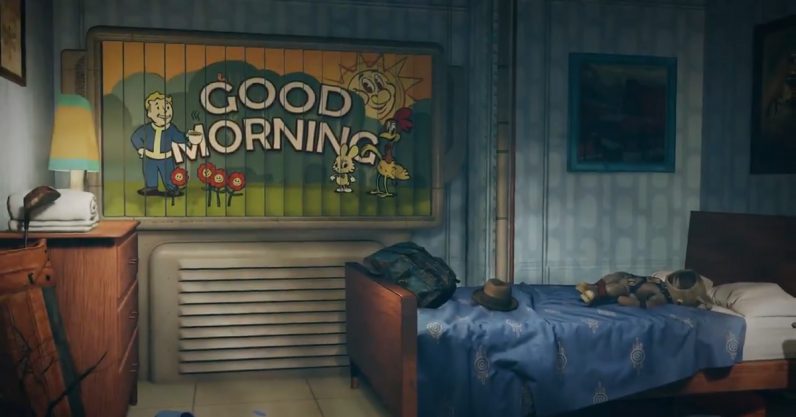 After a teasing Twitch stream which lasted almost an entire day, Bethesda finally revealed the trailer for its latest game: Fallout 76. The trailer itself didn’t reveal much beyond the fact the game concerns Vault 76 and the soundtrack might evolve past “Butcher Pete” and “Civilization” finally (though I’m not sure John Denver is where I’d have taken it, but whatever).

"When the fighting has stopped, and the fallout has settled…"

With no official word to dispute them, rumors are already circulating about what kind of game Fallout 76 is going to be. The prevailing theory at the moment is it’s going to be an online survival game, in the vein of Rust or DayZ.

The rumor springs from multiple apparent sources. Kotaku cites anonymous insiders. A Reddit user called SoMeh, who accurately predicted the title of Fallout 76, also predicted it would be built around the base-building mechanic from Fallout 4. Other leaks from 4chan insist the game will be a Rust clone.

Now, I don’t necessarily set much stock by these rumors. I can’t vouch for their reliability, and I’d advise anyone to take them with a massive grain of salt.

But let’s assume for a moment that they’re true.

The Fallout universe seems to have been steadily heading in this direction with Fallout 4 and the mobile game Fallout Shelter. Both games sowed the seeds of an idea for a survival sim set in the universe.

Fallout 4 also introduced the concept of base-building, a in-depth mechanic that nevertheless felt cribbed from about sixty different Skyrim mods. It’d be a decent start from which to craft a survival game — and one with decidedly more interesting background than those in other games in the genre.

If the game does go in that direction, it’ll also have a solid lore basis from which to start. For starters (and, again, assuming the rumors are true), the game will be set less than thirty years after the bombs drop, as opposed to centuries later. When the protagonists of previous games emerged from their vaults, they were greeted by a threadbare, but nevertheless surviving human society. Could the inhabitants of Vault 76 be the progenitors of this civilization?

Also, the inhabitants of Vault 76 were in a control group, meaning they don’t have the requisite insanity brought on by Vault-Tec’s experiments in the other vaults. They’d be an ideal group to try rebuilding what’s left of society, albeit having to hack it out of the still-fresh wounds of nuclear war.

The Fallout universe is a rich one, ready to be explored. No matter what game comes out, I’d be interested to see where Bethesda takes the series as a whole. And if it is a survival game, I think the story of this series provides a more interesting backdrop than many other examples of the genre could claim.

Read next: A yoga guru is taking on WhatsApp in India with a rival messaging service (Update: not anymore)