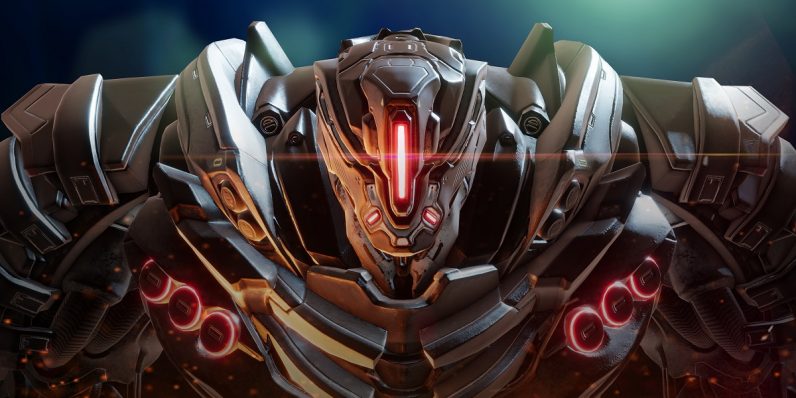 Available on HTC Vive or Oculus Rift, Archangel puts players inside of a giant mech – a human-piloted robot – and tasks them with defending the world from hordes of evil bad guys. It’s a bit more complex than that, and the story is one of the things about the game that really shines, but the gist is: you shoot a bunch of stuff.

In its current iteration, Archangel is an on-rails shooter. Which is fine, some of my favorite games include rail shooters like House of the Dead and Time Crisis. But, having a leash on in virtual reality is always a bit of a bummer.

The Hellfire update, still in beta, lets your mech off the chain. And at the risk of sounding redundant, the update itself is also off the chain.

I checked it out, bearing in mind that this is an early-access update that’s still in beta, and I was blown away. The Hellfire update brings frenetic multiplayer action in the form of two on two deathmatch combat. Piloting your mech around the terrain — currently there’s only two maps — is a joy, thanks to intuitive controls.

You use the left trackpad or stick (depending on whether you’re playing on Vive or Rift) to move and the right to turn. Depressing the left pad/stick sends your mech jetting into the sky in bursts, while the buttons and triggers control weapons and shields. It’s a fairly simple system that, while it takes a few minutes to get used to, manages to nail the feeling of piloting a giant robot.

The game looks pretty good on the Vive and the Rift, but the graphics feel a bit low-res, even on the Vive Pro. The visuals get the job done though, there’s nothing wrong with them, and the feel of the game more than makes up for it’s lack of eye-candy. Sound is excellent, and I didn’t experience any lag during the multiplayer gaming. I couldn’t find anything to complain about in the hour I spent trying to earn my multiplayer stripes, and the single-player experience still merits a play through for newcomers to Archangel.

Archangel: Hellfire is available now, in early access, on Steam and in the Oculus Store — both storefronts are offering it for the discounted price of $19.99. Purchasers will receive the complete Archangel game and the Hellfire beta, while those who purchased the game prior to today’s update should already have access to the beta.