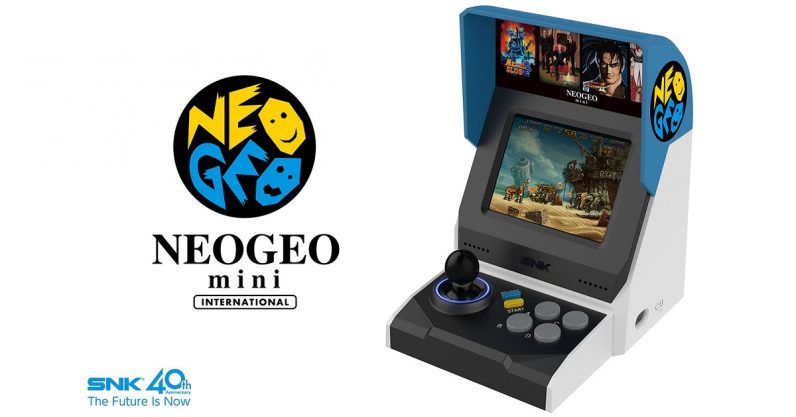 Another mini-console has been revealed, joining a market that’s starting to look a little saturated. The new contender is a miniature version of SNK’s arcade cabinet-cum-home console, the Neo Geo.

The details: The Neo Geo Mini is built like a tiny arcade cabinet, and I do mean tiny: according to SNK, it’s 135mm by 108mm, or about 4.5 by 5.5 inches at the base. Just for reference, the Nintendo 3DS XL is roughly 6 by 7 inches. SNK contends it “fits perfectly in the palm of one’s hand,” and that may be true, but the shape might make it a little awkward for prolonged handheld play.

What sets the Neo Geo Mini apart from the others, though, is the fact that it comes with its own screen. Granted, the screen is as tiny as everything else at 3.5″ square. But if the prospect of eye strain doesn’t sound appealing, the console can be hooked up to an HDMI TV, same as any other retro console.

But what. There’s more: The Neo Geo Mini will come with 40 games on launch, presumably to celebrate the company’s 40th anniversary. SNK hasn’t said which game those will be yet, but promo photos show the console running The King of Fighters, Metal Slug, and Samurai Showdown.

Also, SNK revealed two different version of the console — an Asian version based on the Japanese cabinet with red trim, and an “overseas” version for everyone else with white and black trim. SNK hasn’t said yet whether the two versions will have identical game libraries.

SNK says the release date and game details will be revealed at a later date.

Read next: Google Maps aims to dethrone Yelp with its latest update