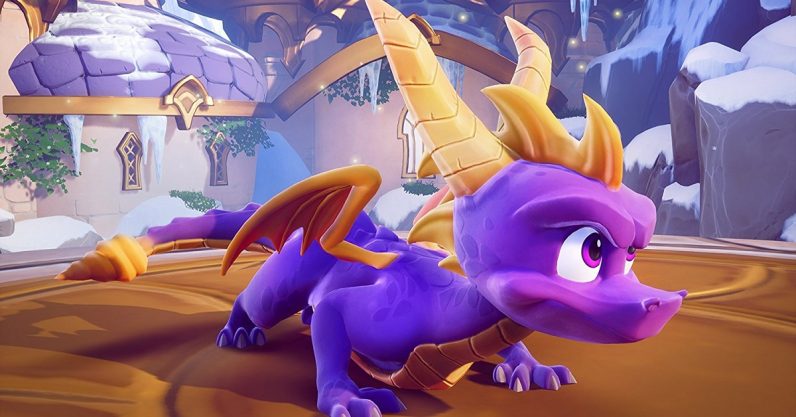 Earlier today, an Amazon leak hinted at the HD remake of the original Spyro trilogy, a remaster long whispered of the in the rumor mill.

A page for Spyro Reignited Trilogy first surfaced on Amazon this morning, with little fanfare. I wanted to believe it, but held myself back. I’ve been burnt crispy by that hype flame before.

Then, shortly after, Activision came through with an official trailer and release date. Witness it, in all its polished glory:

When I was a kid, and just graduating from my SNES teething period, Spyro was my gaming addiction. I still have all the music of every level in Ripto’s Rage lodged so firmly in the deepest recesses of my brain it’d take a speculum and a melon baller to get them out.

The remake looks like the version of Spyro I always saw in my head when I played the games, my nascent imagination automatically smoothing over the jagged polygons of Spyro’s cocked eyebrows and the orange triangles that represented his fire breath.

This is just as exciting for what it isn’t as for what it is. Ten years ago, Spyro was dead to me, having been “rebooted” as The Legend of Spyro, a try-hard, third-person brawler starring a very bored Elijah Wood. If you ever want to experience stomach-churning levels of cringe, watch the trailer for the first game in that series and listen to Gary Oldman say the words “You are a purple dragon — a very special creature.”

Now it looks like we’ll finally get to see our sassy, purple, Tom Kenny-voiced buddy on the big screen again, and I couldn’t be happier.

The game will be released on September 21 for PS4 and Xbox One. If you don’t hear from me by Halloween, someone please airdrop some energy drinks and granola bars on my roof.

Read next: Amazon now lets you use your Echo like a one-way intercom