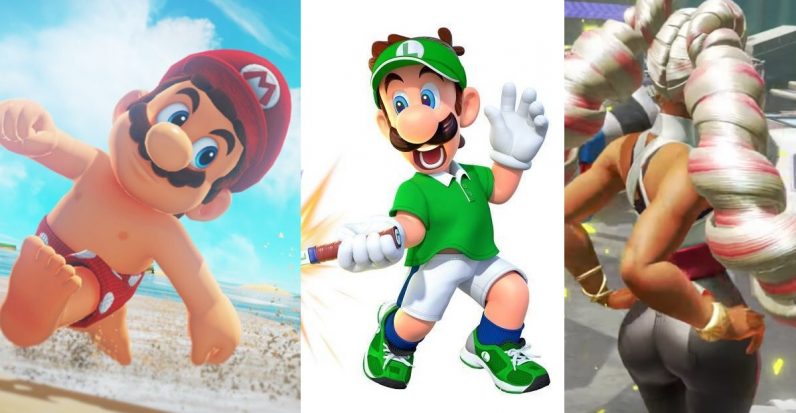 How the heck did we get here? We were having such a nice time not thinking about Nintendo character’s sex lives, and Nintendo themselves shatter that by releasing a picture of Luigi’s…ahem, unmentionables.

Now why would they do this? My best guess is because it’s Nintendo has caught on that their core audience has grown up.

In case you’ve been lucky enough to sleep through it, Nintendo released a picture of Luigi striking a pose with a tennis racket for Mario Tennis Aces. The difference between this and Nintendo’s other promo pics is that Luigi has a slight bulge in his shorts.

The difference between Tumblr and Twitter is that Twitter users are all upset about Luigi's dick bulge because they're so fucking basic and Tumblr users are doing Algebra to figure out that it's roughly 3.7" flacid and they're so happy for him to have a dick. pic.twitter.com/BlQynFRaZd

It isn’t just an image taken out of context by thirsty gamers. Someone had to sit down and deliberately render this.

It’s not the first time Nintendo has shocked the world by adding sexual characteristics to its familiar characters. The world first viewed Mario’s nipples in the Super Mario Odyssey trailer and reacted with equal parts glee and horror.

It’s a weird dichotomy for a gamer — I can pop in a Soul Caliber game right now and play the perpetually under-dressed and over-endowed Ivy without batting a jaded eyelash. But Mario appears shirtless with two tiny dots on his chest and I’m thinking, “Huh, that looks weird.”

It’s not just Mario and Luigi, either. Nintendo is starting to feed its audience slightly more fanservice than it has in the past. Just in its current generation of games, we have Twintelle from ARMS:

And let’s not forget everybody and their goddess hitting on Link in Breath of the Wild.

I’m inclined to believe this is Nintendo realizing their core audience is growing (or grown up). In Nintendo’s financial briefing last March, it tallied up the age and gender demographics of the first wave of Switch buyers. The vast majority of them were male, and 46 percent were between the ages of 25 and 34.

That doesn’t necessarily explain Mario and Luigi’s anatomical correctness, but I do think it’s evidence that Nintendo has pinpointed its core audience as adult gamers who can handle slightly more realistically-shaped bodies.

Of course, if the commotion on social media is anything to go by, their faith may have been misplaced.

Early bird tickets for #TNW2018 are almost gone! Grab yours before prices go up.

Read next: Got questions for a blockchain wizard? Alex Mashinsky is joining us on TNW Answers