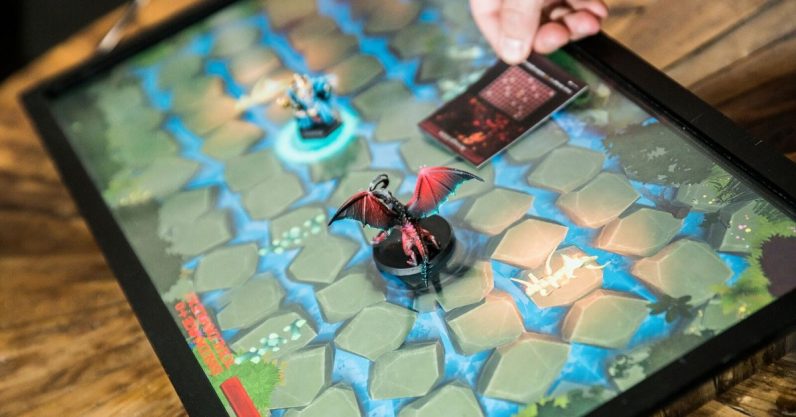 While tabletop gaming is successfully making the transition to noncorporeal form, they can lose something without the physical gameplay elements they’ve always been known for. Enter PlayTable, a blockchain-based console to be released later this year that incorporates toys with digital tabletop gaming.

PlayTable is a large Android-based gameboard, with 72 RFID antennae built into its internal grid. It works with small toys with built-in RFID chips, which resemble Skylanders figures or Amiibo. Created by a company called Blok.Party, it’s designed for use with one-to-eight players.

I got the chance to view a demo of the PlayTable with Jimmy Chen, the CEO of Blok.Party. Chen grew up with board games like Catan. He says PlayTable recaptures the same social experience he’s missed from his childhood tabletop games:

An unfortunate part of my adulthood has been an increased difficulty in getting together with friends in real life to laugh, scheme and have fun together. We made PlayTable to bring people together and rediscover the magic of the communal gaming experience.

The PlayTable incorporates the Ethereum blockchain as a way of saving experience and customization within game-based toys. All data associated with a toy is recorded in the ledger, so even if the piece is traded to different players, it will retain its stats and abilities. Each toy’s stats are updated after every game is completed.

Chen also showed me some RFID stickers with which someone could transfer data from a PlayTable toy to an everyday item, meaning you could turn household decorations or other toys into gameplay figurines.

The blockchain elements of the console come across as slightly gimmicky — other than item sales, all the information recorded on the ledger could probably be recorded on a local server.

One of the games I saw during the demo was Battlegrid, a D&D/Magic: The Gathering-style fantasy RPG in which players battle each other with figurines placed on the PlayTable. When you touch the toy — which could be a wizard or a dragon, for example — to the PlayTable, the toy’s in-game avatar appears on the grid. You can also use gameplay items or cards to create different gameplay scenarios: for example, placing an ice crystal on the grid will cause several tiles to freeze and become impassable.

The PlayTable looks like it still has a few kinks to iron out — for example, some of the figurines didn’t respond immediately when touched to the screen during the demo. The device is still a work in progress, according to its creators.

Chen says the toys are an effective way for PlayTable to emulate the tabletop game experience. “Play, especially open and social play, requires this kind of tangible, visceral interaction and that’s really what PlayTable fosters.”

Other game developers have tried to bring digital elements into traditional tabletop gameplay. Most notably, the Dungeons and Dragons: Beyond digital companion, released last year, offered aspiring players a way to keep track of their characters without pen and paper.

Blok.Party plans to ship the PlayTable to buyers later in the year. The device comes with several games at launch, including Battlegrid.

Disclaimer: Please note that this piece is by no means an endorsement. We encourage our readers to judge the risks of blockchain technology for themselves before investing in an expensive and unfinished piece of hardware such as this.

Read next: No cable? No problem: Here's how to watch March Madness online