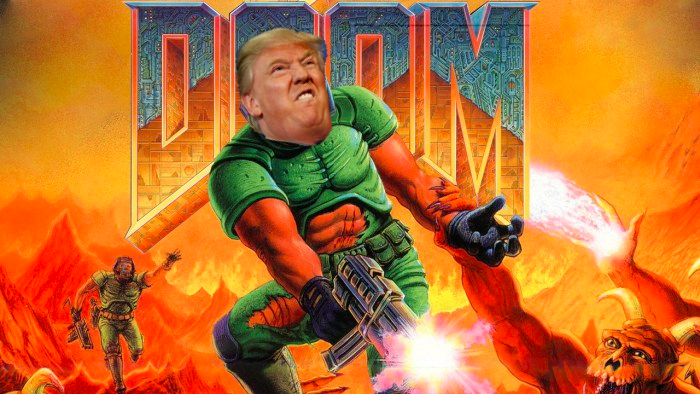 The videogame world loves a bit of nostalgia. Gamers instinctively look to the past, whether that’s to long-beloved franchises like Burnout, or retro consoles like the NES.

But not all throwbacks are good. One thing that’s recently made a comeback (especially in the wake of the tragic massacre at Stoneman Douglas High School, in Parkland, Florida) is the purported link between video game violence and real-life acts of violence.

In the wake of this real-world tragedy, politicians are looking for their culprit in the virtual world.

“You look at the ‘culture of death’ that is being celebrated. There are video games, that yes, are listed for mature audiences, but kids play them and everybody knows it and there’s nothing to prevent the child from playing them, that celebrate the slaughtering of people.”

A few days later, Donald Trump fired off his own volley of nonsensical bullshit. If you need to take an Ibuprofen after reading this, I completely understand:

“I’m hearing more and more people seeing the level of violence in video games is really shaping young people’s thoughts. And then you go the further step, and that’s the movies. You see these movies, and they’re so violent a kid is able to see the movie if sex isn’t involved, but killing is involved, and maybe we need to put a rating system for that. The fact is that you are having movies come out, that are so violent, the killing and everything else, and we may have to think about that.”

There’s a lot to unpack there. Let’s ignore the fact that rating systems for games and movies already exist, and retailers in the US voluntarily (and routinely) prevent minors from buying age-inappropriate content. Fuck knows what Trump is banging on about there.

Instead, let’s talk about how “the level of violence in video games is really shaping young people’s thoughts.”

Seriously? I thought we were past this.

Gaming is (arguably) bigger than Hollywood. In dollar terms, video game sales have long eclipsed box office receipts. No longer is it the preserve of nerdy blokes in their bedrooms, as was the case in the mid-1990’s. Gaming is mainstream, and has been for a really long time.

As a result, a lot of the critical voices have quietened.

In the 1990’s and 2000’s, video game violence was tabloid fodder. I remember how you could barely go a week without the Daily Mail crusading impotently against the likes of Doom, Manhunt, and Carmageddon.

That just isn’t really a thing any more.

Anyone remember Jack Thompson? In the 2000’s, the (now disbarred) attorney made a name for himself by advocating against the games industry, suing the likes of Sony, Rockstar, and Take-Two interactive. Since then, he’s barely been heard from.

I’d argue that’s because people are no longer convinced by these arguments. People have (broadly) realized that gaming is big, and if it really did cause people to commit acts of mass violence, there’d be a bigger body count, particularly in the countries where game consumption is highest. Countries like Sweden, Japan, Germany, and South Korea.

Those still making this argument look inherently anachronistic. But the optics don’t matter, and it doesn’t matter who is making the argument. All that matters is the science.

Put simply, there’s no proven link between gaming and violent behavior in the real world. In fact, the evidence says otherwise.

A study from the University of York, published in January of this year, looked at 3,000 gamers and how violent video games influenced their behavior. It found that games don’t prepare — or ‘prime’ — people to behave in a certain way, and that realism in gaming doesn’t translate into increased aggression.

Discover Magazine’s Christopher J. Ferguson recently published a sterling article on this matter, which looked at decades of research. The most pertinent line from the article is this:

Any claims that there is consistent evidence that violent video games encourage aggression are simply false.

So, why the renewed backlash against games?

Hard questions are just that. Hard. Sometimes, it’s preferable to look for simpler answers, even if they aren’t actually right.

And yeah, going after games is a simple solution that’ll be palatable to many, but it won’t help stop the next high school massacre.

It’s time to grow up and start asking difficult questions.

TNW Conference 2018 offers a whole track dedicated to Future Generations, who hopefully won’t have to deal with this bullshit. Check out more info here.

Read next: Looks like Google is finally building dark mode straight into Android [Update: not yet]