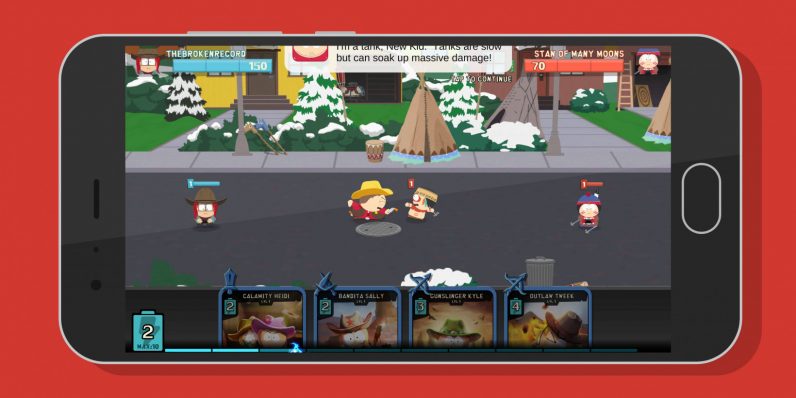 Can’t get enough of South Park on TV? The show now has a brand new mobile game to kill several hours – and poor little Kenny too.

Available for free on Android and iOS, South Park: Phone Destroyer sees you take on the role of the new kid in town, in a game of cowboys against Native Americans. You play the cowboys, obviously. Gameplay consists of dealing cards featuring characters from the game, each with different classes and abilities that help them dish out punishment to the opposing side.

The game doesn’t bother to reinvent the wheel when it comes to card-based RPGs, but its presentation is sure to delight fans of Trey Parker and Matt Stone’s beloved cartoon. You can watch the battles unfold on screen as you play your cards, manage your energy, use special abilities, and strategize your way to victory. There are both player-vs.-AI and player-vs.-player battles to engage in, though you’re better off tackling others a little later on in the game, once you’ve got enough resources to bring to the table.

You can customize and level up your card deck, spend on in-app purchases to get new card packs, and score rewards to use in future battles. As with most free games, there are several microtransactions to deal with, but you can get in plenty of play without spending any real money.

Overall, Phone Destroyer is a fun take on the card-based battle genre, and the interface and gameplay work well to create a satisyfying experience – even if you’re not a huge fan of South Park. Just try not to empty your savings in your quest to defeat every other player you encounter.