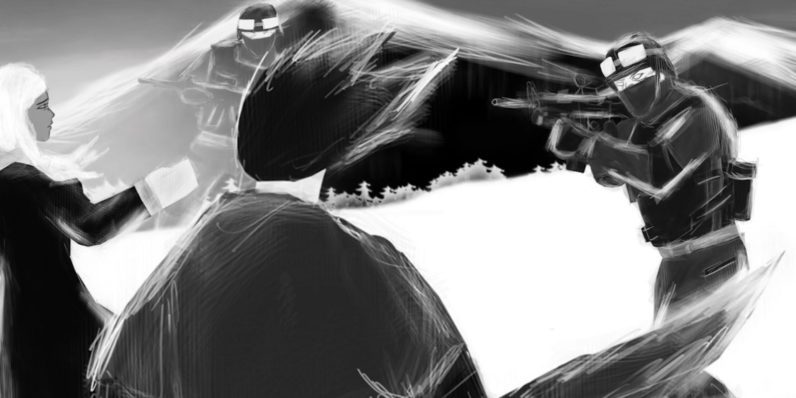 The Man Came Around is a survival RPG about trying to escape a fascist dictatorship within a powerful nation. It’s full of trauma, stealth, moral choices, and death — so, you know, fun.

The game, made by Belgian studio Pipette Inc, went live on Kickstarter yesterday.

This game is bleak. Think Oregon Trail if it were written by Leo Tolstoy. You could also easily draw comparisons with Papers, Please or This War of Mine.

You control five distinct characters fleeing their totalitarian home country by way of a fence in the mountains. You have to manage their scarce resources, keep their trauma to a minimum, and try to keep as many of them alive as you can until you reach freedom.

Normally I wouldn’t give a Kickstarter game a second look. But The Man Came Around‘s obvious political leanings made it difficult to ignore.

The studio is not shy about it, either. Thierry Brimioulle, founder of Pipette Inc, says the game is inspired by modern politics:

One year and a half ago, I asked myself what I could to do to make the world a better place. I decided to use my games to relay progressive values. Why? Because I believe that to counter hateful speeches and right-wing rhetoric, you need to propose better ideas to the widest audience possible.

That, combined with the distinctive art style and epic music, gives The Man Came Around a dark but fascinating appeal.

If you want to check it out for yourself, the demo is available for download on itch.io.

Read next: Google's new app lets you order food and call a plumber in India