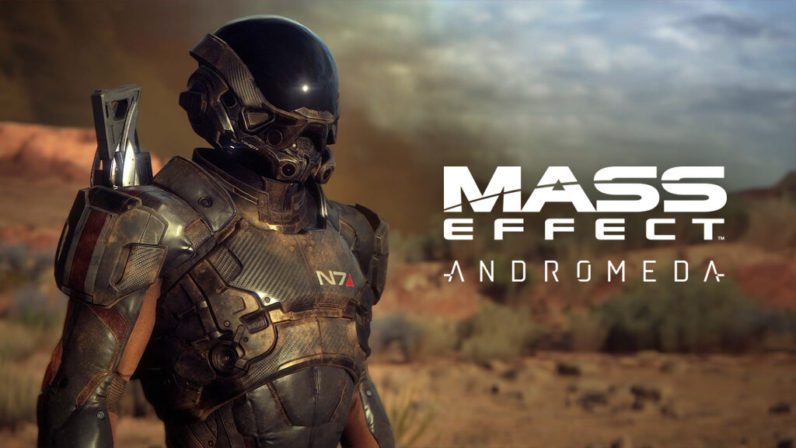 Scattered throughout my living room is the tangible proof that 2017 is already off to a great start when it comes to Good Ass Video Games™. We’re not even four months in and we already got Horizon, Nier: Automata, Resident Evil 7, Yakuza 0 and a new Zelda (aka the best game in recent history). I hoped to add Mass Effect: Andromeda to that list but alas, BioWare’s latest doesn’t come close to the greatness that 2017 graced us with so far.

Don’t get me wrong, I hecking love the Mass Effect series. I’ve been a fan from back in the KOTOR days, when BioWare still used the Star Wars license to make the games that eventually led to the Mass Effect series. Even the deeply flawed KOTOR 2 is one of my favorite RPGs ever and Mass Effect 2 is probably in my top ten favorite games of all time. Telling you that Mass Effect: Andromeda, the fourth game in the series, doesn’t even come close to that coveted top ten brings me no pleasure.

With Andromeda developer BioWare aimed to reboot the Mass Effect franchise after it wrapped up the first trilogy back in 2012. This fourth instalment introduces a new protagonist, a new universe and a new time period – 600 years after the first trilogy. The exact reason and most of the details escape me but this is what Wikipedia says about the plot:

Mass Effect: Andromeda begins in 2185, between the events of the second and third games in the original trilogy. The four Citadel Council races and the Quarians are planning to populate new home worlds in the Andromeda Galaxy as part of a strategy called the Andromeda Initiative. Each race sends 20,000 citizens on a one-way, 600-year journey to Andromeda aboard their own transportation vessel, called an Ark, and selects a leader, known as a Pathfinder. Once the races arrive, they help build the Nexus, a huge space station that serves as a center of government and diplomacy, a living area, as well as a base of operations for the Pathfinders.

Excuse my lack of interest, but that’s what this game has been doing to me. I just can’t bring myself to care about the new cast, the new setting or the new story. The first three Mass Effect games had some of the best writing in the history of the medium. The writing was so good that it was easy to ignore the average gameplay as those moments were simply little speed bumps in between the amazing dialogue, written for the stellar characters. Unfortunately those qualities are pretty much non-existent in Andromeda. Every line of dialogue is clumsily written and poorly delivered. Add the horrible facial animations to the equation and you end up with a game that has very little redeeming qualities.

Somewhere down in the core of Mass Effect: Andromeda is a glimmer of a game that would have been amazing with the right amount of polish. The idea of exploring and settling in a new galaxy could have worked out great and every time you colonise a new previously-uninhabitable planet you’re reminded of what Andromeda could have been. The combat has improved compared to the original trilogy, but that’s about the only nice thing I have to say about Andromeda.

Now is not the time

BioWare is well aware of the game’s buggy state and the developer promised to fix the game with a series of patches. It’s clear that EA rushed this game out the door to get the first week sales in before the end of their fiscal year, which ended ten days after the game’s premature release. Releasing a buggy game early just to appease your investors is a dick move and horribly anti-consumer. Early adopters and people who pre-ordered the game get screwed, not just by paying full price for an unfinished product, but also by the fact that they’re playing a game in its worst state. If you really want to play Andromeda I strongly suggest you wait a couple of months until the game is actually done. The writing is still going to be poor, but at least the game won’t be as buggy. You can probably find it in the bargain bin by then.