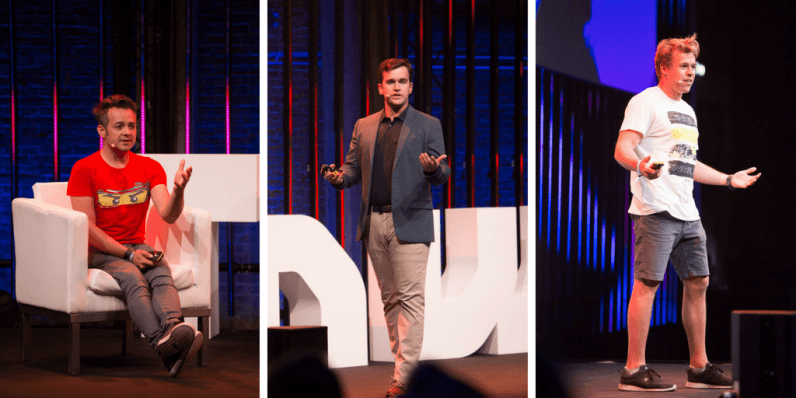 Technology has a great impact on how we consume and interact with sports. Something as simple as a video assistant referee has already altered the FIFA World Cup — so what can we expect for the future?

Kevin discussed how the rise of technology has enabled him to become a professional athlete in a rather niche sport. He shared his personal journey on the road to becoming the best kitesurfer in the world.

“I was basically hooked from day one,” he said. Kevin also shared a rather endearing video of him as a young kid being interviewed about his kitesurfing heroes. He’s sporting some slick shades and an epic bowl cut — that image alone makes it worth a watch.

In 2001, Kevin got to meet his heroes during the world cup, held on the Dutch beach Scheveningen. “I got so inspired that when I was 12, I decided to go pro,” he explained.

This kickstarted his professional career — he got sponsored and worked hard for recognition in the media, but found little success. “I decided that I had to become the world champion to get maximum exposure,” Kevin said.

It took him nine years to achieve that goal, and along the journey he finished in second place three times in a row:

That’s something you don’t want to be if you want to be the best. Being second feels like being the first loser.

After he became the world champion, Kevin still struggled to see results in the media. Kitesurfing simply couldn’t compete with football or tennis, so that forced him to get creative.

Kevin couldn’t afford to hire a camera crew to travel with him, so he filmed his own movie called Hidden Lines, using a small camera that fits in his pocket. He published it online, and it exploded overnight — suddenly Kevin realized the power of the internet.

Through social media alone, Kevin can support himself as a professional kitesurfer. You can hear more about his fascinating job by watching his full talk above.

Nicholas is the founder and CEO of The Drone Racing League, which is — you guessed it — a league of drones that race. He described it as “a mix of Star Wars and Formula 1,” which immediately intrigued the audience.

Within three seasons, the DRL has already achieved amazing success. It’s broadcasted in 75 countries on high-profile networks like ESPN. It attracts over 55 million viewers, and boasts sponsors such as BMW, and investors like Sky Sports. Drone-racing clearly has a place in the future of sports.

Nicholas explained why drone racing is so popular, and he walked the audience through the differences between traditional sports and esports. Essentially, robotic sports takes the best elements of each, and creates something completely unique for the viewer. “It’s described as a real-life video game by our fans,” Nicholas said.

While enjoying great success, there are also limitations to robotic sports:

Getting advanced technology to work in a sporting environment is very difficult. When your phone crashes it’s not the end of the world, but in a sporting context, technology failing interrupts the flow of the sport.

Nicholas said that technology is improving, which means that the DRL is just the beginning. From huge fighting robots to robotic car races, we can expect to see robotic sports rise in popularity — and drastically change the sports landscape as we know it.

You can watch his full talk above to see some drone racing in action.

Andy described how the sports landscape has shifted dramatically with the evolution of recent technology. He argued that while it’s hindered the joy of athleticism, it can also enhance the experience if we harness it correctly.

The book is a blueprint for what we don’t want to do in the future, but it can also serve as a manifesto for rising up against technology, and to reimagine it.

This summed up Andy’s attitude towards the future of sports: from genetic modification to wearables, it’s up to us to decide how far we take everything. Andy dove deeper into society’s fascination with altering our DNA to ensure certain traits, and made parallels to the movie Gattaca. He also discussed how wearable technology can radically alter sports, for good and bad.

You can watch Andy’s inspiring talk above.

These are just some of the amazing speakers from the Offside track. We partnered with CROWD to make this one of the most exciting tracks at this year’s TNW Conference. You can watch more talks right here.

Read next: Report: Apple considered removing the charging port from the iPhone X