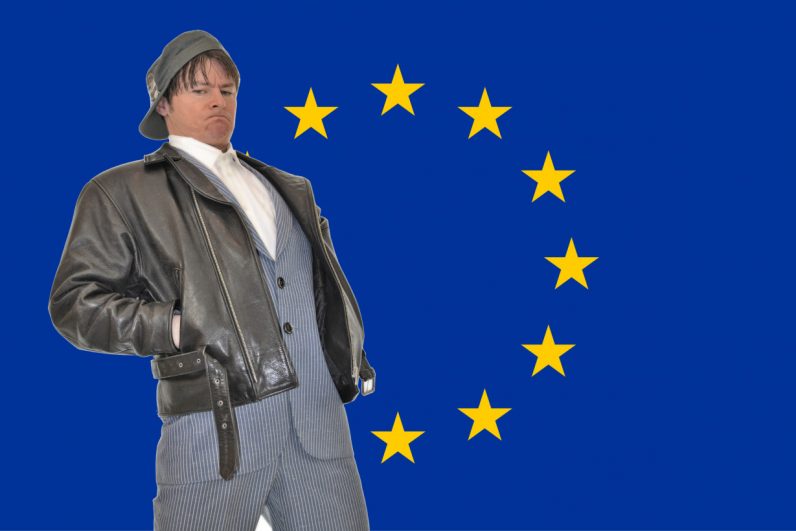 “He told me that my ‘project’ is cute and let’s discuss it in bed.”

“He suggested I should start sleeping with him in order to learn more about the ecosystem and succeed.”

“I was at a work event at a hotel talking to a VC about my company. We both have drinks, but this is a work event and no one is drunk. After I told him about our startup, he said ‘this is very interesting. Why don’t we go upstairs to my room and spend the night together. You can tell me more about your business then.’ I got up and left. The next morning I had a message from him saying he never wanted to offend me, but does not regret what he said.”

“He said I feel like we have different approaches to the relations between genders. You are more partnership-oriented, and I am more patriarchal. I’m used to used to women doing what I tell them to do.”

Are these scenes from the fictional TV show Silicon Valley? What about Mad Men? Nope. They  are real-life experiences from women entrepreneurs in Europe who are pitching their startup to investors.

According to our most recent Women Who Tech online survey of close to 100 women founders across Europe, 58 percent said they have experienced some form of harassment. This number increases to 75 percent among founders who are women of color. And 24 percent of women founders say they have experienced sexual harassment from either an investor, client, employee, or journalist. #Gross

Sadly, these stories and data don’t shock me anymore. We originally launched Women Startup Challenge Europe because of the severe lack of funding for women-led startups. A mere 12 percent of founders at EU companies that received VC funding are female, according to data from TNW’s Index. Many say it’s a pipeline issue. But we’re not seeing a pipeline issue: more than 2,000 women founders have applied to our Women Startup Challenges thus far.

After hearing from several women founders about their experiences raising money for their startups, and verifying our suspicions that it wasn’t a pipeline problem, we reached out to women founders to try to get to the bottom of this problem. Our follow-up to last year’s tech culture survey clearly illustrates that the funding problem in the EU is also deeply connected to unconscious biases and harassment that many women experience when trying to raise capital for their startup. If the startup and investor communities continue to tolerate discrimination and harassment, we will lose out on major innovation by shutting out game changing startups who have the potential to solve some of the world’s toughest problems and, in turn, make investors billions.

Discrimination is deeply intersectional. And if these women’s experiences in the EU aren’t enough to prove that the startup sector and investor communities have a serious problem, and can’t seem to stop the harassment or discrimination toward women founders, we’ve got a few more alarming statistics from our survey for you.

About 30 percent of women founders said they were told that they were more likely to get funded if they were a man or had a cofounder who was a man.

One woman founder said that a legal advisor told her in a private meeting that investors saw funding her startup at a higher risk than startups led by men because the men could easily fall in love with her.

11 percent of women founders said they were touched inappropriately, groped, or propositioned for sex by an investor.

Several founders also said that in addition to the overt discrimination and harassment, they also experienced more subtle and unconscious biases.

For example, one founder surveyed said that while she raised a seed round of £750,000, she was questioned more extensively on her profit and loss knowledge by investors versus other companies pitching at the same time. She also found that despite having a more solid idea and large enterprise contracts, investors tended to gravitate toward male founders with less solid business cases. “I feel like it took me longer to raise funding as a woman, and had I been a man I would have raised 50 percent more,” she said.

Similar experiences by women founders were also highlighted in a Harvard study which revealed that funders asked women founders questions related to “prevention” or how they will defend and support their strategy and prevent failure versus funders asking men questions related to “promotion” and their future vision for the product. The study concluded that these unconscious biases by investors severely impacted the funding that women-led startups receive, despite the data proving that founding teams that include a woman outperform their all-male peers by 63 percent, according to First Round Capital, who compared their portfolio’s performance data over 10-years.

Even after all of this time has passed since Susan Fowler and startup founders publicly shared their experiences about the harassment they faced by both investors and at companies like Uber not much has changed. Tweets have been posted thanking women for coming forward. Women founders continue to be harassed and treated differently and remain severely underfunded.

Women sharing their experiences is certainly one critical step forward, but for real impactful change to happen, investors, especially institutional investors and LPs, need to step up in a major way and break up this mirror-tocracy and toxic culture that has pushed women and people of color out for far too long.

Women Who Tech anonymously polled 99 women founders, investors, and tech employees, on their experiences raising capital and working in the startup sector between July 3- 18, 2018. 83 out of 99 women surveyed were startup founders. The survey was conducted and the data analyzed by the polling firm Lincoln Park Strategies. Some data and findings may vary when compared to the industry at large.

This article is the second in a series of articles about women founders in the European tech scene. TNW’s publishing these in collaboration with Women Who Tech, a nonprofit organizing its seventh Women Startup Challenge in Paris – for which you can still apply until August 7.