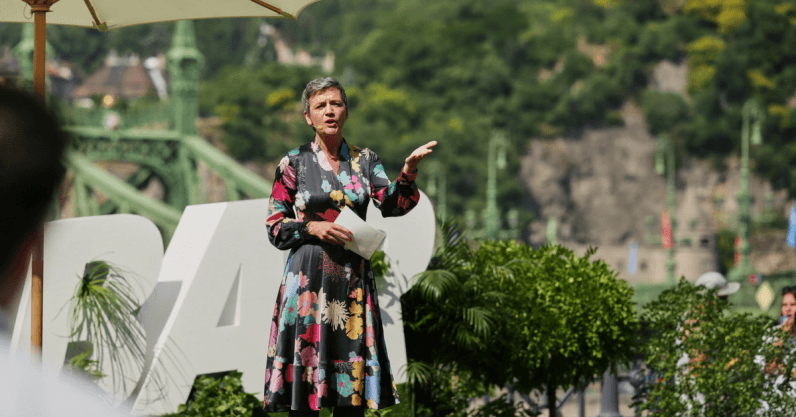 Next year is going to be horrible for tech if we take movies like Blade Runner and The Island seriously. In 2019 we’ll have dedicated islands to clone organdonors and androids will run amok, doing god (or singularity?) knows what. But for Margrethe Vestager, EU commissioner for competition, these dystopian movies have a fundamentally flawed vision of the future.

“They forget that technology is our future, it’s not our fate,” said Vestager during her talk at Brain Bar in Budapest. “They’ve forgotten that our societies are about much more than technology. They’re built on a far deeper foundation of values – values like freedom, and fairness, and democracy. And that’s why those dystopias don’t quite ring true. Because in fact, we don’t just accept what technology gives us. We can shape it to fit our society’s values. So technology serves people – not the other way round.”

Vestager’s optimism is understandable when considering the amazing success she’s had in reining in the technological giants of our time. Under her leadership, the EU has fined Google €2.4 billion for illegally promoting its own services at the cost of its competitors, exposed illegal state-aid Amazon and Apple received, and forced them to pay back owed taxes — just to name a few. Given her accomplishments, it’s curious to see how she views the current state of tech in society.

During her talk on the sunbathed bank of the Danube, Vestager emphasized the power regular people have in shaping the future. In her mind, we the people aren’t at the mercy of big tech — it’s the exact opposite.

“We’re dealing with businesses. They are indeed big. They are indeed powerful. But we as a society, we’re powerful too. In Europe, for instance, we have a single market of 500 million people. We’re a lot of people and it’s a lot of power when we come together. And that is definitely power enough to make big companies pay attention as well.”

Vestager hasn’t shied away from using the immense power of the European collective. When dealing with big companies and powerful people, she’s said she feels empowered knowing she represents half a billion citizens. One of the ‘powerful people’ she has dealt with is Tim Cook, who paid Vestager a visit in Brussels back in 2017. He was furious with Vestager’s decision that Apple owed Ireland a whopping €13 billion in taxes and called the findings “political crap.” Vestager wasn’t fazed.

“I think it can be no surprise for businesses that if you want to do business in this amazing market of 500 million potential customers, we have the willingness to regulate,” explained Vestager. The EU has always been clear since its founding that it would build a framework for the market democratically – creating regulations on working conditions, child labor, animal welfare, and now on digital services.

I think we’ve started to see that now is the time for citizens to take control over essential things, like what happens to your data. Until recently, there’s been a sense that companies could treat our data as something just lying around for anyone to pick up, like prospectors in a gold rush collecting nuggets from the ground. But those days are over. I think we understand now that we hand over our data it has a cost, because every time we share, we give up something of value.

Vestager fully realizes the positive value data has to improve our lives, but she believes it’s important to understand the cost data-based innovations have. “I don’t think anyone will accept the benefits if we just have to accept the dark side as well,” said Vestager. In her opinion, it’s clear we can’t have innovation without trust and that’s exactly what legislation and enforcement of law can provide.

In Vestager’s view, Europe’s new GDPR – which she acknowledges sounds like an ominous entity straight out of dystopian sci-fi – has only the simple mission of putting the control over data where it belongs — to the people who own it. Vestager says GDPR directly affects her job as an enforcer of law and fairness, because it improves the relationship between people and tech by providing individuals guarantees of how their data is used. “This is a way of creating trust. And without trust, we’ll never get the most from technology.”

One of the ‘dark sides’ of allowing companies to freely use our data is the threat to democracy, which shouldn’t come as surprise to anyone after Facebook/Cambridge Analytica scandal. But for Vestager, democracy isn’t just executed in elections — it takes place every single day.

“Democracy is not just about voting. Democracy is about discussing ideas in public […] in a way that everybody has a chance to be heard,” explained Vestager. That’s why the EU’s case against Google, under Vestager’s leadership, was so important.

Google unfairly promoted its own shopping services at the cost of its competitors’ and took advantage of people’s belief that Google’s algorithm would show them the most relevant searches. If Google’s shopping shows up first, and all the rivals show up on page four, then Google’s service has to be the best one, right? Maybe, if Google hadn’t rigged the system by allowing its services to bypass the algorithm and show up on the first page.

“Algorithms are great helpers, they allow us to find things on the internet that we would otherwise never find. But the risk is that we only see these algorithms – and what the companies choose to show us. And the things they choose to hide might just as well not exist. That’s a serious threat to our democracy.”

Funnily enough, in Vestager’s mind, this problem was illustrated well by the recent internet hit of the Yanny or Laurel soundbite. “The clip was a sensation and I think the reason is really simple. It challenged our belief that we hear the same thing, that there can’t be two different interpretation of what you hear in a soundbite,” said Vestager. “I can’t tell if you hear Yanny or if you hear Laurel. I can’t debate ideas that I don’t know is being presented to you.”

Some people — for example those who subscribe to Tim Cook’s way of thinking — might say the best way to go is to allow the tech companies solve their own problems, otherwise you might risk hurting innovation. Vestager disagrees:

That makes no sense. Supporting innovation doesn’t mean accepting every new thing, just because it’s new. The job of an innovator isn’t just to come up with new ideas.

They also need to convince us that their product is worth the price. And when we insist that technology doesn’t harm our values, that doesn’t mean we’re rejecting innovation. It just means we need to be sure the price is not too high.

Vestager also adds that the tech companies that not too long ago transformed our world with new ideas have become the establishment. “They have the power to protect their position, by holding back the next generation of innovators. But our competition rules allow us to protect innovation – as we’ve recently done with Amazon, and as we keep doing when we check that mergers don’t give companies so much data that no one else can compete,” said Vestager.

Vestager’s impressive five-year term will come to an end in 2019, but she’s already made it clear that she wants to carry on her role for another term. Seeing that she’s one of the EU’s most visible and accomplished politicians, it wouldn’t be surprising if Vestager will carry on “putting people, not technology, back in control.”

Read next: 5 psychological tricks to make people buy your stuff