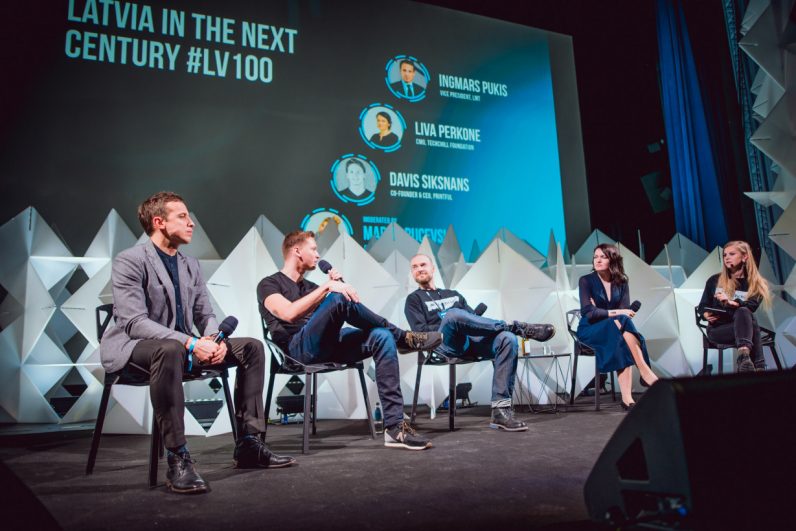 In recent years we’ve been continually impressed with the small Baltic country of Estonia, which has been a frontrunner in many areas within digital solutions and tech innovation, such as e-residency, digital policies, and national cryptocurrencies.

So when I was invited to attend the conference TechChill, taking place in Estonia’s neighboring country, Latvia, I was intrigued. What’s going on in Latvia?

The conference took place last week in the country’s capital, Riga. It attracted 2,000 participants from all over the world, who all had one common passion – tech and startups.

When you think Latvia, you (like us) might not immediately afterward think either tech nor startups. But they are keen to change that. Here’s how:

“We need to modernize our economy and the best and quickest way to do that is to support the country’s startup-ecosystem,” says Arvil Asaredens, Latvian minister of economics, as he explains me the motivation behind the Latvian startup-law.

January last year, Latvian parliament passed a law unlike most others in the EU. The startup-law was voted unanimously through parliament and it provides startups in Latvia with some significant benefits. Startups will abide by a flat tax regime, where each employee currently will pay €252 per month, regardless of what salary they get. And even more significantly, if a startup employs highly qualified people with Ph.D.’s, all social contributions and salary taxes are covered by the state from EU funds.

Besides making it really nice for Latvians to start up companies in their home country, the government also plans to implement a startup-visa, a residence permit for foreign people employed in Latvian startups.

Arvil Asaredens is one of the main brains behind the law. “Latvia has a long history of traditional industry such as manufacturing, lumber-industry, and food-industry, but the country has and still is, experiencing a painful brain-drain”, Asaredens explains. He thinks that by putting political effort into supporting a startup-ecosystem in Latvia, it can quickly change the gears of the country’s industry and increase demand for a more high-skilled workforce.

“These goals are not unattainable,” Asaredens explains. “Latvia is a small country, and therefore we can implement changes to our society quite quickly, and that’s good.”

However, despite the country’s small size, implementing change will still demand a joint effort from political and private forces. The fact that the law was passed unanimously through the Latvian parliament is one indicator that there is political will to create a startup-ecosystem in Latvia, Asaredens explains.

Egita Polanska is the chairwoman of the board of the Latvian Startup Association, Startin.lv. She also agrees that the startup-law is an important step for Latvia in order to create better ground for new and innovative businesses:

Startups are in tricky situations because they need money, and at the same time they are often racing against time. This law minimizes the funding pressure and gives startups more time to work on their actual product, instead of finding funding. This is really important because if there is anything more valuable for a startup than money, it is time.

Egita also points out that once a startup-ecosystem takes form, it very quickly creates ripple-effects. She mentions Estonia as an example of a country of similar size and means as Latvia, and they had the success-story of Skype.

“When the ecosystem is there, the people who have started up these kinds of successful companies become invaluable, they inspire and they work as important mentors,” Egita says, “and you can already see the first ripples starting to effect, look at TechChill! Two years ago it attracted 400 people, this year there are 2,000.”

Being shy never got you anywhere – says who?

The final panel discussion of the TechChill conference was called “Latvia in the next century” Here five Latvians who all are involved in the country’s startup environment came together to discuss the future of Latvian industry and innovation, and what challenges lie ahead.

I felt that the discussion manifested the feeling of nervousness and excitement that had defined the atmosphere of the conference. Where does Latvia stand in terms of innovation, and will it ever manage to step out of the shadow of Estonia?

There was a general consensus that Latvia was one the right track towards becoming a place for startups to thrive. Davis Siksnans, CEO of successful Latvian company, Printful, had this to say:

We need to be mindful of what exactly the goal is – we need to think about us as a country, and create solutions that work for us, and not blindly try to imitate the US and Silicon Valley. We are a small country and small countries face challenges of standing out in the crowd. But whenever you want to compare yourself to a bigger country like the US, remember this: Big countries suck enormously!

Ingmars Pukis, vice-president of LMT, Latvia’s leading mobile operator nods in agreement with Siksnans. He says that Latvians tend to undermine themselves. “The average Latvian exports more than the average Chinese, and still we continue to look to these big countries like China and the US. It’s stupid.”

“You are not a typical Latvian,” Ernest Stals, CEO of analytics company Dripit.io, notes. “Latvians are shy – that is, in my opinion, our biggest problem. I wish we could kick out our talented people and tell them to go out of the country, travel, look people in the eye and network, and then come back home and use their knowledge here. Stop being shy!” he shouts in the end.

This gets Marija Rucevska, CEO of TechChill and moderator of the panel, to clap back. “What is so bad about being shy? Our Finnish friends are famous for being notoriously shy and introvert, but they’re doing great. I agree with Davis, big countries suck, let’s embrace being small and shy, and continue to compete with Estonia about being the best tech startup hub in the Baltics!”

The discussion gave in interesting glimpse into the inner workings of a nation trying to change industrial gears. TechChill was an event that oozed of confidence, but at the same time, it was honest and open about the anxiety that comes with trying to redefine yourself – especially when you’re shy.

The question that now remains is whether Latvians will need to ditch their shyness or embrace it in order break out of their shell and establish a competitive startup scene.

Read next: Google's awesome doodle-guessing AI gets an update for Chinese New Year