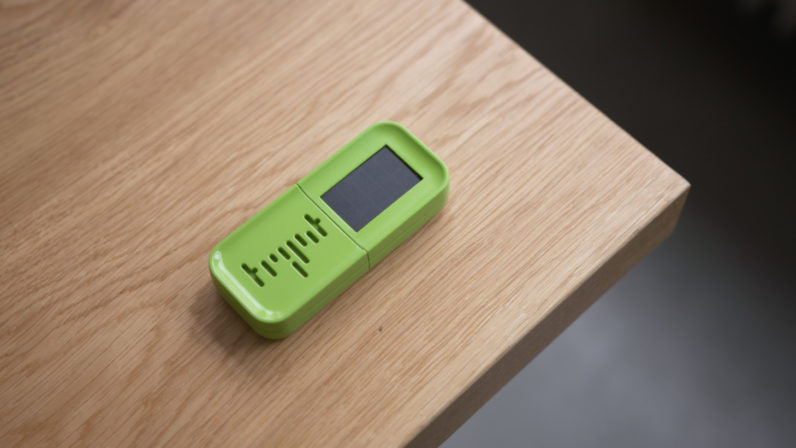 It’s fitting that a solution for harnessing weak amount of solar energy comes out of the rainy Netherlands.

There are already a staggering amount of IoT devices around, but predictions show that number might quadruple in the next three years to 20 billion devices. This is terrible news for the environment and lazy people as many of those devices will run on batteries. That could possibly mean billions of discarded batteries, or millions of wasted hours recharging batteries.

Fortunately, Tryst Energy, a Dutch startup, has found an innovative way to power IoT-devices with solar energy with a product called Light Energy.

We reached out to Nick Kiran at Tryst Energy to learn more about the project and how it came to fruition.

Kiran says that one of the inspirations that lead to Light Energy was Tryst Energy’s staff’s frustration with the amount of batteries they had to use when developing IoT-hardware.

Every month they had to throw out hundreds of batteries that had been used up during testing. Fixing this problem was a way for Tryst Energy to contribute to making IoT-development smarter and easier.

More than a few businesses in IoT get killed because of batteries that need to be replaced every three to five years. Sending someone to replace them, buying new batteries or even completely replacing entire IoT-products leads to tremendous amount of waste.

It‘s true that Light Energy would prevent tons of waste, if implemented on a large scale, as the new model would last for 75 to 100 years — and that’s in worst-case-scenarios. It‘s crazy to think about a current IoT-device still running in 2117!

You don’t need to be lit to be green

What makes Light Energy a palatable is that it doesn’t need direct sunlight. The small module is fitted with incredibly efficient light receptors that will be able to power IoT-devices located in poorly lit spaces.

Light Energy is like solar power but on steroids. It’s ridiculously efficient and works from only 200 lux, or in other words: from under your desk where there is almost no light. And it provides enough power to keep your IoT-products going, including radio frequency like Bluetooth LE or LoRaWAN.

The module combines custom-made energy harvesting circuit and a tiny solar panel (35×20 mm) which can power thousands of IoT-applications. Needing only four hours of 200 lux light to operate for 24 hours makes Light Energy an extremely viable replacement for disposable batteries.

Energy Light is designed to be incorporated into all kinds of projects and the people of Tryst Energy hope it will catch on. The module can generate a maximum power of 25mA and can store the energy in a supercap, which is enough to replace battery all together.

Currently Tryst Energy has three versions of Light Energy available through their Kickstarter campaign: environment sensors, movement sensors and an open-ended one for devs to play around with.

When will it become a reality?

The Light Energy module is not a prototype, it‘s actually a fully functional version. Currently Tryst Energy is launching developer kits on Kickstarter to get startups and developers in on the non-battery future of IoT.

After our Kickstarter we are going to produce Light Energy harvesters as OEM-modules as well, so every product developer, startup and enthusiast out there can start building a brighter world for tomorrow, without having to use batteries ever again.

We need a better way to power our sensor-filled IoT future, and doing that without batteries sure as hell looks like a great way to achieve those goals.

Read next: T-Mobile's insurance now includes AppleCare for free in the US