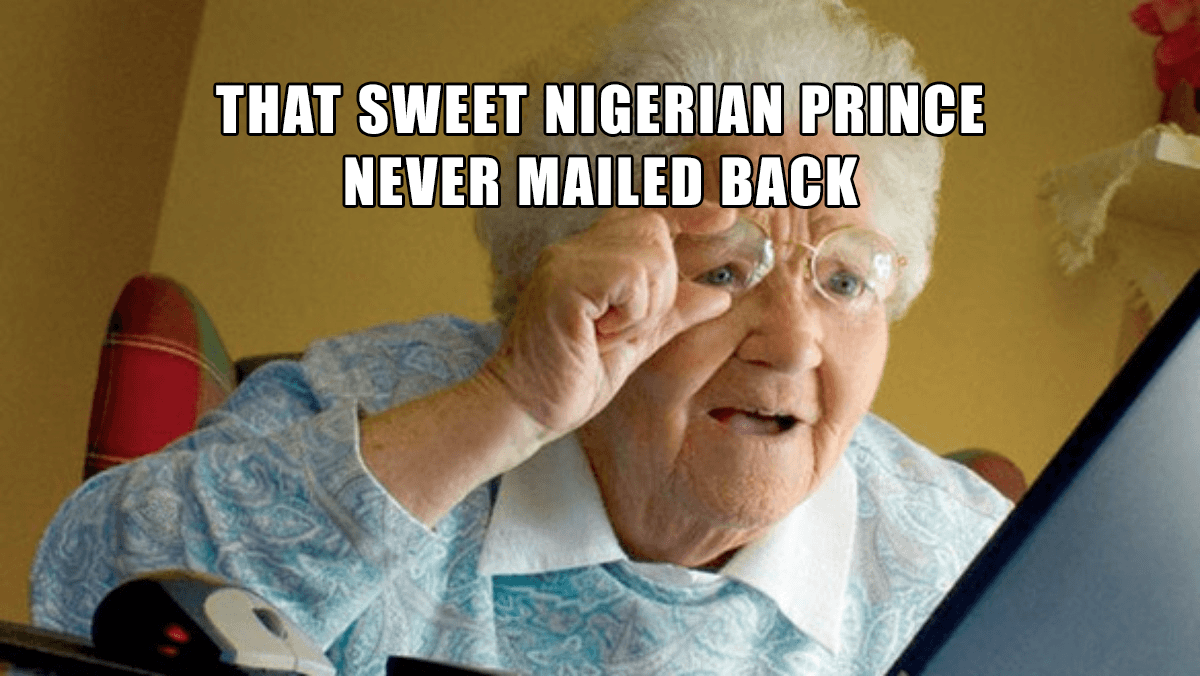 Remember the Nigerian Prince email scam? It goes something like this: “I’m a very rich Nigerian Prince with a cash flow dilemma, and if you give me money today, I’ll give you more money tomorrow.” I’m paraphrasing, but you get the idea.

This scam is funny now, right? Bill Hader recently starred in an Apple commercial celebrating the troubled royal in need of cash. Even Siri is in on the joke.

I usually love a good jab at online scams, but I’m a little raw these days.

I recently got together with a bunch of my ‘founder friends’ for drinks and details. We had all closed nice rounds recently and, as per usual, decided to get together for a night away from the office to blow off some steam. Each of us shared the details of how our round came together, the metrics, the people involved, etc.

At this dinner I realized I was sitting next to the Nigerian Princes of Silicon Valley. Each of them had run what I would consider a scam, or what some might call “hacking a round.”

As an entrepreneur who has raised capital with three different companies and helped friends raise even more, I am not shy about selling the dream, and I recognize how much energy and imagination it takes – but what I heard from my peers was nothing short of Goldman Sachs Elevator material. Check out @GSElevator on Twitter if you haven’t – it’s amazing (and awful).

Over drinks, one of my buddies was sharing how he started out this round by sending the following email:

Great News! Remember that fundraising round I told you we were about to open? Well, we opened it last week and we are set to close $1.25M, we have room for $250k. We have three folks who want it, but since we like you we would like to give it to you, but we need to know in the next 72 hours.

Please let me know if you are interested. We have lots of momentum and so we want act fast, hope you understand.

Isn’t this the Nigerian Prince scam adapted to Silicon Valley? False sense of supply and demand, act fast or lose out, mixed with sleight of hand? In this instance, instead of a prince born to a king, insert a CEO knighted by investors.

Raising a round is hard – and it hurts to hear “no” over and over and over again. But this sort of bum rush letting people get that last taste just feels like a sad attempt to create a swirl. I would be curious what the retention rate on investors is for these founders that run this process.

I got an email a few weeks ago from one of the buddies I invest with – a Series A funded company was looking for a bridge loan of $2M – they claimed to have $1.5M ‘locked in’ from a MAJOR player in the space, and only needed $500k and the bridge would be done. They thought our team would be great for some pretty solid reasons, and so we decided to take a look.

They flooded us with details, numbers, everything an investor would want to see before investing… in fact it was too much info.

You know how in some movies there is a scene where someone says “it’s quiet, almost too quiet…” – this was the opposite of that. I thought about my friends who had recently raised ‘the last $250k’ of their round $250k at a time, six times over… and I felt kind of sick to my stomach. I had just been sent an email from Nigerian Prince 2.0.

I called the CEO, and asked him why they needed a bridge of $2M from new investors considering they had already raised $7M? He was quiet…

I chimed in – “it can only be two things, either your investors don’t know you need the money but you can raise a bridge without permission, or you didn’t hit your numbers and you think you have an ace up your sleeve, and you want runway to get it so you can raise a nice, healthy B…” — He admitted it was the latter, and started to sell me on this ace like it was the second coming.

Needless to say, we didn’t invest. The bridge terms weren’t consistent with a company in that spot, and the founder wasn’t honest from the jump, so we passed.

I learned last week that the MAJOR lead of this bridge that was ‘locked in’ for $1.5M didn’t ever fund. I wasn’t surprised.

Scam 3: We are oversubscribed, but I can let you in

This is one of my favorites. I have a friend who has started three companies, and each one has started with the same story – he is about to open his round but they are already oversubscribed.

Every time we would connect he had his chest puffed out like King Farouk, however every time we would get together I noticed that despite the fact that his round was full before he even opened it, he would be able to cut friends in, essentially carve out $250k – because of past things, because he likes you, etc.

I saw him raise over $2M over the course of two companies on rounds that were ‘over-subscribed.

Now, unlike the Nigerian Prince who operates from afar, this was hand-to-hand combat with a heavy personal con game being run. It was amazing to watch, and I admired the guts it took to say he had the chips in his stack and the cards in his hand despite the fact that we weren’t even at a table… but I learned something from him… I call it BYOT – bring your own table.

I want to issue a call to founders: Stop it. Stop playing this game, stop making shit up, and start building something people want.

It is hard to raise money, we all hate it, but it is what we signed up for. Companies that raise seed rounds running fast and loose are setting themselves up for a hard future, and companies that can’t raise money being honest probably aren’t good ideas and should work harder on building value than selling the dream.

I will admit, I didn’t raise over $10M in capital for operating companies over the past several years acting like an altar boy, but I can look every one of my investors in the eye and tell them I have been truthful, acted with integrity, and always shown them real information and real updates with progress.

Investors fall out, positions change hands, but who you are is constant. Please don’t poison the well of SV by running 90’s email con games. Thanks.

Read next: How your online rep can make or break your business