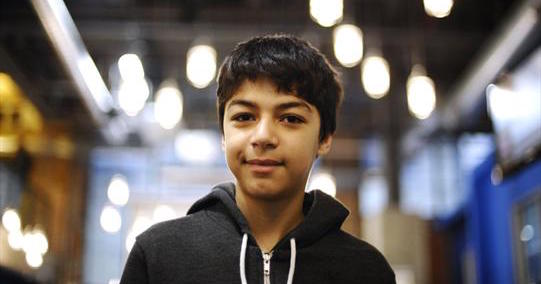 Soroush Ghodsi is 13-years-old. It shouldn’t matter. It doesn’t really matter. And yet…

I first encountered Soroush when I emailed him about an experimental anonymous Twitter bot called Whispererly, not realising that it was a side-project from such a young entrepreneur.

After working on Slik – his *real* company, which lets you search, filter and track companies based on criteria including investment round, employee count, page visits. etc. – he “reached out” (I hate that term) to me again.

Ghodsi is a preternaturally talented young man. It’s not just that he has the self-possession to send such poised and near perfect PR pitches but that when he talks, you quickly forget you are discussing the world with a kid who has just stumbled into his teenage years.

Here he is explaining the genesis of Slik:

I used to trade stocks. My uncle works in the financial district (Ed: In Waterloo, Canada where Ghodsi is based) and he told me about the Bloomberg terminal. So my little naive self tried to build something. I built a scraper that did something similar to the terminal, but obviously nowhere close because Bloomberg costs thousands of dollars and does searches in milliseconds.

I traded stocks for a while and it was fun, but in October last year I got introduced to startups. I realized there were a lot of them and the code I was working on could apply to understanding them.

But, of course, there are challenges to being a 13-year-old founder that his older rivals don’t face:

Slik is a really back-end heavy startup. It’ll take a few hundred of dollars a month for me to keep running. I used to be way more obsessed with money. I’d stash it every Christmas and birthday and save the money I earned from trading. I bought gold and was into commodities.

But those savings were burned up doing things like setting up the company email, getting a CRM, implementing sign-up forms… I could raise a ‘friends and family’ round, but if I take their money, the company wouldn’t be what I built – it would be me being subsidised.

Unsurprisingly, his parents – a professor of machine learning and a data scientist – both understand and support his efforts. He’s been at this for a comparatively long time:

I started using Scratch when I was eight. I took the money mentality I had and tried to program a game in it and put it up on a site for sale. But Scratch isn’t embeddable so that didn’t work. I quickly moved on to JavaScript and Python!

As for how the kids at school see his second life as a startup founder, he’s sanguine:

Startups are more of a niche thing that we think. Sure, they can shape the world and Google was once a startup, but it’s a small community. Most people at my school aren’t into that.

Aside from attempting to change how we think about startups and their data, Ghodsi does do ‘normal’ kid stuff. He likes playing soccer and used to play chess “too much.”

As you might expect, it’s maths that he most enjoys at school but he’s no slouch in science, English, French, art and music. Though, with the mumbled humbleness of the young teenager, he describes his ability at all of those subjects but maths as “not good, but average.”

And what about university? He’s already off and running in the world of startups, will he take the route pushed by Peter Thiel and ditch college eventually in favour of building his company? He’s not so sure:

I think university depends on how the things I do go and how the world changes, right? Going to university, at a fundamental level it changes you. It’s proven from a social perspective. Statistically, university graduates do better.

Too many people say ‘university is a stupid thing,’ but I do agree that the education system is broken. In an ideal education system, people would be learning 100% of the time. It’s still the best thing out there for most people to go to university.

While Ghodsi knows his own mind and ideas well, he’s benefitted from the fairly strong culture of entrepreneurialism in Waterloo – he considers the founder of Kik, Ted Livingston, his mentor and has taken advantage of the plethora of co-working spaces.

On the phone to one of the smartest thinkers on startups I’ve ever met – who just happens to be 13 – I had to ask him about how he sees old farts like me bloviating about how ‘millennials’ use technology, especially as he wrote such a good blog post on the topic.

He had a great point:

One thing you can do is think, I think, we’ll have to see how this plays out – people who are 8 or 9 right now, the new wave are brought into the internet world with mobile. There’ll be a huge distinction between me and them. Culturally it’ll be completely different. Their first interaction they had was with mobile.

Maybe his next mission will be to remake education itself:

The big issue in school is not what they don’t teach, it’s about how the system is built. It takes too long to change education. If you made it so it was much simpler, that would be useful.

Check out Slik and, if you’re really smart, watch closely to see what Ghodsi does next. I predict huge things.

Note: The Next Web has built a product that does a lot of things Slik is built to do. It’s called Index and you should definitely try it too.

Read next: This is the best 'I just quit my job' video ever made: The rapping receptionist!