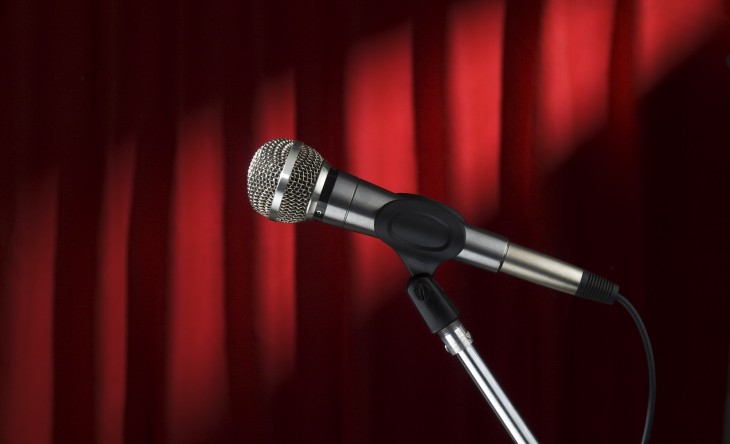 Mikael Cho is the co-founder of ooomf, a creative marketplace connecting mobile and Web projects with vetted, handpicked developers and designers from around the world. This post was originally published on the ooomf blog.

I started writing regularly a few months ago and I’m constantly trying to improve.

While watching this conversation, I realized that comedians worry about many of the same things that writers do. They obsess over things like:

Comedians have a tough job. As Jerry Seinfeld described,

“No one is more judged in civilized society than a standup comedian. Every 12 seconds you’re rated.”

If the jokes you tell aren’t connecting, your comedic career is over. Likewise, if the stories you tell don’t resonate, people won’t care about the point you’re trying to make.

Because of these similarities, there’s a lot we can learn from comedians about how to tell a good story.

It’s all about surprise

The root of a good joke is the surprise — the punchline.

A comedian may be talking about a common experience like driving to work, which you’d probably consider to be an uneventful thing. But a great comedian will finish off the story with an unexpected twist, making you laugh.

A few weeks ago, I took my first flight on Virgin Airlines. On every other flight I take, once the safety demonstration video starts, that’s usually my cue to go to sleep.

Most airline safety demonstration videos are dull- a voice slowly walks you through the steps of how to fasten your seatbelt and tells you whether your seat can or cannot be used a flotation device.

But Virgin’s safety video was different. The video is an animated sketch and includes some quirky-looking characters:

This video caught my attention because it looked different and I wanted to know what would happen next.

Then, about fifty seconds in, the video describes how to fasten a seatbelt. Instead of introducing the seatbelt the same way as every other airline safety video, Virgin introduces the standard seatbelt instructions with a twist. “For the 0.0001 percent of you who have never operated a seat belt before, it works like this…”

I could hear about half the people on the plane chuckle (including myself). From then on, I was hooked and I watched the video to the end.

The beautiful thing about surprise is it helps make things more interesting and sticky in your brain. I remembered Virgin’s safety video enough to include it in a blog post.

This ‘stickiness’ happens because your laughter triggers the release of the pleasure chemical, dopamine, which causes you to have natural, drug-like, happy feelings and helps you remember what was said.

John Medina, a biologist and author of the book Brain Rules, noted,

“The brain doesn’t pay attention to boring things. When the brain detects an emotionally-charged event, the amygdala releases dopamine into the system. Dopamine aids memory and information processing. It’s like a mental post-it note that tells your brain, remember this.”

Humor helps encode memories because it evokes an emotion, but a knee-slapping joke isn’t the only way to trigger the effects of surprise.

An iPod, a phone, and an Internet communicator

A perfect example of using the element of surprise to make something memorable is Steve Jobs’ introduction of iPhone in 2007.

Jobs started the presentation off by saying,

“This is a day I’ve been looking forward to for two and a half years. Every once in while a revolutionary product comes along that changes everything.”

Jobs then went on to mention how Apple changed the computer and music industries. But, it’s what happened next that was legendary storytelling.

Rather than immediately saying that Apple was now going to change the phone industry (which the audience would have expected), Jobs let the suspense build by saying Apple was going to announce three revolutionary products today.

“Well… today we are introducing three revolutionary products of this class. The first one is a widescreen iPod with touch controls. The second is a revolutionary mobile phone. And the third is a breakthrough Internet communications device.

So, three things: a widescreen iPod with touch controls, a revolutionary mobile phone, and a breakthrough Internet communications device.

An iPod, a phone, and an Internet communicator.

Jobs was known for his presentation showmanship, so this left the audience thinking that the surprise of the presentation was the introduction of three new products— not just iPhone.

Judging from the applause, you could tell everyone was most excited about iPhone and Jobs, of course, anticipated this. He knew his presentation was going to be all about iPhone.

After repeating that the presentation would be about the iPod, phone, and Internet communicator products, Jobs hit the punchline,

“Are you getting it?

These are not three separate devices. This is one device.

And we’re calling it iPhone.

Today… Apple is going to reinvent the phone.”

Introducing iPhone like this was not only surprising and memorable, but it helped the audience understand how powerful the iPhone was. All three of these ‘revolutionary’ products would be part of one device.

The result was magical.

Steve Jobs iPhone presentation is regarded as one of the best product demonstrations ever and shows how sharing something unexpected has a similar effect to a good punchline of a joke.

Researchers have noted that an event that is extremely memorable typically contains:

Just like a good joke, a good story can be memorable if it contains all of these elements.

Jerry Seinfeld noted that good comedy bits have a way of sticking in his head and finding a way to keep coming back. Seinfeld said there are certain jokes he thinks about daily.

This is the impact of great storytelling.

So how can you tell a story that people will remember? Here’s some things comedians use that could help you tell better stories:

1. Write about what you know

Comedian Ricky Gervais noted that you should write about what you know because people can connect.

Pick a topic that you have thought about so much that you can attack it from every angle until there’s nothing left to talk about:

“As a creator, it’s your job to make an audience as excited and fascinated about a subject as you are. Real life does that.” — Ricky Gervais

Starting with a topic that seems too grandiose or fabricated doesn’t resonate with an audience. “Making the ordinary extraordinary is better than starting with extraordinary,” says Gervais.

Comedians rarely start a show with a punchline. Instead, they first set up a joke by painting a picture so you can relate to the experience.

This is important for telling a story because the number one question you need to answer for everyone in your audience is, “Why should I care?”

The goal of this post, for instance, is to (hopefully) help you tell better stories. I try to get to this point right away in the title and first few sentences of the post.

Answer the “why should I care?” question as soon as possible.

Gervais defines a joke as the minimum number of words to get to a punchline.

Look at each sentence you write. Is there a way you could restructure or remove words to get to your point quicker? Copywriter Henneke Duistermaat shared a list of words to watch out for that usually can be cut:

After you write, look for what you can remove. If a sentence has five words, could you get it down to three? If you can remove words without the sentence losing its meaning, do it.

Scott Adams, the writer behind the Dilbert comics notes,

“Keep your writing simple, as if you were sending a witty e-mail to a friend. Be smart, but not academic. Prune words that don’t make a difference.”

After someone hears your story, what is the point you want to make sure they leave with?

Comedian Chris Rock often repeats his takeaways over and over so you remember them.

Rock did this bit about the difference between men and women. In it, he makes a point that,“women can’t go down in lifestyle.” He repeats it over and over so you don’t forget this is the one thing you are supposed to remember.

Steve Jobs did a similar thing when presenting Apple products. When Jobs introduced the iPod as “1,000 songs in your pocket,” he repeated it multiple times in the presentation.

Make it obvious what you want your audience to remember even if you have to say it more than once.

5. Callbacks: Everything must come together in the end

Comedians often use a technique called a callback to tie a routine together. A callback happens when a comedian starts off a show with a joke and specific punchline and then later, tells a different joke with the same punchline.

This helps comedians build intimacy with their audience because the audience feels like they’re part of an inside joke.

So how do you use a callback in a story? When I’m writing a conclusion to the piece, I often refer back to the opening I wrote to make sure I’ve stayed on track with the story and that I’m making it clear what the takeaway or resolution to the problem is.

“Callbacks help us feel like things are matching up. It’s reassuring. It all comes together in the end.”

After the success of the original iPod campaign, Apple used callbacks in their slogans. Look how these slogans play off the iPod 1st generation slogan:

Tie up your story by giving a resolution to every problem you introduce in your story.