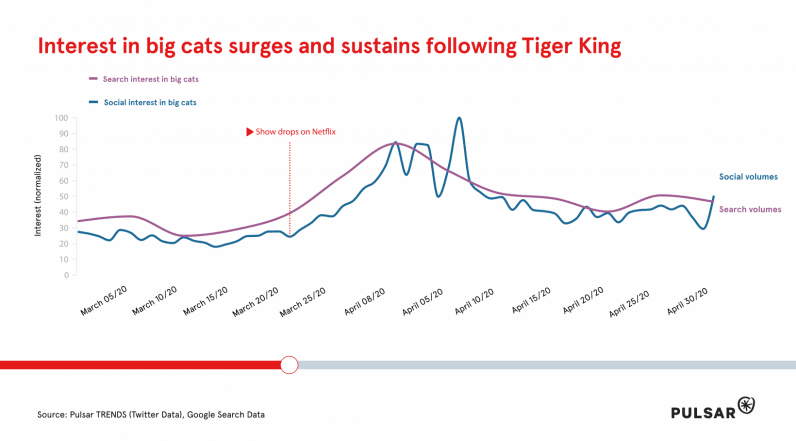 In 2019, Netflix was already a fixture in our lives. It had 167 million subscribers globally and regularly produced hit Originals like Stranger Things and Orange is the New Black. And it’s not just the shows. From sexual innuendos to its own Ben and Jerry’s flavor, the streaming platform itself was already firmly established in popular culture.

But 2020 was different. With a global pandemic keeping everyone in their homes for most of the year and a barrage of boorish politicians and natural disasters making headlines, Netflix became less a source of entertainment and more like a never-ending escape room we settled into and bought curtains for.

This unprecedented growth, along with the strange conditions that come with a global lockdown, only deepened the platform’s influence on viewers.

In fact, new data from audience intelligence platform, Pulsar, found that, if a show becomes popular on Netflix, it will create a surge in conversations around the topics the show is covering.

From big cats to chess mania, let’s take a look at a few of the most popular shows this year and how each propelled a new, often niche, topic into mainstream culture:

If you think Facebook wasn’t having enough troubles on its own, The Social Dilemma landed on Netflix like a bomb leaving the company reeling from user drop-offs across its platforms.

When the docu-drama dropped on Netflix in September, it sparked a surge in search interest around deleting social media and (ironically enough) anti-social media discussions… on social media.

The docu-drama featured interviews with several former employees of social media giants like Facebook and Twitter who were tasked with developing new ways of keeping users scrolling.

But although, after watching The Social Dilemma, a mass of viewers vowed to delete their accounts and never look back, another camp of viewers criticized the show for overdramatizing the situation and placing the blame solely on companies. Still, others argued that it offered nothing new, with some of the tactics social media companies use already being common knowledge.

Whatever side you’re on, there’s no doubt about one thing. The Netflix show certainly kicked up the debate many have been having with themselves for the past few years: to delete or not to delete social media.

Love on the Spectrum

While shooting his 2017 docuseries Employable Me, which centered on the discrimination people with physical disabilities and neurological conditions face in finding employment; Australian filmmaker Cian O’Clery realized that many of the autistic people he interviewed had one common problem: dating.

Many wanted to experience that connection with someone but were having trouble navigating the dating world. As he told The Wrap in an interview, “People on the spectrum want love just like everybody else does.”

With the few representations of people with autism in the media generally being based on stereotypes and narrow views of what having autism actually means, with Love on the Spectrum O’Clery wanted to, not only help people find love, but also push forward the conversation about neurodiversity.

And, as we can see from Pulsar’s data, the show’s appearance on Netflix certainly helped O’Clery reach this goal.

When the show first premiered in November 2019 on Australian TV it helped bring a gradual uptick in social conversations and searches around neurodiversity. But, after dropping on Netflix in July 2020, these conversations reached a much larger audience.

Differing from other documentaries about autism, perhaps what really helped to frame the conversation around neurodiversity was the fact that it centers on a struggle which we can all relate to: the nervousness of going on a first date.

As the show’s description puts it: “Finding love can be hard for anyone. For young adults on the autism spectrum, exploring the unpredictable world of dating is even more complicated.”

In these strange times, a man with a love for mullets, sequins, and tigers was apparently what most people needed. When the show dropped on Netflix in March (during the height of the first lockdown) it broke records as the most-watched show on the platform for the longest period of time.

But, the question many critics have asked is, did the docu-drama actually accomplish what it set out to achieve?

With the show, producers Eric Goode and Rebecca Chaiklin aimed to put a spotlight on the vast underground illegal breeding and trade in big cats. According to the World Wildlife Fund, there are more captive tigers living in the US than living in the wild globally. And only 6% of these tigers live in zoos and other accredited facilities, meaning that the rest “are privately owned and living in people’s backyards, roadside attractions, and private breeding facilities.”

However, some question whether the lead character, one Joe Exotic, and his realm of characters didn’t detract from the actual ambitions of the show.

Whatever your views are, Pulsar’s data does indeed show that search and social interest in big cats surged during the first month the show aired and (while dropping slightly) continued to sustain higher than average levels of interest.

As apparently one of the few people in the world who actually hasn’t seen the series, I can’t speak to Tiger King’s sudden rise to fame. But in the search for logical explanations, I’m partial to Sophie Gilbert, writer for The Atlantic’s view on the phenomenon:

“America right now, in the midst of a pandemic, is reliant on collective behavior, adhering to rules, and taking sensible precautions to avoid danger. Tiger King is the TV equivalent of licking the subway pole.”

There was perhaps only one man with the moves (and perhaps the ego) to capture viewers’ attention away from Tiger King, Michael Jordan.

When The Last Dance appeared in April, it quickly generated more views than Tiger King becoming the most in-demand documentary in the world by May, according to Bloomberg.

The series follows Jordan’s career, his most memorable moments on the court, and goes deeper into his penchant for bullying, rivalries with players, gambling addiction, and other personal problems that came with his drive for fame.

For a player that hasn’t taken to the courts since the 90s, search queries and social media conversation around the show exploded, particularly on Twitter where the last episode alone racked up one million tweets. In fact, 20 of the 30 trending topics at the time were related to the documentary.

And it wasn’t just the show, everything Jordan, from his rivalry with LeBron, to the top sneakers of the era, to an array of MJ memes were being shared.

Jordan became the top person mentioned on Twitter and went on to dominate searches and conversations across social platforms and media:

Interestingly, what the Pulsar team found was that the series didn’t just capture basketball fans. It was actually able to transcend global and sports borders, as well as generational boundaries, bringing MJ’s panache to new audiences.

According to the data, before the show dropped, conversations about Jordan mainly came from sports fans and journalists based in the US. After the show, interest in the player grew globally, particularly amongst soccer fans in Spain and Latin America. And these weren’t just fans from the 90s reliving past nostalgia, around 50% of the audience was younger than 24.

And just why would young soccer fans become so taken with the story of a retired basketball legend?

It’s hard to say what exactly brought on this MJ mania. It could, as many have guessed, be down to the simple need for some sports action while games were indefinitely canceled. But I think this would be too simplistic. What Netflix and its partner ESPN really got right here was the storytelling aspect of the series.

Rather than being about one of the greatest basketball players who ever lived, it was about the competition, the drive, the controversy, and the drama that come with rising to the top of your game. Rather than painting Jordan as a god, it portrayed him as a very real person, flaws and all.

Based on a novel of the same title, the show follows an orphaned mathematics prodigy as she ascends to the top level of a male-dominated pastime: chess.

According to Netflix’s count, the show received 62 million views worldwide within the first month and reached it’s top ten list in 92 countries.

The interesting thing is that the show didn’t just entertain viewers, it also set off a new craze for the board game, with chess set sales skyrocketing.

Me learning how to play chess after watching the queens gambit pic.twitter.com/5tt2nwU2yq

This was reflected in the data the Pulsar team surfaced, with audience interest in chess growing steadily on both search and social media since the show aired.

Digging deeper into the data, we can see that, not only did interest in chess increase, it also expanded into larger communities with the audience (post launch) being made up of users with varied interests from left-wing politics to activist celebrities to Japanese-rooted, self-referential gaming culture.

Like the success of The Last Dance, The Queen’s Gambit swept across newer gaming communities. However, interestingly enough, hardcore chess fans seemed to “isolate” themselves – as you can see, their conversation became more insular and segregated from the broader social conversation around chess propelled by the show.

As with The Last Dance, The Queen’s Gambit could have done alright by catering to an already established global chess audience. But, perhaps the root of its success comes from the fact that the show wasn’t necessarily about the game. Instead, it was about the player and the struggles she faced to get to the top and the loneliness that can sometimes come with a life set on competition and fame.

While these shows are all very different in tone and subject, what we do see across all of them is the growing hand Netflix has played in shaping popular culture this year. Whether or not that will change when our Saturday night Netflix binge is again replaced by actual social interactions is anyone’s guess. For now, all eyes continue to be watching for the platform’s next big hit.