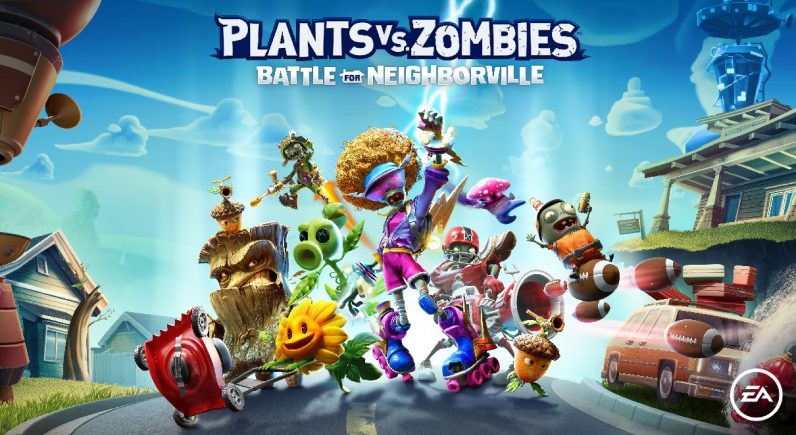 A tiny speck of light reflects off the enemy’s scope and flashes in my peripheral. I’ve got a few milliseconds to react before a projectile rips through my on-screen avatar’s head. Exposed and unable to find cover, I try unsuccessfully to distract the sniper with hip-fire. I make a mental note of the marksman’s position and decide to switch to a different class when I respawn. I’m not going to shoot the enemy soldier, that wouldn’t be satisfying enough. I’m going to eat them. I’m going to burrow under the ground, explode from the dirt like a muddy phoenix, and swallow them whole.

Try doing that in the latest installment of the Call of Duty franchise.

Obviously, I’m talking about my newest gaming obsession: Plants vs Zombies: The Battle for Neighborville. It’s an open-world multiplayer shooter developed by PopCap Vancouver and published by EA. If you’ve played the previous entries in the Garden Warfare franchise you (somewhat) know what to expect. It’s a fun-filled, cute game that plays out in the form of a war between plants and zombies.

Players choose between 20 different characters spanning the eponymous sides and participate in numerous game modes that, essentially, boil down to shooting, exploding, punching, and, yes, eating one another. Though, you might be surprised to know that it’s not the zombies doing the eating (after all, they crave human brains not nutritious greens).

The closest titles I’ve played to The Battle for Neighborville are the Call of Duty games. Sure, one’s a hardcore look at the atrocities of war and the other one has you doing battle against superhero zombies and kung-fu mushrooms, but don’t let that throw you off. These are both highly-polished games. It’s just that the goofy one (PvZ) is, well, better than the one that topped $600 million in its first three days of sales (Modern Warfare, of course). And for one reason alone: innovation.

In fairness, Modern Warfare is a soft reboot. I cut my online-FPS-shooter-teeth on Call of Duty 4: Modern Warfare more than a decade ago and it remains one of my favorite games of all time. The new version is a great game, in fact I’d go so far as to call it a triumph. It’s both familiar and new, and it took me about five minutes to get into the swing of things and fall right back into my old gaming patterns.

But it’s no Battle for Neighborville. Where Call of Duty has continued to play it safe in the decade since the original Modern Warfare was released by tweaking and peaking its multiplayer gameplay in increments typically reserved for annual-release sports games, Neighborville has managed to blend open-world gameplay with a multiplayer shooter in a way that makes Modern Warfare look dated.

In Battle for Neighborville you’ll handle almost all of your business – character upgrades and unlocks, purchases, choosing game sides, and launching areas – all within the confines of your base. When you’re ready for action you can either catapult straight into a practice area, or transition to a particular game mode for action.

Modern Warfare, on the other hand, still feels like it’s equal parts “Football Manager” and instanced shooter. That’s not necessarily a bad thing, sometimes you just want to jump into a few matches real quick and then veg out to the menu while you grab a snack. But it rips the immersion away. I honestly don’t care which faction I’m fighting for or who I’m fighting against in Modern Warfare. Am I a British SAS soldier this round? Doesn’t matter. Will I be a Russian baddie next game? Who cares?

In Battle for Neighborville, all of this matters. The open-world approach brings a tinge of roleplay – you wander around and talk to non-player characters in your base – that makes the story come to life and the world feel cohesive. You live in Neighborville and it’s up to you to fight for the side you so choose.

In order to glean this sort of emotional attachment to the game’s characters, set pieces, and mechanics in Modern Warfare you’ll need to experience the single player campaign. Don’t get me wrong, it’s worth doing so. But if you’re anything like me, the campaign is an afterthought that you’ll get into after you’ve prestiged once or twice in the multiplayer game. Ain’t nobody got time to play the story mode, I’m trying to unlock the AK-47 for team deathmatch.

I’m not going to tell you that Battle for Neighborville is a Call of Duty killer, because it isn’t. But it takes some of the best features of the CoD franchise and blends them into a near-seamless open world that’s brilliant. I care about the plants and zombies I embody when I play because they’re cute, quirky, and full of character. This keeps my head in the game instead of setting me up to rage out against the litany of no-scoping, assisted-aiming campers in Call of Duty. It’s really hard to get pissed off at a sunflower for spawn-killing you, look at how adorable it is!

For my money, PvZ is the more fun game. I can’t recommend it enough to everyone but the most competitive gamers. Modern Warfare has the advantage when it comes to the “big feels” that you get from dominating the competition (Battle for Neighborville doesn’t have kill streaks and it’s much less dependent on twitch skills), but PvZ is the game I ‘chillax’ with when the 15th death in a row during a Modern Warfare match via corner-camper sends me into a childish tizzy.

I recommend them together, but if you’re only going to play one: Get the one that lets you eat the whole damn sniper, gun and all. Revenge is a dish best served raw.

Read next: Microsoft's killing the Cortana app in most markets next year