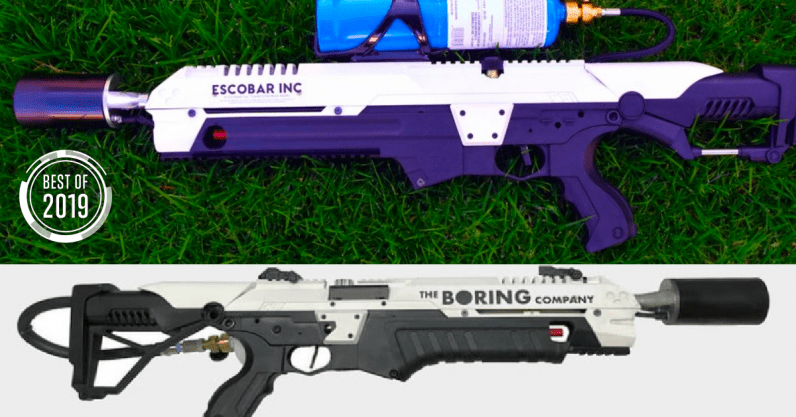 Elon Musk can add the Escobar family to his list of detractors after notorious kingpin Pablo’s older brother, Roberto Escobar, today accused the billionaire tech CEO of stealing the design for The Boring Company’s Not A Flamethrower.

According to TMZ, an engineer associated with Musk visited the Escobar’s business compound somewhere around the summer of 2017. During that time Escobar allegedly discussed developing a “toy flamethrower” with the engineer. Apparently no further discussions were held between the two camps, which left Escobar shocked when The Boring Company announced it was developing its own flamethrower in January of 2018. Also per the report: Escobar and company are considering their legal options.

We’re not sure what those options could possibly be. It’s a safe bet Musk and The Boring Company did their due diligence when they decided to manufacture and sell a consumer-grade flamethrower. The New York state senate just passed a bill banning it, one imagines the state’s lower courts could have handled the issue if The Boring Company’s paperwork wasn’t properly in order.

It bears mention that Musk’s flamethrower, which is actually called “Not A Flamethrower,” sold out of its limited 20,000 unit production run (at $500 a piece) a while back. You can potentially get one on eBay for about twice its retail cost, but otherwise you’re out of luck.

Unless you buy an incredibly similar-looking flamethrower from Escobar Inc., of course. As you may have guessed, Escobar is hawking his own device. He also has some advice on its use:

I want the people to be able to burn money, like me and Pablo used to do. I burned probably a couple of billion dollars over the years. Literally burning the money. For many reasons. The Escobar Inc Flamethrower will sell out very fast.

And, best of all, the Escobar flamethrower just went on sale for $250, because people who burn money also appreciate bargains. Right?

Musk’s responded to the accusations with his usual aloofness:

We reached out to Escobar Inc. to see if it had anything to say back to Musk. And we were not disappointed. The company’s CEO, Olof Gustafsson, had some strong thoughts on Elon’s tweet. He told TNW:

Elon’s tweet shows that he is guilty. It is very important to understand that right now, one of the richest people currently in the world has acknowledged his wrongdoing by posting that “it is not a flamethrower, Mr. Escobar”, this is his way of trying to lower his real liability. He is basically admitting to stealing! We will settle this, I am sure. Elon knows where to find us.

And Escobar, the company’s founder, had even harsher words for Musk:

Elon we both know you stole from me, I am OK to settle this right now for $100 million. Tesla shares is OK or cash. I will win in court, and you will lose more than $100 million. Maybe I will make myself new Tesla CEO with the courts? Remember, in the 1980’s you were a small baby boy while I was running the world. Now you made a few billion, even 20 billion, that is what I made in 2 good weeks my friend. Let’s settle this like gentleman. Send me the Tesla Shares to Escobar Inc.

We’ve reached out to The Boring Company and Tesla for comment and will update this article if we receive a response.

Read next: RIP Backgammon -- Microsoft to shutter its Internet Games service by next year