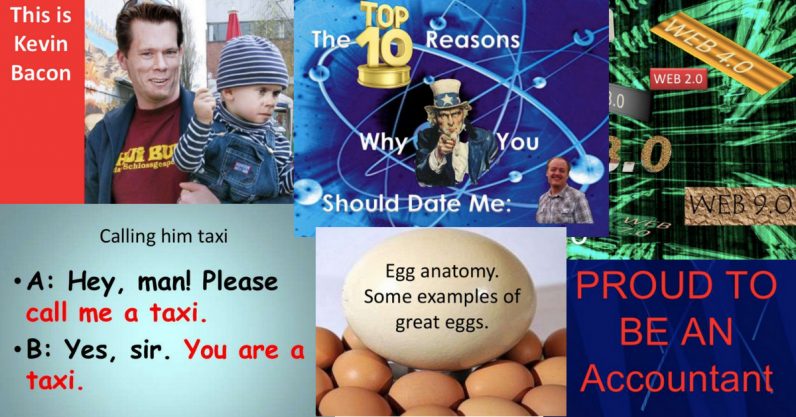 Twitter is incredible (and horrendous) for so many reasons.

This week, we happened upon the Twitter account, SlideShare Gems. It’s exactly as advertised — a collection of slides pulled from random slideshows, and tweeted without context.

And let’s just say we were inspired. Nay, transformed.

The account is run by internet artist, Neil Cicierega. He has created several other social media projects, across platforms such as Tumblr, Facebook, and YouTube. He was also responsible for the famous “Potter Puppet Pals” back in 2003.

His work often hinges on vintage internet ephemera, such as Windows 95 Tips, or collections of our weirder internet moments and private searches, such as Dick Health.

The SlideShare Gems Twitter account blew our minds wide open, and has possibly altered TNW’s aesthetic forever. We try our best to be as off-putting as possible with our images — example A, B, and C – but SlideShare opened up a whole new world of possibilities.

In fact, I believe everyone can learn a thing or two from SlideShare Gems. So here are three new rules of aesthetic we took away.

Always be as literal as possible

When giving a presentation, you never know what kind of crowd you might be dealing with. They could be dumb — really dumb.

In case you aren’t sure of the audience’s intelligence level, it’s best to just assume they are a group of idiots who couldn’t find their way out of a paper bag. You’re going to want to be as literal as possible with your message.

This is also a great way to not offend anybody. Don’t share any opinions, insights, or analyses ever. This is especially important in any kind of professional setting.

Listen — in this world, there are winners, and there are losers. The winners are people who go out into cyberspace and take the content they want without any consideration of ownership or intellectual property law. I mean, has colonialism taught us nothing?

It’s better to ask for forgiveness than permission. Remember that. Memorize it. Get it tattooed on your lower back.

Anyhoo, here are some blatant example of copyright infringement that legally we cannot endorse… wink.

Star Wars has made a shit ton of money. I feel no guilt.

If you’re nervous, just slightly alter the image. Or better yet, reduce the quality until its as grainy as your ass after a day at the beach. They’ll never catch you.

That’s it, butter The Simpsons’ legal team up. It’s not stealing if it’s done as an homage.

And no one’s probably reading your shitty presentation anyway.

Don’t be afraid to experiment… with threats

We all know the secret to good copy is a looming sense of the threat of death. If you’re not reminded of your mortality while reading something, it’s not worth your time, right?

Here are a few great examples of threatening posts that got it right.

There’s so much to unpack here.

The angle of the gun. The devilish glint in the child’s psychopathic eyes. The use of language — never before have I been more afraid of toast.

And the formatting? I mean, look at how the white text softly picks up the iridescent light streaming in from the left. Reminds you a bit of heaven, doesn’t it?

This one is interesting. Vague, confusing… but full of triggering imagery.

I’m no semiotician, but I’m getting the strong feeling from this slide that Hillary Clinton has something to do with aliens, and is possibly one herself.

What is grandpa’s camp? What takes place there? And why did this need a slideshow?

Thank you, Neil. Not only have you saved us from a future of cold conference rooms, lukewarm coffee, and bland presentations, you’ve also inadvertently rerouted our entire aesthetic.

We will take it forward with us whenever we make a PowerPoint presentation in the future — in fact, when we make anything.

Needless to say our lives are changed.