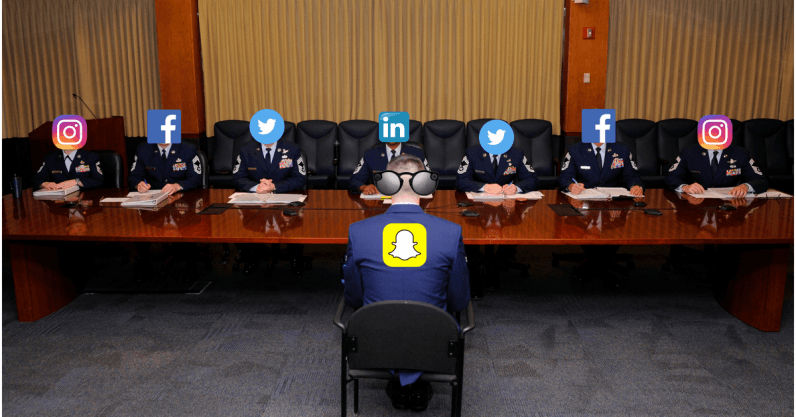 Snap’s second-gen line of its Spectacles – which were launched in April of this year – are now on Amazon. Joy!

The decision to do another iteration of the Spectacles is strange, especially as the product’s first run didn’t do that well, losing the company around $40 million.

Despite this, I don’t actually think the Spectacles are a particularly bad idea. A pair of glasses that let you quickly capture and share what’s going on fits well with Snapchat’s approach to social media.

And from there, I couldn’t help but wonder… If other social media brands decided to release their own hardware, what would they do? And, if I presented them to the world for free, would these companies support my lavish lifestyle?

There’s only one way to find out…

As a platform, you can sum up Twitter like this: Why keep your thoughts to yourself when you can manufacture an opinion about everything?

With the Tweeterfone™, this attitude doesn’t need to be kept online. Now, you can take your combativeness to the streets and feel comfort in knowing you’re louder than anyone else in the vicinity.

Did the staff forget to put olives on your pizza? Chastise them with the Tweeterfone™.

You’re trying to get down to the Supreme store to pick up that latest fanny pack and a woman with a pushchair gets in your way? Use the Tweeterfone™ to break down in great detail why wombs are cancer and that her choice of having a child shouldn’t impact you.

Parents are asking you to get a job? Repeat over and over again how you’re too much of a creative talent and free thinker to ever be tied down to something as mundane as a 9-5 and a pay cheque.

Also, to give the full Twitter experience, the Tweeterphone™ will randomly shout out racial or sexual slurs. This feature cannot be turned off.

It’s been getting harder and harder to stand-out on Instagram. A year or two ago, a couple of nice snaps a week could get you some decent likes, but now? How can you compete with people with who have trust funds, banking jobs, or live in some pretty place?

I’ll tell you how: The Gr(e)am Screen™, the Instagram-branded green screen of your dreams.

Okay, the name needs some work (the combination of ‘gram’ and ‘green’ didn’t go too well), but the concept is solid. Rather than having to actually go to places to scratch that deep yearning inside you to show people how good your life is, just digitally add it with the green screen.

Someone went to three continents in a day? You’ll make it nine. Don’t listen to the haters, only you can decide how many continents exist now you have the Gr(e)am Screen™. Reality can suck it.

It wants you to hear about an event coming in three weeks time. It wants to tell you that you’ve just clicked “accept” on a friendship request by giving you a fake messenger alert. It wants you to know when someone you haven’t spoken with in eight years looks at a picture of a second hand Ford Focus. It’s doing this for you. Because Facebook is your life now.

This is why the company has to release The Face Buzz Box™.

Much like Facebook was a literal book of faces, The Face Buzz Box™ is a box that slots onto your face and buzzes. Whenever the platform sends you a notification, you get a sweet little vibration sent into your skull, along with a healthy shot of dopamine.

Why would you agree to get this box of electronics and wires and metal strapped to you skull? Easy – because Facebook will install it free of charge.

It also tracks your location and mood at all times. But it feels good and is… free.

I’ve never met anyone that enjoys anything about LinkedIn and, even if you are one of those rare people, you’re probably lying to yourself. Still, there had to be a positive product that could be relevant to LinkedIn. So, it got me thinking: what’s the overriding emotion I feel when I use the social network?

Ah yes, boredom. Sheer, unadulterated boredom. A boredom so deep and cavernous that if you shouted into the space, you would become disinterested before the dull echo even reached you. In other words, it’s a great sleep companion.

This is why the SleepedIn System™ is perfect. The product will come in two parts: a mattress and some goggles. The former will have the patented LinkedIn aroma of unrelenting bullshit, while the latter will flash all the updates from your network in front of your eyes to lull you into a troubled, dark sleep*.

And that’s it! I hope you finish this article with a picture in your mind of how great the world would be if other social media companies acted like Snapchat and released their own products. What a magical time that’d be.

Until they start making the things we all know they should, you can get Snap’s Spectacles here.

*any nightmares experienced with the SleepedIn System™ are purely coincidental.

Read next: 4 practical tips to verify if your customers are who they say they are