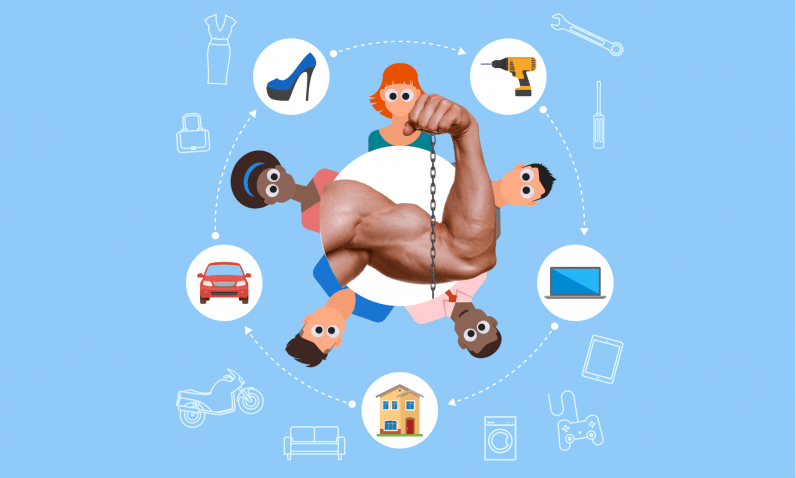 These days, it seems that consumers are willing to share just about everything in an effort to save a bit of their own money or to earn something extra. From renting a bike to get around in urban areas to monetizing your car as a Lyft driver, it seems like almost everyone has gotten involved in the sharing economy in one way or another.

But the sharing economy isn’t without its limitations, especially when it comes to navigating an increasingly global marketplace. Most sharing companies require cash and credit card payments to process transactions, and when going international, such purchases will subsequently be subjected to a plethora of transaction fees.

Blockchain technology has already made waves globally thanks to its ability to facilitate international transactions without those additional expenses. Now, ShareRing seeks to bring blockchain and the sharing economy together by creating a one-of-a-kind platform that could revolutionize the way we share goods and services.

ShareRing is the brainchild of Australian founders Tim Bos, Neville Christie, Peter David, and Rohan Le Page, who had the idea of creating a digital marketplace for the sharing economy.

Three of the four founders had previously worked together as part of another sharing economy startup, Keaz, which functioned as a car-sharing service for global companies.

Today, that company has established over 300 locations across the globe, but the team felt that there was more they could accomplish within the sharing economy to reduce waste and improve the customer experience. The ultimate goal was to create a marketplace that was as convenient and user-friendly as e-commerce giants like Amazon.

The breakthrough came with surging interest in the blockchain. The ability to use smart contracts eliminated many of the team’s initial concerns about creating a sharing economy marketplace, such as how to facilitate secure transactions or reduce the fees associated with international currency transfers.

With the right technology in place, the ShareRing team was ready to begin work on what had been their goal all along — creating a single space where users could go to borrow, share or rent products and services.

While blockchain and cryptocurrency may seem complicated to the average consumer, the goal behind ShareRing’s platform is to make the use of such technology easy and stress-free for consumers and businesses alike. It doesn’t matter what type of product or service a user wants to share — sharing economy businesses can facilitate everything from petsitting to parking in someone else’s driveway.

As with other blockchain startups, ShareRing uses its own unique token (SharePay) to facilitate payments. This benefits both customers and sharing economy businesses by helping them bypass international transaction fees while also receiving instant confirmation of their transactions.

With secure storage of all data in the blockchain as well as seamless identity verification, there also isn’t a risk of having one’s tokens used without their knowledge.

Creating an easy-to-use platform is a central goal of ShareRing’s team. In this sense, ShareRing seeks to be like Amazon and other e-commerce giants, giving users the ability to find whatever they’re looking for in an aesthetically pleasing layout.

By partnering with a wide range of sharing economy companies both big and small, this platform makes it far easier to connect users to the businesses whose services they need.

The ShareRing app is how the company seeks to accomplish this goal. Using GPS technology, the app will highlight which sharing economy services are nearby, allowing users to quickly find a business that meets their needs.

ShareRing partners will have the freedom to add their own functionalities within the app, creating customizable experiences that help them better appeal to potential customers. Despite being based on blockchain technology, this app will make the user experience as simple as a traditional online transaction.

The future of the sharing economy

ShareRing ultimately seeks to create a win-win situation for consumers and sharing economy companies alike. Everyday customers will be able to use their native currency to buy tokens and complete purchases, even while traveling abroad. Sharing economy companies will gain increased visibility and profitability by having their services offered through an Amazon-style platform.

Creating a “one-stop shop” for the sharing economy is an ambitious project — but it is one the team at ShareRing is clearly equipped to handle. Indeed, development has proceeded quickly for ShareRing, which now has staff in Australia, Hong Kong, Vietnam and other countries. The company currently holds partnerships with Keaz, Byd, Yoogo, and DJI, and will announce more partners in the coming weeks.

An initial investing round raised AU$3.8 million in preparation for an upcoming token sale, which aims to raise over AU$60 million.

By creating a platform that helps people find and use sharing services no matter where in the world they might be, ShareRing is poised to bring blockchain to the masses and fuel the growth of the global sharing economy like never before.