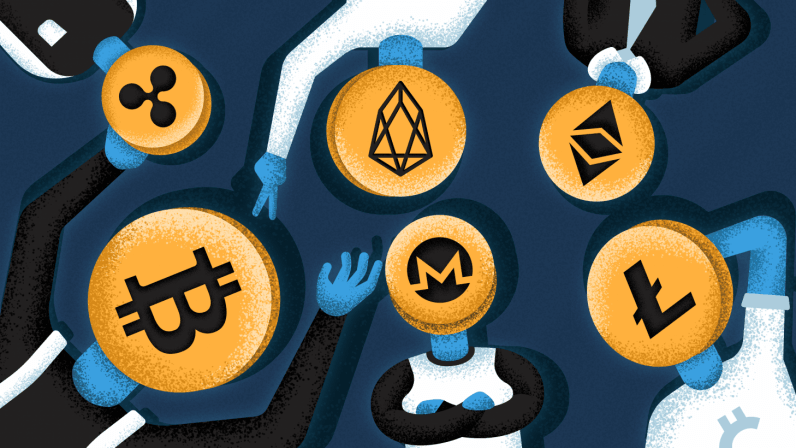 Remember the days when things were simple? When it was just Bitcoin and everyone thought blockchains were just something toddlers played with?

We also have Potcoin — which has a market cap of $60 million and sent Dennis Rodman to North Korea, the Useless Ethereum Token — which is, as you’d expect, quite useless, and Unobtanium — which aims to be the rarest token of all time by, well, being unobtainable.

While these coins probably aren’t included in your portfolio, it’s not always easy to tell which tokens are right for you — even with the more conventional cryptocurrencies.

In fact, what does ‘right for you’ even mean? Show me your crypto wallet and I’ll tell you who you are.

If you’re the better-safe-than-sorry type, Bitcoin (BTC) is for you. Bitcoin has been around since 2009 when the pseudonymous person/group of persons named Satoshi Nakamoto announced the creation of a new “peer-to-peer electronic cash system.” That day, the first decentralized cryptocurrency was born.

Bitcoin was meant to create the first decentralized worldwide payment system. However, it has yet to reach that goal because right now, it’s still too slow and too expensive. So instead, it has become digital gold.

Why digital gold? Well, while Bitcoin is probably no longer the most innovative or useful cryptocurrency, it’s still the most valuable. At the time of writing, Bitcoin is worth $9,856 with a market cap of over $167 billion. It’s also likely one of the safest coins to invest in (although don’t take my word for it). So if you’re a vanilla, safe, and secure kind of guy or gal, Bitcoin is probably right for you.

Last year, Bitcoin Cash (BCH) was created by ‘forking’ the Bitcoin blockchain ledger — meaning the underlying technology was copied but with upgraded consensus rules that allow it to grow and scale. While Bitcoin remains the Goliath, the young upstart Bitcoin Cash has been able to gain some ground. This is mainly because compared to Bitcoin, Bitcoin Cash is better able to act as “digital cash,” as it can be used for small payments (micropayments) to certain merchants without breaking the bank.

Bitcoin Cash uses larger block sizes and as a result, transaction fees are lower and each transaction speed is higher — making it less expensive and faster than Bitcoin. So Bitcoin Cash is perfect for the shopaholic who isn’t just holding cryptocurrency as a store of value but hopes to actually use it as a currency without getting drowned in fees.

Hate The Man? Want to replace him, and all of the middlemen, and rent takers with a more decentralized world? Then fill your wallet with Ethereum and the blockchain with CryptoKitties! Ethereum (ETH) is a crypto-utopian’s digital currency, complete with idealist founder Vitalik Buterin.

Ethereum was the first cryptocurrency that wasn’t meant to just be a currency — call it Crypto 2.0. When Vitalik Buterin released his whitepaper in 2013, it described a blockchain that was “Turing complete,” meaning it could be used as a programming language for developers to build and publish distributed applications. The goal? According to the Ethereum Foundation, “[to] build a more globally accessible, freer, and more trustworthy internet.”

In the three short years since it was created, Ethereum has already evolved into an ecosystem of developers, entrepreneurs, and thinkers experimenting with the possibilities of a decentralized network for computing power.

Today, Ethereum is both the second largest cryptocurrency and is being used to create a generation of decentralized applications (DAPPS) that do everything from enabling people to buy kitties online to providing economic identities to the unbanked.

Maybe you have no interest in sticking it to The Man, because, well, you are The Man.

Then Ripple (XRP) is for you! Cryptocurrencies have gone corporate with Ripple, which is the cryptocurrency for financial institutions. Launched in 2012 to facilitate global financial transactions, companies like Bank of America, UBS, and Santander have all utilized the Ripple platform.

Financial institutions like Ripple both because it isn’t mined by users — instead the company (Ripple) has centralized control — and because transactions occur much quicker with Ripple than cryptocurrencies like Bitcoin. So if you feel safer knowing that a single company is managing the future of your investment versus a community of crypto-miners, then Ripple might be right for you.

Some people spend their whole lives struggling to come first, while others have no problem being the runner-up. Litecoin (LTC) founder Charlie Lee is one of those people. When Litecoin was developed in 2011, Lee stated it should be considered the “silver” to Bitcoin’s “gold.”

Litecoin was actually one of the first forks of Bitcoin. However, it was meant to be complementary to Bitcoin, not a replacement. By offering a less valuable and more numerous currency that could be transacted faster and cheaper, Lee and his team created a coin that Bitcoin Hodlrs could use for small transactions. So if you’re a fan of the underdog, why not skip gold and go for silver?

The Hipster (Who Thinks Ethereum Is So 2017)

EOS has been dramatically dubbed the Ethereum killer. This is because like ETH, EOS is both a currency and meant to be a decentralized (“Turing complete”) operating system for decentralized applications (DAPPS) – however, they plan to do it better.

What does “do it better” mean? Firstly, EOS plans to completely remove transaction fees and claims to have the ability to conduct millions of transactions per second. This would solve many of the problems of current DAPPS by enabling support for millions of users, free usage, and low latency.

So if you’re over Ethereum for any number of reasons — be it all of the unfinished projects, the difficulty of building on the quicksands of a protocol in development, because the API sucks, or simply because you are just too cool for school — then EOS is for you.

If you don’t like Big Brother watching you, then Monero is probably the coin for you. Monero claims to be one of the most privacy-centric and anonymous cryptocurrencies. The platform’s architecture is based on the CryptoNote protocol – which uses Ring signature, a more sophisticated system to verify transfers, using several public keys for verification.

So if you’re going off-grid, trying to become a deep-cover spy, or just really don’t want people seeing your texts, then Monero is the cryptocurrency for you.

Didn’t find a wonderfully specific coin to match your personality? Don’t worry, there are over 1000 other coins to pick from. Just remember to keep them all safe!

Would you like to buy your first Bitcoin easily or make fast, cheap payments with Bitcoin Cash? In the BTC.com wallet, you can buy, store and transact with your coins securely. BTC.com is one of the most popular cryptocurrency wallets, supported by the largest mining pool in the world. Get your free digital wallet by visiting wallet.btc.com or downloading the mobile wallet for iOS and Android. Don’t miss the crypto revolution.