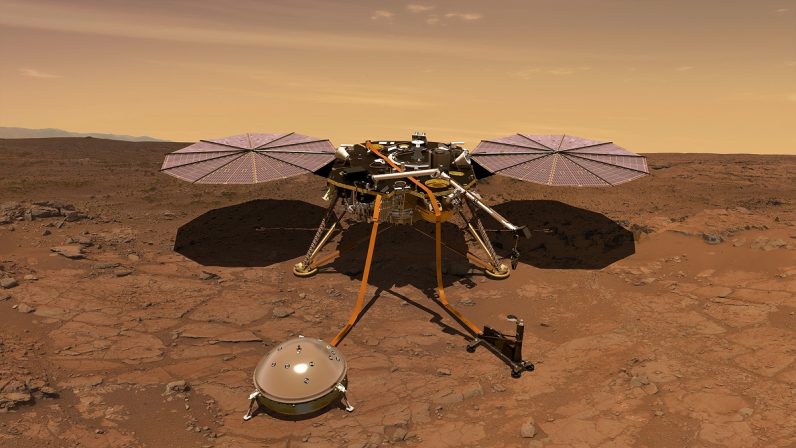 Straight outta’ Mars, NASA released a mixtape on SoundCloud earlier this week featuring tracks recorded on the red planet by its InSight rover. If you’ve never gotten down to a funky Martian beat (Lil Wayne and Outkast don’t count) you don’t know what you’re missing.

According to NASA, the recordings were collected by a seismometer designed to capture subsurface vibrations:

The spacecraft’s exquisitely sensitive seismometer, called the Seismic Experiment for Interior Structure (SEIS), can pick up vibrations as subtle as a breeze. The instrument was provided by the French space agency, Centre National d’Études Spatiales (CNES), and its partners.

SEIS was designed to listen for marsquakes. Scientists want to study how the seismic waves of these quakes move through the planet’s interior, revealing the deep inner structure of Mars for the first time.

In the above video NASA says the sounds you’re hearing are caused by marsquakes, wind, the movement of the rover’s ‘arm,’ and friction within the seismometer – just science noises, nothing spooky.

That’s not to say they aren’t amazing. What you’re hearing is, essentially, the sounds of an alien planet as it hurtles around our Sun. It’s the music of space. Check out this track (you’ll want to wear headphones):

“Dinks and Donks Sample” is an unfortunate name for, to the best of my knowledge, the first beat ever produced on Mars. NASA might call it a bunch of random sounds caused by friction, but there’s a thread of rhythm that weaves its way through two-minute track. If it weren’t for the sporadic tempo changes, I’d be tempted to remix it with some 808 drums.

The three tracks that follow the “Dinks and Donks” space groove are captures of actual marsquakes. They’re incredible soundscapes that sent more than a few chills down my spine. If you’ve got some quality headphones, throw them on and turn these up. After basking in the sounds of Mars I’m not sure I can go back to regular, old Earth meditation music.

Do you agree with Már’s musings on Mars‘ ASMR? Let us know in the comments.

Read next: Elon Musk’s plan for sending people to Mars is probably a suicide mission

Read next: Hands-on: The Surface Laptop 3 is the Surface for people who don't want a Surface