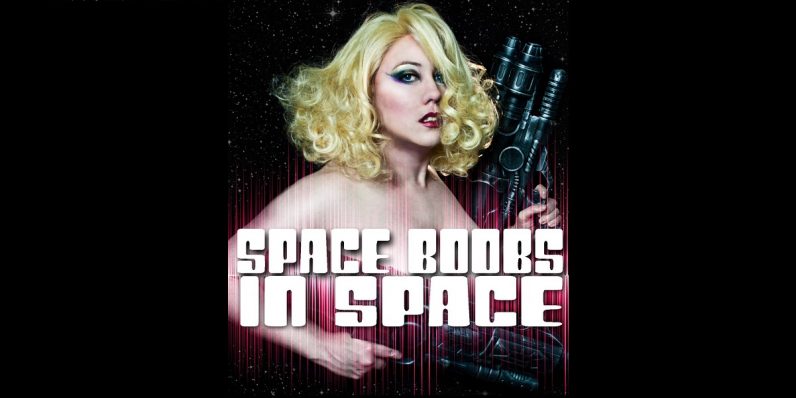 Prime Video doesn’t have a show like Netflix’s Jessica Jones. Instead, it has Space Boobs In Space. Where the former’s about a fictional female crime fighter, the other is a low budget piece of body-positive feminism that deserves to be taken just as seriously. Not all heroes wear capes or leather jackets; some wear just enough to cover their nipples.

Space Boobs In Space is a film by underground studio Gonzoriffic. According to IMDB it was shot on an estimated budget of about $1,000 using smartphones, DSLR cameras, A VHS camcorder, and whatever else director Andrew Shearer and his crew could get their hands on. It’s not going to win any Oscars, and if you just looked at the artwork and read the description you’d probably get the wrong idea.

If you’re expecting exploitation cinema, or some grade-B schlockfest that was put together just to titillate the male libido: you’re wrong. It is sexy, and it’s plot is unapologetically all about boobs, but there’s no exposed breasts or helpless vixens in need of a strong man to save them.

You should skip all of Gonzoriffic’s work if you’re just looking for T&A. The women in these films are self-assured and it’s obvious they’re shooting the movie they want to film, not the one they think some primary demographic will appreciate.

And that’s a problem for a lot of people who see the artwork and think they’re about to have their hardons catered to. One reviewer on IMDB said:

This movie is utterly painful to watch. I watched with a friend and was thoroughly disappointed and it takes ALOT for me to be disappointed at a movie. Womb Raider was SO much better than this movie… wow.

I think it’s important not to do those things. But to be aware of them and to be dissapointed by them and critical of them. I don’t want to make those movies. I’ve already seen them.

When he’s been offered distribution deals in the past, he’s turned them down. Shearer is adamant that his company and work are beholden to nobody. He and his crew want complete control over their content, presentation, and every aspect of its creation – even if that means shooting on weekends without any money.

Gonzoriffic isn’t your typical entertainment company. Its products look a lot like a bunch of friends hanging out making silly movies to make each other laugh. And, to hear Shearer tell it, that’s not far off from the truth.

He told us about his experience getting low-budget underground cinema on Prime Video and what it’s meant for the company.

We all still have full time jobs, this is kind of like a hobby… it almost feels like philanthropy or outreach on Amazon’s part. Amazon has all this money and it’s like they’re giving independent filmmakers an opportunity. But with Prime, when that became an option for us, it was a life changing thing. Now instead of wondering if we’ll be able to do the next project, maybe we’re able to do two or three.

Gonzoriffic isn’t the only show in town when it comes to underground cinema on Amazon Prime, but you’ve probably never seen anything like its films.

If you’re not a Prime subscriber you can buy Space Boobs In Space and Gonzoriffic’s other films here.