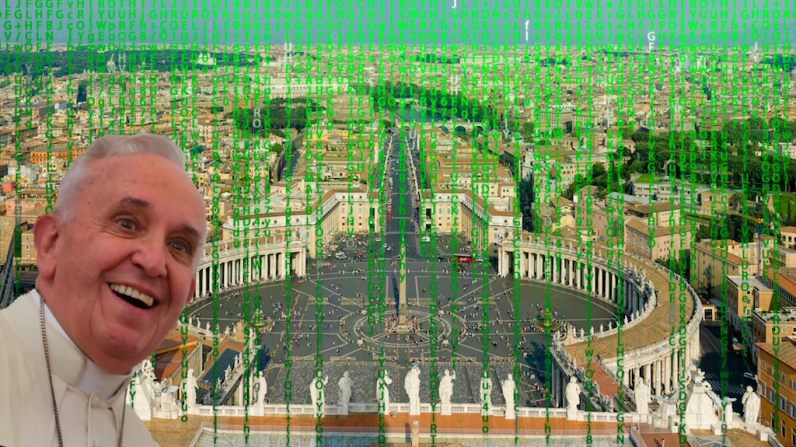 “No, I did not have to pitch the idea to the Pope,” laughs Jakub Florkiewicz, the co-initiator of the first Vatican Hackathon in history. “But the participants of the event hopefully will,” he adds.

So how did this unlikely event come to be? Florkiewicz explains. “Passionate myself about hackathons, I had the luck of meeting people – Vatican insiders – who actually were thinking of launching one at the Holy City and inviting youth to help organize and participate in it. We clicked quickly and decided to work together. Our initial group spearheading the idea comprised of fr. Eric Salobir, founder of OPTIC – the first Vatican-affiliated think tank on technology, the Vatican’s Secretariat for Communication and a passionate priest – fr. Philip Larrey.” Other Vatican institutions joined their team later.

“The Vatican operates different dicasteries and congregations, and each have different speeds of how they go into digital innovation,” he tells me. Some needed more explanation than others, but after flying a few times to Rome, Florkiewicz and Father Eric succeeded in getting the ball rolling.

“Hackathon is a broad concept – we had to spend some time presenting our idea to various people in Rome, to ensure everyone understand that this had nothing to do with actually hacking. We wanted to ensure everyone understood that we are trying to address non-religious, global socio-economic problems. A hackathon might seem unexpected to be organized by a religious organization. But not until one learns about the problems ‘to be hacked.’ It focuses on three themes: Social Inclusion, Interfaith Dialogue, and Migrants and Refugees.”

Any student, from any religious background, was invited to apply. This led to 120 participants, who will be working on projects from March 8 to 11 in the Vatican.

The project is part of a larger mission, spearheaded by Father Eric, to “foster dialogue between the tech world and the humanities,” he tells me.

Father Eric is one of the founders of OPTIC, a Dominican “research network” aimed at precisely that. Just last month, they organized a summit in Paris, bringing together tech bigwigs like LinkedIn co-founder Reid Hoffman and MIT Media Lab director Joi Ito to discuss societal topics with people from other backgrounds – like Grandmasters of the Dominican order.

“I wouldn’t say it’s a religious organization,” says Father Eric, “it’s a value based organization.” Surprisingly, to me at least, in our 40-minute conversation, the topic of Christianity or religion in general wasn’t even broached until I asked about it.

“At the end of the day, everything is spiritual, but the Catholic social teaching is just aimed to improve the dignity of the human being in the society and the economy,” he tells me. “This means helping people to find their way in the economy and society.”

“We can be a common place for people who never meet. People from humanities and tech never meet each other, even in universities. We created this place to foster that dialogue,” Father Eric says.

Florkiewicz concurred with that, “We want to promote collaboration across boundaries, divisions, and backgrounds, that’s we invite people from all kinds of different backgrounds. We’re inviting Muslims, Jews, speakers from West Bank, we want to promote discussion and collaboration. We mix invitees into teams that are extremely diverse, that work on problems that we care about.”

“The second thing is that we want to inspire people around the world to use technology to solve these problems, so clerics everywhere know that they can use this model to access skills of young people, and to address issues in their immediate neighborhood.”

“Taking the Vatican into the future can only be step by step,” he continues. “We’re building the next step.”

“The Vatican has a long tradition with science and technology – sometimes a difficult one, like with Galileo. But the Church reconsidered that later. Anyway, this hackathon is one of the key points to build the next step of this tradition. It’s helping to accelerate the pace of innovation in Rome.”

Now a more cynical person might see this hackathon as a somewhat desperate attempt at marketing the church towards young people, but Father Eric laughs me in the face when I bring this up. “We have no time or resource for marketing, that’s not the right way to frame it. The point is to be useful, that’s why we chose those issues, to be impactful.”