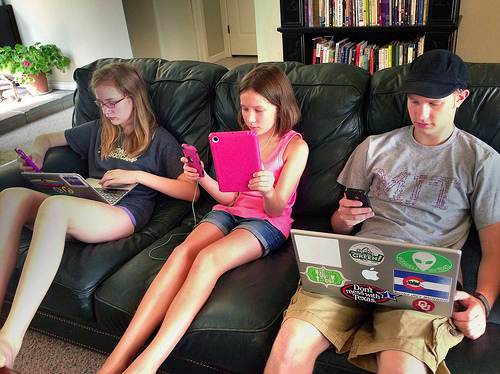 Every parent thinks it’s healthy for their kids to play outside. I want it for my kids, my parents wanted it for me, and my grandparents wanted the same for my parents. Right now, it’s a hot topic among parents that mobile phones are turning kids into zombies who tune out and do nothing else but play games and chat. Parents introduce ‘screentime’ and have long discussions with each other about handling their kids’ screen addiction and how to get them to go out and play outside, like normal kids.

I’ve got some advice for those parents: Take a deep breath and leave your kid alone. They’re fine. They’re enjoying a new world that you don’t understand. Their brains aren’t melting, they’re not turning into zombies. In fact, they are probably more social and connected than any generation before them. They are probably more concerned with what’s happening with the rest of the world than you ever were. Playing outside is overrated.

I’m not even kidding. Consider this:

See my point? I once heard a myth that at one point French politicians debated whether to ban the ‘Chaise longue’ (basically a couch) in France because they were afraid it would become popular and prevent children from – surprise – playing outside.

So here’s a thought: Maybe kids need to sit in a corner and do mind-numbing things as they grow up, Maybe that subtly activates their brain activity and allows them to grow up, build their character and help them adjust to life. Does playing outside help with that too? Sure! But don’t despair.

At my local candy store they learnt a long time ago how to stop employees from eating all the candy. It’s a simple and elegant solution. On their first day, the owners give them a large bag of candy, and tell them to eat as much as they want. Within a week these new people simply get fed up with eating candy. They’re quite literally sick of it.

The same goes for kids: If you ban using computers from their lives, that will turn into exactly the thing they want to do most. But give them access, and they will spend an unnatural (to you) amount of time with their computers, and then move on to other things. There will be a point when they want to go outside to play. It might take a while, but it will happen.

I have two teenage daughters myself, and yes, they spend a lot of time on their laptops and phones. Sometimes it drives me crazy. This is me, last weekend, trying to persuade the youngest one to join me to the beach – it took me 30 minutes, because she was playing Minecraft with another teenager on the other side of the world.

Naturally I told her that playing outside, with me, was more fun than staring at her laptop. Eventually she agreed, but she was in the middle of a game, and tried to explain how it would be super rude to her co-players to just quit a game midway through. It would be about as impolite as interrupting a live conversation of mine, shouting ‘TAKE ME FOR A WALK, DADDY! A WALK WITH ME IS WAY MORE FUN THAN YOUR CONVERSATION’.

If that happened, I would probably tell her how it’s polite to wait for me to finish my story, before asking what she wants.

That made me think: If that is how we want to teach our children to behave, then why do we get angry with them when they don’t put their phones away the moment we demand their attention? Maybe all we have to give them is a little bit of time.

Obviously not all parents will agree with me, and if you are one of those, maybe you should check out this subreddit, where you will find lots of ammunition to troll your kid.

Read next: Someone made a fidget spinner simulation so you can waste your day away