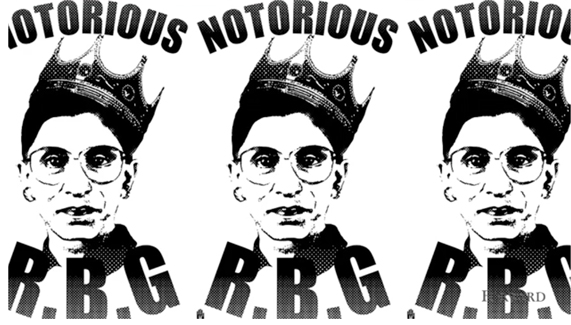 It’s not often (if ever) that a US Supreme Court Justice is considered — shall we say — with it.

But that fate has been bestowed upon Associate Justice Ruth Bader Ginsburg (aka Notorious R.B.G.) who has become a certified Internet meme unto herself.

Not only does Notorious R.B.G. have her own Tumblr (and a forthcoming biography derived from it by none other than Tumblr creator Shana Knizhnik and MSNBC reporter Irin Carmon), now she’s got a tattoo created in her honor that has popped up on that other symbol of trendy Internet hipness, Instagram.

The 81-year-old Justice Ginsburg (the oldest justice on the court) is widely recognized as an outspoken liberal “badass” who has repeatedly confronted the Supreme Court’s conservative majority with scathing dissents to their rulings on voting rights, workplace discrimination and contraception, well aware that a principled dissent can form the foundation of a new law in the future.

And for that, Notorious R.B.G. has gained yet another visual token of affection from her cadre of artistic fans.

She now has her own tattoo called Supreme, drawn by Washington DC-area artist Nikki Lugo, who has shared the brand new artwork on her Instagram account.