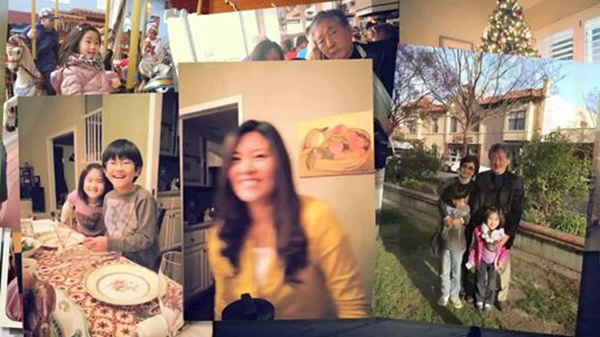 But with Moju, an iPhone app released today by Moju Labs, there’s a brand new content type: an animated still image —hologram-style — comprised of up to 24 individual shots that can be viewed in any angle or order by twisting the iPhone in your hand back and forth.

Moju is designed to move beyond photos, be less painful than video, and blur the line between them, according to Mok Oh, Moju’s co-founder and CEO. “Photos are too concise; video is not concise enough.” And thus Moju, a startup launched last year, has designated its debut app to have all the characteristics of a still photo, but with an animated enhancement that is totally controlled by the user.

Moju lets you capture action in greater detail. You can close in on a facial expression or body movements more accurately than you can recall and which may or may not be noticeable in a photo or video.

View and interact with a Moju in a desktop browser by mousing over the image.

You see what looks like a classic cel animation or hologram effect that makes the image inherently more dynamic but no less realistic, as it is exactly the scene you shot. And that’s part of the ability, leveraged from the iPhone’s motion sensor, to view different angles with a twisting motion of the hand.

“The twisting motion in consuming the content has a visceral effect on the viewer,” says Oh. “I can control this. I can look at the frames I want. I can go fast or slow. So that control is simple but powerful.”

Oh likens Moju to a new kind of filter. “Filtering for Instagram was an obvious thing, because it made pictures more engaging and interesting and expressive. Now we’ve exploded that to not just a slice in time but to different slices — from a simple moment to a time lapse over a longer period — so you can consume the content in any way at your own pace.”

Considering the complex output, capturing a Moju is deceptively simple. After launching the app, you just snap a series of up to 24 shots. You can aim the camera anywhere, or shift the focus a little. You don’t have to shoot all 24 shots to get the full effect, just as many as you need to get the vision across. You don’t have to shoot everything at the same time, for example, if you want to create a time lapse effect.

The app has a few limited options. You can hold down on the big blue shooter for a burst of photos, and you can choose to Ghost, Flip, View Guides, or Restart the sequence from a popup menu to control both the shooting and the output. Ghost lets you view or hide the transitions in the final image; Flip uses the front facing camera for shooting selfies; Guides lets you view or hide the Rule of Thirds guide. You can cancel a shot with the Undo button.

With all shots in order, the Next button takes you to a filter menu where you can choose to apply one of 12 different filters, named after the planets (including Pluto) or choose not to filter. After that, you can write a caption and choose to make the image public or private or use it as a selfie.

I found using Moju to be quick, easy, and intuitive. You can shoot either horizontally or vertically, but the interface is vertical, so it can be a little awkward to view a horizontal sequence.

You can use Mojus to generate new kinds of images derived from popular older forms. For example, in staggering your shots within a single Moju you can create a time-lapse image without having to use video. Or you can create a 360-degree dynamic panorama without switching to a pano mode.

Because this is the first iteration of the app, there are features missing that one might expect from a camera app — and this is partly by design. For example, there’s no zoom function. There’s also no way to access component shots or a composite video. And, you can’t export a Moju to any other format or access any of its output on your camera roll; everything is stored on Moju’s servers in its own proprietary format.

Oh says Moju Labs wanted to keep the first iteration of the app simple so users could get used to the concept, before layering in more complex functionality. Eventually, however, Moju will incorporate the above capabilities and more.

Moju is available now for free and runs on iOS 7.

Read next: Motorola unveils the Moto E, an entry-level Android smartphone for the masses