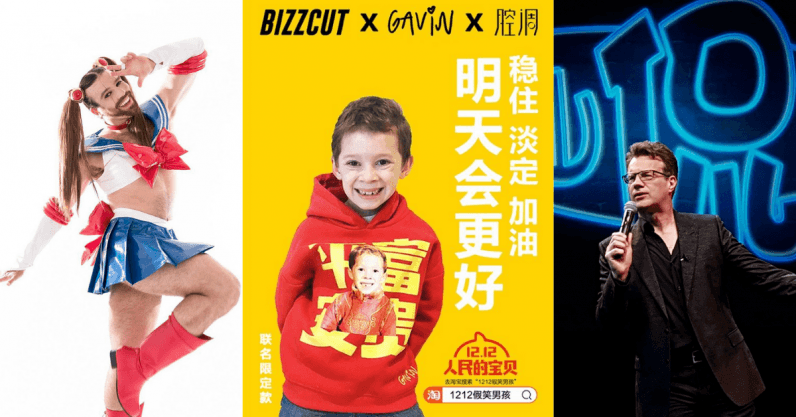 China’s internet celebrity economy has expanded exponentially in recent years. According to a report released by iResearch, the number of online celebrities in China with more than 100,000 followers has increased by 57.3 percent since 2016.

With a single embedded ad in a WeChat post worth up to $145,000 USD for influencers with dedicated followings, and a total market estimated at $14 billion USD in 2018 by Beijing-based research agency Analysus, it’s a sizeable, attractive market for internet personalities.

Chinese internet celebrities have capitalized on these huge audiences and lucrative businesses, but foreigners have started to realize they can join in the fun.

Internet celebrities from outside of China can’t dismiss a market with a reported 1 billion mobile users and many are bringing their online presence to Chinese platforms. Along with their increasing involvement, we’ve noticed some interesting patterns.

In the past, most foreigners who gained fame in China or entered its social media world were either international celebrities or foreigners living in Asia. Most of those in the second group stood out for two reasons. They either showcased very unusual personas, such as that of cross-dressing, bearded, former wrestler Ladybeard, or made a name for themselves through their knowledge of Chinese language or culture, like Dashan.

But now a new breed seems to be taking the reins. They’re often already popular on social media overseas and don’t speak Mandarin apart from a few simple phrases. This doesn’t phase people as English is better understood among the younger generation and fans often subtitle videos to help those who aren’t fluent. And these content creators may not be experts on Chinese culture, but they somehow connect with Chinese audiences.

A good example of this trend is 8-year-old Gavin Thomas, known in China as “jia xiao nan hai” or “fake smile boy.” He became a well known figure on Chinese social media after photos showing him smiling to be polite went viral there.

Putting on a happy face to please others or smooth things over is a cornerstone of many Asian cultures so people could relate and he gained fans for his cute, clear expression of “polite reluctance.”

The hashtag #Gavin Thomas# (in China, # is before and after the word) appears over 11.6 million times on Weibo, China’s version of Twitter. Gavin opened his Weibo account in July, 2018 and already has 1.9 million followers on the platform, which is more than each of his Facebook, Twitter, and YouTube accounts.

But Gavin didn’t begin his social media journey on Weibo, Facebook, or YouTube. His uncle Nick Mastodon is an online star in the West and started putting videos of a very young Gavin on platforms like Vine years ago. He’s also played a key role behind the scenes in Gavin’s success in China.

Gavin has now cooperated with Taobao to launch co-branded items such as a hoodie with his picture on it. This arrangement reflects a change in the monetization path for foreign bloggers in China.

There also seems to be a new drive among laowai (“old foreign,” a slang term for foreigners in China) bloggers in 2018 to not only produce excellent content but to connect themselves with aspects of life in China and become cultural symbols in their own right.

I’m convinced that in 2019, foreign influencers in China will pay more attention to connecting with Chinese audiences, creating self-branded products that resonate there and monetizing them.

The biggest platforms in China are WeChat and Weibo. They could be considered equivalents of Facebook and Twitter, except that the version of WeChat used in China, called 微信 / Weixin, has exponentially more functionalities than Facebook, including the ability to pay bills, hail taxis, and buy flight tickets.

In the past, international bloggers focused mainly on WeChat and Weibo. But with big trends in China toward short video content in 2018, local influencers spread their content among different secondary platforms and foreign influencers followed suit.

Some focused on Bilibili and other short video platforms, some opened Xiaohongshu accounts to do product reviews and others concentrated on funny videos.

Some bloggers from other countries have even won fans on Zhihu, the Quora of China. Marie, a fluent Mandarin speaker from the UK, goes by the name Tan Manru on Chinese social media and made a name for herself on Zhihu and in video content.

In 2015, she recorded a video with Chan Han Siri, a popular Chinese video blogger who speaks fluent Mandarin and fluent British-accented English. He makes content to explore Western culture and explain it to Chinese people. Their video was published on Bilibili, Youku and YouTube, where it got more than 37,000 views.

In her answers on Zhihu, she usually gives insights into cultural differences and uses humor to show her understanding of Chinese culture. She’s generated more than 130,000 likes and 41,580 favorites for her content.

Chinese social media is blooming with all kinds of new platforms and features so in 2018, especially with the rise of short video, creating a wider array of content for different platforms to attract followers became a must for foreign internet stars.

The rise of short video and MCNs

Short video took center stage in 2018, allowing apps such as Miaopai, Kuaishou, and Douyin to come to the forefront. The video ecosystem is changing in other ways too.

For example, The Slivki Show is a Ukrainian channel on YouTube that features fun science experiments and life hacks, like how to make 2 liters of juice from one orange. It has more than 1,000,000 subscribers and 191 million views. In 2017, it began to publish its content with Chinese subtitles on Weibo.

With more and more foreign celebrities in the Chinese content market, there are larger numbers facing the bumps in the road of cross-cultural communication and entering a new market. The Slivki Show is an example of content creators working with an MCN or multi-channel network.

MCNs find and recruit talent and then manage their presence on various platforms. The Slivki Show work with the Yoola MCN which manages more than 72,000 YouTube channels. Because YouTube is blocked in China, it’s localizing channels that it thinks fit the preferences and appetites of a Chinese audience.

In some ways, people don’t realize how involved Western celebrities already are with Chinese social media and MCNs. Karlie Kloss joined Xiaohongshu (called Red in English) in May while Robert Downey Jr , Taylor Swift, Britney Spears, and Dwyane Wade have been on Weibo for some time and Radiohead even had a Weibo account at one point.

Many of these big stars are helped on Chinese social media by MCN to the stars, Fanstang. For new creators and emerging talents, there are plenty of other smaller outfits looking for partners and content that will translate well in the Chinese market.

I think more celebrities big and small will join MCNs, vlogs will become even more popular, especially for foreign bloggers with big YouTube followings and more foreign celebrities will become active on Chinese social media. Internet celebrities from outside of China can’t dismiss this market and laowai bloggers will establish a stronger presence there in 2019.

Read next: We’re missing the ‘Skynet’ to complete our connected robot future