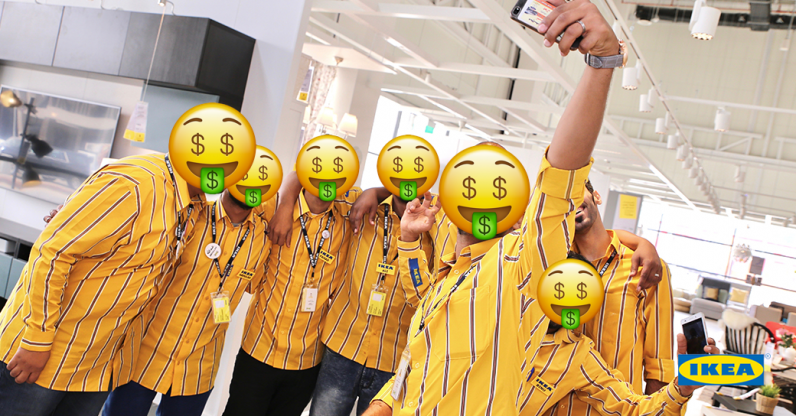 Have you ever been to an IKEA concept store? If you’ve ever visited one, you were part of one big experiment. The Swedish company has been using these concept centers for something you wouldn’t expect.

Not long ago, I visited one near my hometown. Yours truly naively thought they’d be selling ‘concept’ furniture…

Nothing could be further from the truth. All your movements and actions are meticulously monitored while you think you’re just browsing the store. This is how IKEA puts it:

We believe in learning by doing. We operate the IKEA Concept Center in Delft, the Netherlands, where shopping, learning, testing and supporting all come together.

As a neuromarketeer, this gets me excited. IKEA analyses our behavior for good reasons: the furniture giant wants to know the effect of subtle (and sometimes less subtle) changes in the environment on our buying behavior.

Recently I’ve been visiting the store in Delft more often. Making it easier for me to spot those subtle changes (the experiments). The location of the restaurant, the signs, and even the public bathroom — which seemed to be relocated (which made me extremely curious).

What’s the neuromarketing behind all of that? Let’s take a look into the psychological marketing techniques that can explain these changes. Does the location of the toilets really matter in which neatly packed closet you’ll be cramming into your car?

1. A fun day shopping – the distraction of kids

All aboard! Well, not everybody. Let’s start at the beginning: Småland. The paradise where you can shamelessly leave your kids, so you can shop in peace. And for good – economic – reasons. Kids tend to get bored easily during the long path the Swedish meatball giant has laid out for you. Bored children in turn focus their endless energy on their closest entertainment: their parents.

What follows is that shopping with children makes you want to sprint through that one-way maze. Less time in IKEA means less spending, but also less time and attention to the bigger purchases. Exactly the purchases IKEA wants you to make. Less nagging, higher margins.

2. Have you lost track of time already?

Have you ever stopped to notice that there’s no window in sight in IKEA? You can look, but you won’t find a dash of sunlight. The fake clocks on the walls aren’t of much help either when it comes to knowing what time it is. It’s a smart trick borrowed from casinos.

Take away every indication of time, and you lose all sense of it. And suddenly you’ve spent more time wondering around than you’ve planned. Slowly filling up your basket in the meantime.

3. No commitment issues? One from Cialdini’s playbook

Just when we’re about to embark on our journey, we meet a handy dispenser of pencils and empty shopping lists. Very thoughtful of IKEA, because with so many products and corresponding storage places, we can use a memory aid.

Young Tim (me) never missed an opportunity to snatch some free pencils (yes, I’m guilty). And while this also smells like Cialdini’s reciprocity (you give something to me, so I want to give you something back: my money), there’s a stronger principle at play: commitment.

By clearly writing down what you want to buy, you’re committing yourself to this purchase. With every word, and every article you’re jotting down, you’re obligating yourself just a bit more to really buy that closet. Just because it’s on your own list. Compare this to a situation where you don’t have that list. Now you’re not committed to buy that bag of chips, because you didn’t really need it after all.

4. Remove reasons not to buy – change the mindset

With your pencil and paper ready to go, you prepare yourself for the big tour to the wealth of choices for a corner couch. Still, your eye catches the first product category: ‘the nice to have items’. Dishwashers, sponges, candle lights, you name it. ‘I mean, while I’m here, might as well buy that cheap dishwasher. It will come in handy.’

That small purchase just so happens to change your whole mindset. Instead of ‘what shall I buy’, your brains have changed gear to buying mode. In buying mode, the strongest thought is: ‘what more should I buy?’ Through this seemingly small purchase, there’s no more stopping you from buying more. Shopping season has opened.

5. The true reason behind the cheap restaurant

Chances are you were going to buy something anyway. You were deliberately going to IKEA after all. One of the reasons being that you’re convinced that they’re dirt cheap. Just look at the restaurant. It seems they’re giving away the food for practically nothing. There’s no way they can make any money on that, right?

Your conscious brain tries to find a rational explanation for it. “If they’re only making pennies on a dollar, it can only be profitable when they’re doing large quantities.” The proof of the pudding is in the eating, right?

Whether it’s true or not, this pricing sets the stage for IKEA as a whole. You’ve convinced yourself that IKEA sells their products at almost the same price they’ve purchased it. With margins this low, you’re definitively getting the best price available. While this isn’t necessarily true for all products…

You’re finally done shopping. You’ve crossed every item of you list and with enough boxes on your cart to fill half a home, fate is staring you straight in the eyes. It’s time to check out. All those little purchases slowly add up to a considerable amount. Let’s face it, spending money does hurt a bit.

Still, IKEA won’t let you leave feeling depressed. They’ve found a smart remedy. Simply because they’re well aware that it’s the last purchase that sticks around, there’s one last offer you can’t refuse. It’s the cheapest hot dog or ice cream you’ll ever find. Why not give yourself a treat after this long shopping trip?

And that’s how you end up with a good deal. According to the ‘peak-and rule’ that’s the thing that sticks. The peak and the end.

Satisfied, you settle down in your — self assembled — couch (‘The IKEA-effect’) and you look back to a fun day shopping.

Tim, don’t leave us hanging! What’s up with that relocated toilet? What kind of neuromarketing can be behind this?

Back to Google Scholar, I dug into every bit of scientific research I could find on shopping behavior and toilets. Turns out, there’s none. So did the blue yellow furniture market leader know something not even scientist were able to find out?

On my wits end, I visited my favorite store once more. Searching for inspiration or hints regarding ‘the toilet experiment’. For some reason, and to my surprise, the bathroom was back to its original place. A kind store employee on sight helped me out on this one.

The toilets were simply moved because of a construction period.

Read next: A freelance writer's guide to writing over 25,000 words each month