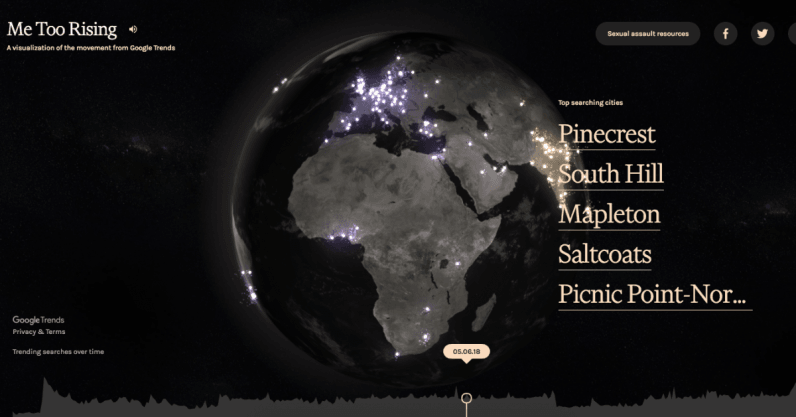 Credit: Me Too Rising

As #MeToo celebrates its first anniversary since going viral, and sexual assault continues to be at the forefront of political conversations around the world, finding new preventative solutions seems more pressing than ever.

One year ago, #MeToo went viral, empowering women and survivors of sexual harassment and abuse all over the world. The hashtag ushered in a new era of feminist activism, fundamentally shifting society. Survivors across the globe shared their stories and experiences of sexual abuse and harassment — and some listened.

To visualize the global effects of #MeToo, Google created Me Too Rising earlier this year — an interactive website using data from Google Trends. It highlights “Me Too” search trends across different cities around the globe from October 2017 to now.

For critics who claim the movement is a phenomenon isolated to western countries, this website proves otherwise. You can explore Me Too Rising in the preview below:

Malika Saada Saar, Google’s Public Policy and Government Relations Senior Counsel, wrote in a blog post: “#MeToo marks a time when sexual assault survivors everywhere turned the internet into a platform for their voices and perspectives to be heard and respected.”

Google credits #MeToo as a pivotal moment in internet history. Although global awareness of sexual assault is a crucial first step, awareness alone cannot fix the problem. Me Too Rising also lists a directory of sexual assault resources in efforts to further help survivors.

On October 15 2017, in the wake of dozens of allegations of sexual harassment against Harvey Weinstein, actress Alyssa Milano tweeted “me too.” She asked her followers to respond with the phrase if they had ever experienced sexual harassment or assault themselves.

Milano’s tweet quickly went viral, and a powerful outcry from survivors of harassment and sexual assault ensued. In the first 24 hours, half a million people responded to Milano’s tweet, and by the end of November, Twitter confirmed over 1.7 million tweets had been made with the hashtag or its translations globally.

And this was just on Twitter, other social media platforms felt the #MeToo explosion too. Facebook revealed to CBS News that in the 24 hours after Milano’s tweet, 12 million posts and comments were published, and 45 percent of all American users had friends who had posted #metoo.

This shined an unforgiving spotlight on the realities of sexual assault’s prevalence.

Me Too Rising‘s timeline begins around the same time of the tweet in early October, whenThe New York Times and The New Yorker published their first explosive investigations into Harvey Weinstein’s decades of sexual abuse.

The interactive timeline dates the time different cities were searching for “Me Too” and lists the top trending stories in that city relating to the feminist movement and sexual assault.

Google wrote on Me Too Rising’s about page: “This data represents global trends of people searching for the movement from the top 300 searching cities every day. (The cities most searching for “MeToo” are cities with the highest proportion of search interest in “MeToo”, relative to all searches made in the city in the given time period — October 1 2017 — the present day).”

While many prominent celebrities and figures helped #MeToo go viral, the movement was actually created decade ago. Tarana Burke, the founder of the #MeToo movement and Senior Director of Girls for Gender Equity, marked the anniversary on Twitter with a reflective post:

A year ago today I thought my world was falling apart. I woke up to find out that the hashtag #metoo had gone viral and I didn’t see any of the work I laid out over the previous decade attached to it. I thought for sure I would be erased from a thing I worked so hard to build. + https://t.co/VmfwTxhcIo

She was also featured in Google’s celebration of #MeToo’s viral anniversary:

Through Burke’s work as a black activist and advocate, the campaign was initially launched to provide “empowerment through empathy” for survivors of sexual abuse in underprivileged communities. As Burke alludes to in her post, many claim #MeToo was hijacked by white women, and diverted from its original purpose to serve marginalized survivors.

While the hashtag’s virality is largely thanks to a few prominent celebrities, Burke told Ebony “Me Too” wasn’t originally built to become a viral campaign or ephemeral hashtag that is here today and forgotten tomorrow.

It was a catchphrase to be used from survivor to survivor to let folks know that they were not alone and that a movement for radical healing was happening and possible.

What’s happening now is powerful and I salute it and the women who have disclosed but the power of using ‘me too’ has always been in the fact that it can be a conversation starter or the whole conversation – but it was us talking to us.

#MeToo was originally meant to be a code word, a safe channel for survivors to recognize one another. But since then it has grown to be so much more, a symbol that survivors and non-survivors alike recognize all over the world. The #MeToo movement is global because sexual assault is a global epidemic.

The future of #MeToo

As the #MeToo movement continues to challenge the patriarchy and give a voice to sexual assault survivors, more countries are finding ways to speak up — and not just in the western world.

For the past three weeks, multiple prominent Indian women working in media and entertainment have come forward with their stories of being raped and harassed by male colleagues over the years.

Because of these recent allegations, India is currently shining brighter than any other country in the world on the Me Too Rising map. The people who are searching most for #MeToo are from small cities and towns in India.

Some of the local stories that caused a bright light over India included “The Story of Bhanwari Devi, India’s #MeToo Woman” in Jaipur, “India’s actresses are starting to seize their own #MeToo moment” in Mumbai, and “#MeToo draws cop attention” in Kolkata.

Me Too Rising illustrates the movements global effect from its first day going viral in October. Alongside India, other countries including Kenya, Pakistan, and China have joined in on the movement.

The hashtag is now being used in at least 85 countries. Most of the hashtags are translations of “me too,” but there are several interesting variations: #ExposeYourPig from France, #TheTimeThat from Italy, and #WhenTheMusicQuiets from Norway.

While many consider #MeToo as being hijacked by powerful white celebrities, the movement is finding its roots again in marginalized communities, and places where women traditionally don’t have the social power, or resources to voice their opinions.

There is no #MeToo if we don’t listen to every story, and Me Too Rising is making those stories shine brighter.

You can read other articles from the Code Word series here.

Read next: Miss the iPod? Get yourself one of these groovy music players