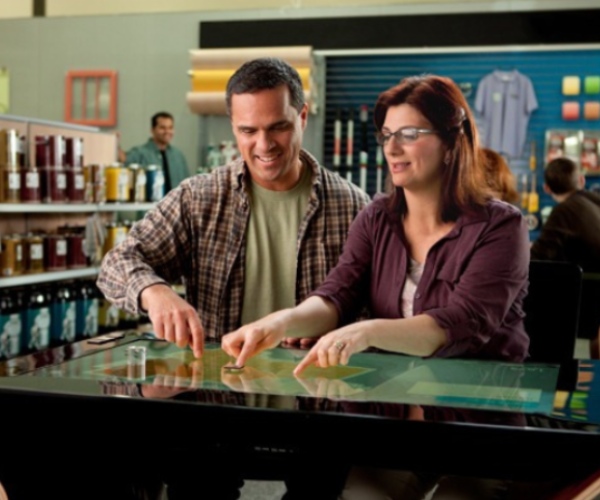 The Royal Bank of Canada has partnered with Microsoft (launch partner) to provide customers an interactive banking experience through the use of Microsoft Surface 2.0.

With Microsoft Surface, RBC begins a new generation of banking in its institution, and its hoping the implementation of Surface will add a fun and interactive experience to improving financial literacy. Using Surface the possibilities are endless, and we’re assuming that RBC will continue to develop apps that include educational information about your financial situation, along with info on new products or services its offering.

In a demo at CES last week, we got a peek of an RBC app that showed us how a mail-out flyer could be used to enter customers into a draw/contest, just one of the ways that companies can get customers to engage these new Surface kiosks.

We had a chance to speak with RBC’s Alan Depencier, VP of Marketing Services & Transformation earlier today. He told us that in the last few months, RBC has rolled out the new Surface kiosks in two new retail locations that include an interactive environment called Discovery Zone. Alan said that RBC is excited about the new Microsoft Surface due to its smaller size and pixel sense technology. A technology that enables RBC to mail-out flyers with unique codes that are recognized by infrared sensors on Surface.

RBC’s new concept stores in Halifax and Burlington provide a less intimidating experience for customers Alan mentioned. And as he points out, RBC has found that giving customers a way to learn about their financial goals through interactive applications, is a great way to ease customers into initiating conversations about complicated financial topics.

Alan also tells us that by using RBC’s animated Coin application, it gives customers a better idea of the benefits of a tax free savings account. The Coin app demonstrates how much customers would save by dropping virtual coins into a pseudo-savings account on the screen.

For tech-junkies, it adds a bit of excitement to understanding your financial profile and with the use of animated applications like Coin, it adds a level of simplicity to banking services. For whatever reason, I may even listen to a shiny new Surface rather than my financial adviser. Maybe that’s just the geek in me.

The video below shows us a working model within one of its new retail locations.

Read next: Reeder for iOS updates with faster loading and 5,000 feeds