This article was published on November 24, 2017

Adam Helps is an app that lets anyone living in the Toronto area hire others in their local communities to help them with odd jobs, much like TaskRabbit does (and to a lesser extent, classifieds services like Craigslist, Gumtree, and Kijiji).

If you’ve burdened with some fiendishly tricky IKEA flat-packed furniture that needs assembling, or a lawn that needs mowing, you can put out the feelers into your local community and find someone available. You can even use it to find a babysitter, if you want to take the night off.

But there are a few key differences between Adam Helps and the competition. For starters, location plays a huge part in the service. Unlike digital cork-boards like Craigslist, Adam Helps is only accessible through a smartphone app, and it only shows jobs in your nearby vicinity (although you can change your location, which is why I was able to play around with it despite not actually being in Canada).

Another big difference is how people get paid. Individuals are free to charge whatever they want for jobs. This can either be a per-diem, an hourly rate, or a flat sum. Payment is done in-person, either as cash or check. This means that Adam Helps doesn’t take a commission, unlike other gig economy apps, like Uber and Lyft. 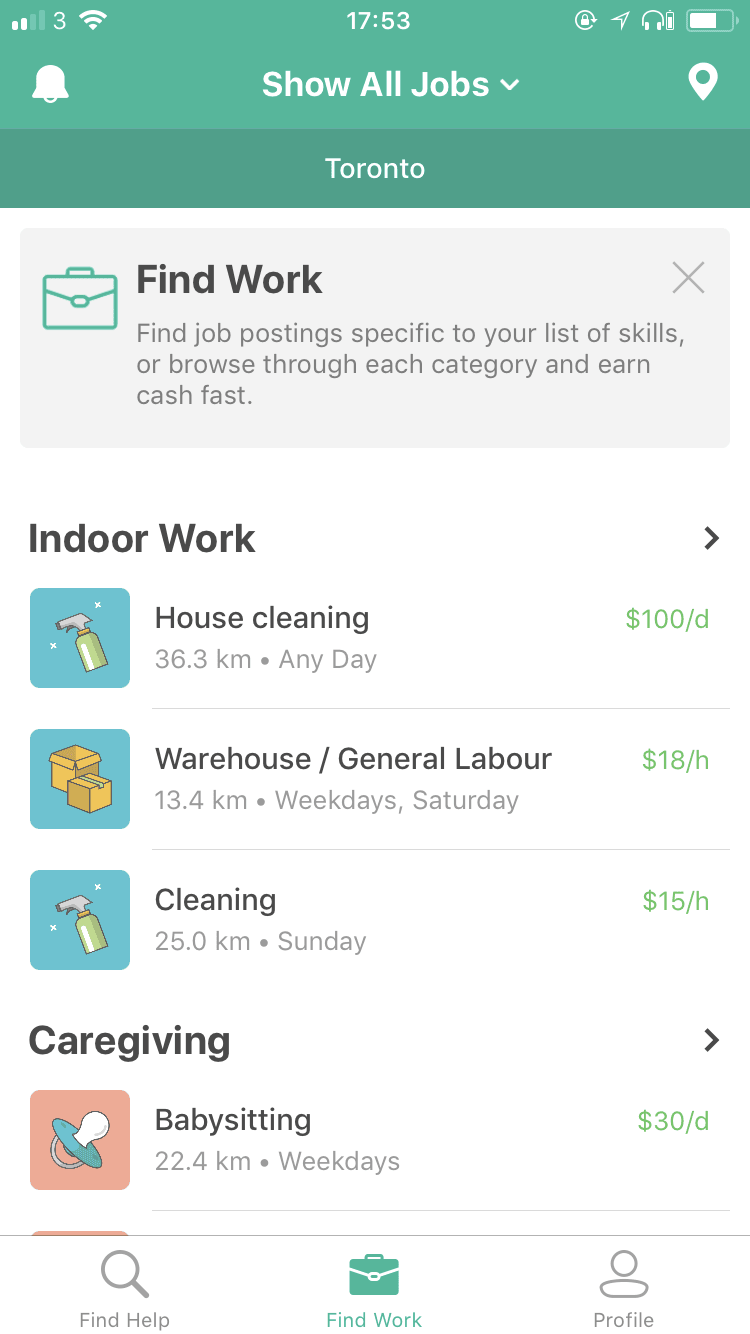 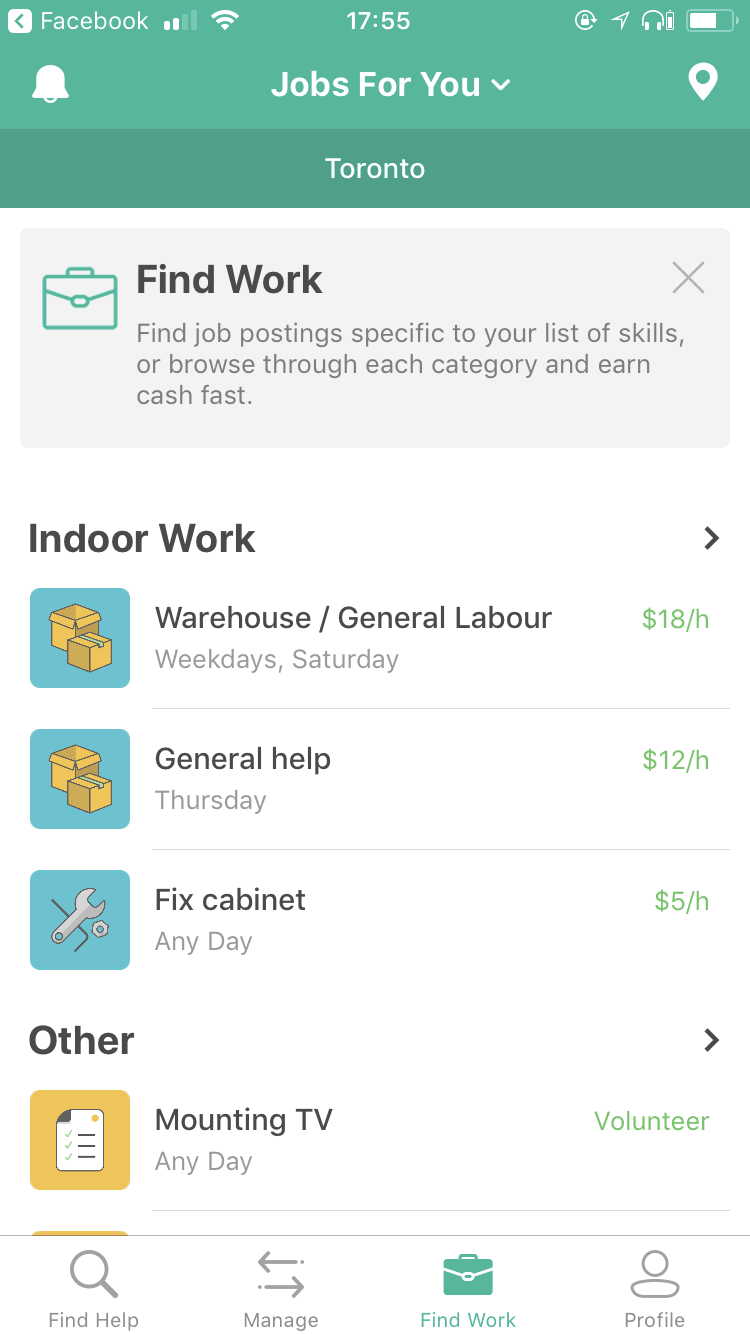 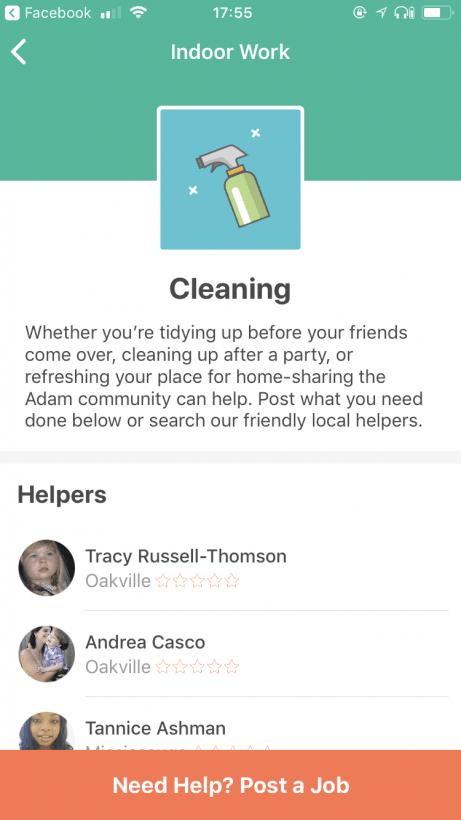 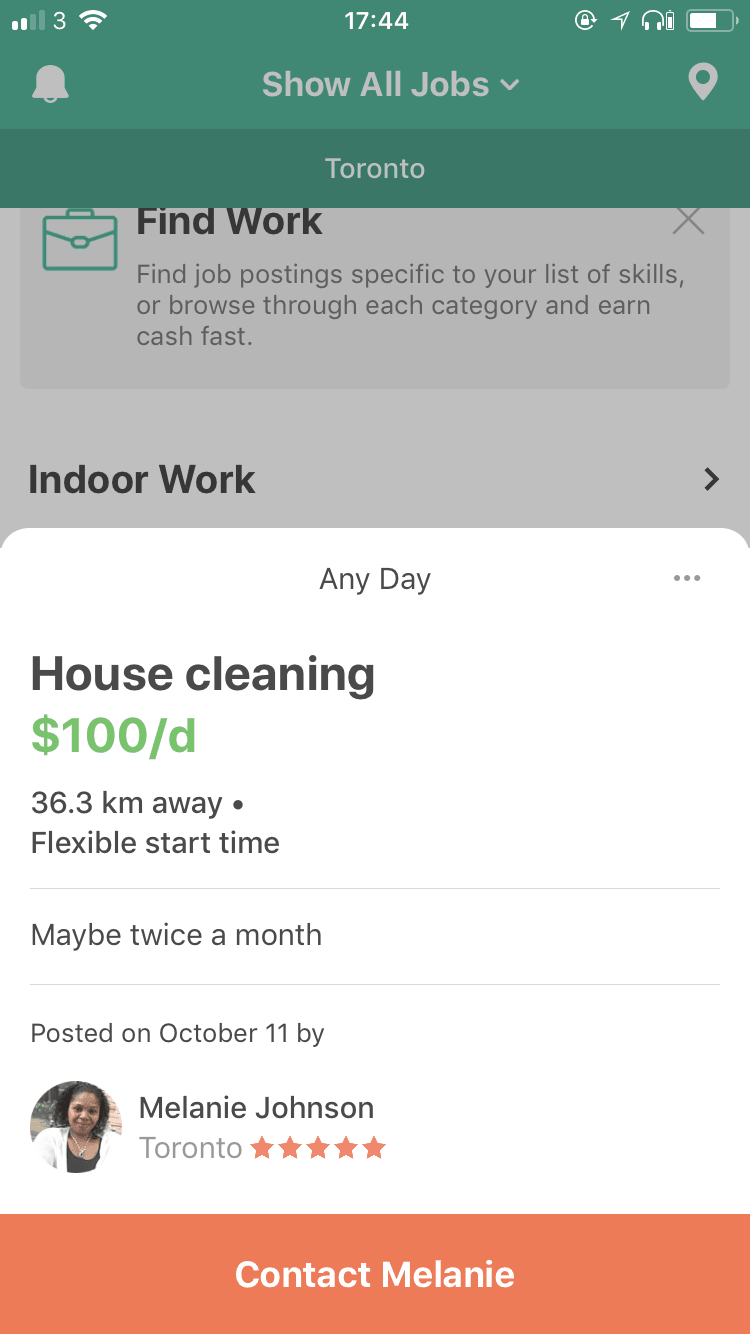 As company founder and CEO Adam McLeod explained: “We made a conscious decision not to take commission from anyone working for someone else because our helpers have worked hard and earned their money.” Ultimately, the company plans to turn a profit from paid extras, with the service aiming to adopt a freemium model in the near future.

Trust plays a huge role into the service. As is the case with rival sharing economy service Airbnb, users of Adam Helps must verify themselves using their social media handles. There’s also a review element, and Adam Helps is immediately notified whenever a bad review is left, so it can intervene. Expanding on this further, McLeod said:

“All users must be verified by social media, and everyone can see the reviews left by previous users and helpers. With in-app messaging, we’re empowering users to decide what they need in order to feel safe and secure; as an example, if you’re looking for a babysitter, you may ask for references. Whereas if you’re having someone clear the snow from your driveway this might not be as important. The app has so much flexibility but it is regulated by the community. Since you’re likely to hire a neighbour we believe this already helps to establish some comfort and security between both parties.”

Adam Helps has so far raised $950,000 CAD — which is roughly typical for Canadian seed rounds. According to founder Adam McLeod, this gives them enough runway to survive until Spring 2018.

In many respects, Adam Helps embodies the values people associate with Canadians — friendliness, community-mindedness, and just being nice. This is something that came up in my conversation with company founder Adam McLeod. He said that doing good is “intrinsic” to Adam Helps’ brand identity, and that its overall goal is to “build strong communities by helping each other out.”

Sadly though, there are no immediate plans to expand out of Canada, with McLeod saying “we plan on branching out of Canada when it makes sense to do so. Canada is a great place to start a project like this because the people are friendly and warm to the idea of helping each other out. Once we’re successful here we’ll look at where we can go next.”