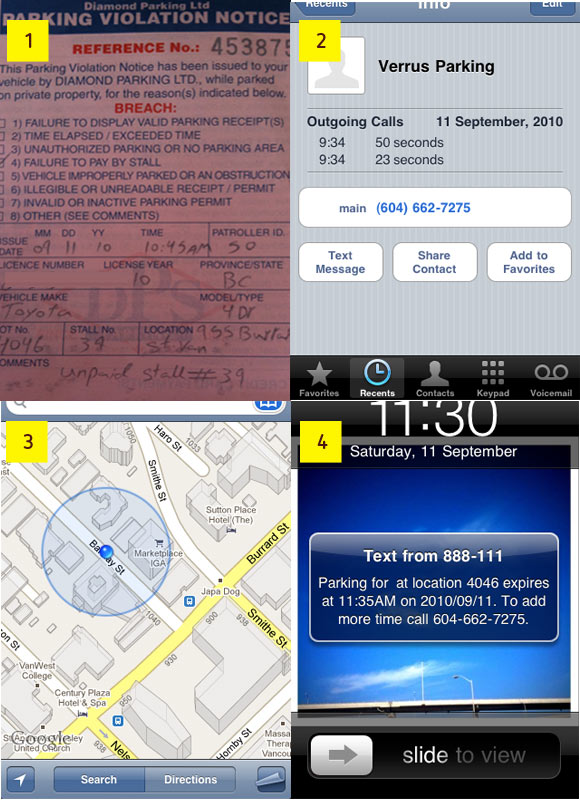 Here in Vancouver we have a “slick” system to pay for parking at meters and lots where you call phone number, enter in an ID, and the location (all the meters and lots have unique ID numbers) and pay for the space with your credit card. I’ve used the system a few times and it’s very handy when you don’t have enough change for the meter. You can even renew the meter via SMS (you get nice reminders like “Your parking will expire in 10 minutes, add more time?”), also very handy. There is a problem, however, when the systems don’t all work together and you get a ticket. Here’s how a friend of mine successfully disputed a $50 parking ticket, just by using his iPhone and a few screen shots.

First thing to know about how the payment system works is that it’s run by a company called Verrus. Verrus hooks into the City of Vancouver’s system of parking meters and several of the privately run lots around the city as well. It’s this second part where things seem to go off the rails. It seems that the Verrus system doesn’t always transmit the information to the lot owners that yes, you did indeed pay for parking in that lot.

My friend J.P. Holecka recently parked in a lot downtown, had a workout at the new YMCA, then came back to fine he had a $50 parking ticket. This, unfortunately, isn’t the first time this happened to J.P., but this time he thought for a moment about how he could prove that he did indeed pay for parking so they could take their $50 ticket and stuff it.

Here were the steps:

Here’s what the series of screen shots look like all together:

To be very, very clear, J.P. wasn’t trying to pull a scam or anything. He received a parking ticket for a space he paid for and the fault was the electronic payment system not transmitting the information to the ground correctly. What this example does show is that with a little smarts you can dispute unfair tickets, etc by using the tools you have at hand. J.P. does make a great point that he’s a very savvy, tech-equipped guy, but what about the people who aren’t so well equipped? How many of them have been paying for tickets they should have been because they couldn’t present the proof that they paid?

Goes to show, a little technology in the palm of your hand is a really good thing.

Read next: The 'How Not To Pee' Public Bathroom Chart