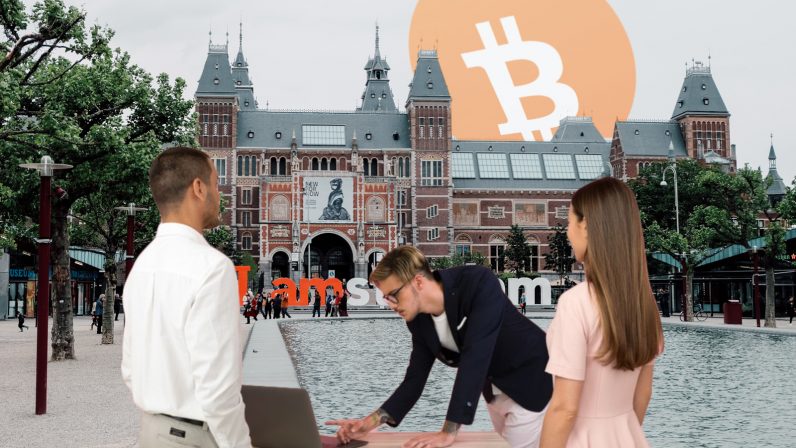 We all know how blockchain is decentralized, it operates all over the world and has no geographical boundaries. Like the internet, you can be part of the conversation regardless of where you are in the world (give or take a few places).

But depending on where you are, some places might help you get more involved in the industry than others. Silicon Valley, for example, is a hotbed of tech startups and it’s overflowing with talent, but it’s not the be-all and end-all for new and emerging technologies like blockchain.

Many cities – and even some entire nations, like Malta – are vying to provide the best environments to support developers and startups working on the decentralized technology.

Amsterdam is one such place. It’s perhaps not a city you would immediately associate with blockchain technology, but let me explain why the canaled capital of the Netherlands is great for those involved with the industry.

1. Amsterdam has a growing tech scene

Amsterdam is not only saturated with startups, but is also home to several big-name tech companies. What’s more, a growing proportion of these startups are working in the fintech space, an arena that is undeniably relevant to blockchain. Startup challenger bank Bunq is based in Amsterdam, as is social investment app BUX, and digital payment services provider and the first Dutch unicorn Adyen.

But what about blockchain-specific startups? Well, Amsterdam has a tonne of those too, including the likes of infrastructure providers Bitfury and LTO Network, ticket resale platform GUTS Tickets, cryptocurrency and blockchain market data analysis firm Blockdata, security token issuance platform Dusk, and cryptocurrency investment fund Cyber Capital. The list could go on.

With this hive of development and activity comes talent, ideas, discussion, and people to connect to within the industry. Individuals that you will no doubt get a chance to meet at one of the many conferences, meetups, or gatherings the city’s tech scene plays host to.

At a recent blockchain industry meetup event hosted by StartupAmsterdam, I had the opportunity to brush shoulders with some of the local blockchain crowd.

Sentiments were clear, there was a hive of friendly discussion. But it’s more than that, as Justin Bons from Cyber Capital told me, there are a lot of competing beliefs, but here we have the opportunity to take a thesis and antithesis to synthesize new understandings about what we’re dealing with.

In a fast-developing world, being able to share ideas and learn from one another is key to staying the course and encouraging development.

Amsterdam plays host to a number of great blockchain and tech conferences, where hundreds of companies exhibit, throughout the year.

In June 2019, the Amsterdam RAI hosted the Blockchain Expo which was attended by the likes of IBM Blockchain, Bitcoin payment processor Opennode, and eToro amongst many others. But that’s not all, the AI and Big Data Expo, Tech Expo, and Cybersecurity Expo were also hosted in the adjacent conference center halls.

Not too far away from Amsterdam is Groningen, which plays host to one of Europe’s leading blockchain dev events, the yearly Odyssey Hackathon. At this year’s event over 1,500 people collaborated to develop public infrastructure using blockchain.

Back in June, Amsterdam also hosted “Breaking Bitcoin,” a technical event that focussed on the security of the cryptocurrency and everything around it. As ever, many well-known names attended the event and participated in discussions and seminars that sought to push Bitcoin to the next level.

Though, stepping outside of Amsterdam for a moment; the Netherlands hosts an entire week of blockchain-focused events called Dutch Blockchain Week.

Back in June this year, locations in Amsterdam, Utrecht, Rotterdam, The Hague, and Almere hosted a range of blockchain and cryptocurrency events that sought to explore the technology from a variety of angles. Talks at this event looked at the industry’s regulatory challenges, development opportunities, and it even hosted dedicated meetups from the likes of Bitcoin Wednesday and cryptocurrency exchange Binance.

What’s more, last week TNW hosted its dedicated blockchain and cryptocurrency conference, Hard Fork Summit. A host of well-known names came to give their take on blockchain including: Brian Norton COO of MyEtherWallet, eToro’s senior market analyst Mati Greenspan, and chair for the Commission for the Stability of Cyberspace Marin Kaljurand.

There are tech conferences all over the world, but as Kaljurand told me, there are not many places that draw such a diverse group of people. Indeed, many conferences in this area cater for technically minded individuals, but policymakers, end-users, and designers are often left on the sidelines.

In conversation with Brian Norton from MyEtherWallet at Hard Fork Summit, he was very open about being a non-technical mind. Like Kaljurand, he believes we’re finally starting to see a valuable cross-section of society come together to discuss blockchain and cryptocurrency including; users, non-technical critics, and tech developers.

3. Old school industry is getting into blockchain

It’s easy to get caught up in blockchain from the point of view of startups. While blockchain as a technology is still maturing, a number of big, well-established firms are paying attention to its opportunities too.

As it happens, some of the most interesting explorations into blockchain and cryptocurrency technology are being undertaken by companies in the Netherlands and Amsterdam.

But it’s not just Dutch banking, finance, and fintech that are examining how blockchain might be able to improve business, farming is too. AgTech, short for agriculture technology, is also being influenced by the technological opportunities offered by blockchain tech. According to Startup Genome, Amsterdam ranks fourth in the world for AgTech and New Food businesses.

Startups are attempting to use blockchain to help optimize farming processes like crop insurance, produce traceability, and supply chains. Take Amsterdam-based startup The Fork for example. The Fork’s aim is to take blockchain to agriculture businesses and help them understand how the decentralized tech can benefit their operations.

Just an hour’s train ride away is one of the world’s busiest ferry ports, the Port of Rotterdam. Some of the intriguing applications of blockchain technologies have been in shipping, logistics, and supply chains. The Port of Rotterdam has over the past few years been conducting trials of decentralized blockchain-based technologies. Earlier this year, it announced the upcoming trial of a blockchain-based energy trading platform.

But what if investigating blockchain and cryptocurrency crime is more your field of interest? Amsterdam is still a great place to be, Europol – based in The Hague – is less than an hour away. The inter-nation investigative authority has been pivotal in blowing open a number of high profile cryptocurrency crimes. At the moment, Europol is developing a “game” to teach officers how to forensically trace cryptocurrency.

Indeed, while we may be drawn to think of the future when it comes to emerging technologies like blockchain, we shouldn’t forget about how existing industries are getting involved.

Amsterdam has one of the most well-known and well-attended cryptocurrency meetups, Bitcoin Wednesdays, which is worthy of its own mention.

The event is hosted on the first Wednesday of each month and brings together many local and international industry professionals and enthusiasts to discuss blockchain, Bitcoin, and how the space is developing.

Back in July, Bitcoin Wednesdays had its sixth anniversary, making it one of the longest-running Bitcoin meetups going. Previous speakers have included Bitcoin Core developers and IBM blockchain devs. The infamous Craig Wright of Bitcoin Satoshi’s Vision has even made an appearance in the past.

Sure, there are big blockchain meetups all over the world, but how many happen every month? And how many continually draw in interesting speakers like Bitcoin Wednesdays does? Not many, that’s for sure.

If you’re working in a blockchain, Bitcoin, or cryptocurrency startup, attending Bitcoin Wednesdays could be a gateway to much bigger things.

Thanks to Amsterdam’s blossoming fintech ecosystem there’s also a very well attended meetup hosted by Holland FinTech. The group usually hosts events once a month bringing together a diverse group of industry professionals that work in the fintech scene.

It’s a bit more corporate than Bitcoin Wednesdays, but no less valuable. You could meet developers, bankers, and industry experts and hear pitches from some of the scene’s most exciting fintech startups.

5. The practical side of life

Let’s bring ourselves back down to earth for a moment. The following points don’t really relate to what makes Amsterdam a great place for blockchain specifically. But they do relate to how Amsterdam is a good place for you, and you care about blockchain right? So the two go hand-in-hand.

One of the best things about Amsterdam is how well connected it is. For all those conferences and events that happen overseas, you’ve got the practicality that Schiphol, one of the world’s busiest airports, is just a few minutes away by car and boasts countless direct, international flights. Amsterdam is also impeccably well connected to the rest of Europe by rail – you’ll soon be able to get directly to London on the Eurostar.

One of the first things anyone who lives and works in Amsterdam will tell you is how good the work-life balance is. No matter how much you love cryptocurrency or blockchain, you can’t always be working on it so it pays to have an enjoyable place to live. Amsterdam has that in spades.

What’s more, presuming that you speak English, you won’t really experience a language barrier. The standard of English, in the whole of the Netherlands in fact, ranks as one of the highest in the world. Whether you like it or not, the tech world speaks English, especially when it comes to blockchain.

You’ll also need somewhere to work from, too. Amsterdam has a blossoming tech eco-system with swathes of startups basing themselves here. There are coworking spaces all over the city, including the TNW-owned, TQ.

There’s also a location from Primalbase, the coworking space company that ran its own ICO and launched its own token, where community members can pay for their desks using Ethereum. And if you really believe in what Primalbase is doing you could buy some of its PBT tokens.

So, while there might not be one thing that makes Amsterdam stand out, you really need to think about the whole picture.

Amsterdam is a hyper-connected “village” city. Everywhere that’s worth going is accessible by bike, and for those trips further afield it’s well connected by planes and trains.

The open, liberal, and tolerant attitude of its inhabitants make it one of the most diverse cities in Europe, too. According to some reports, there are over 180 nationalities here. With diverse locals comes a broad and valuable skills market. Of course, don’t forget about the world-renowned universities that are nurturing talent for the next generation of industry professionals.

With all its conferences, connections to the rest of Europe, its blooming tech and blockchain ecosystem, and the livability of the city, Amsterdam might not have one specific thing that makes it great for blockchain developers, but as an entire package, it’s very hard to beat.