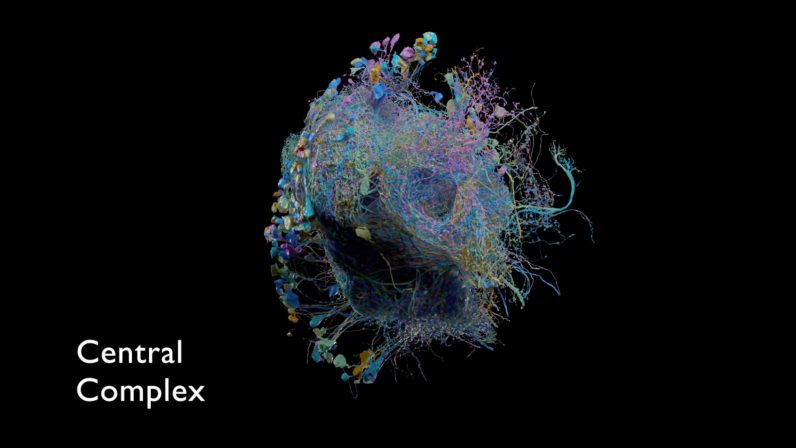 Google and its partners at the Janelia Research Campus today released the largest, most detailed set of brain scans ever published. The project encompasses nearly one-third of the brain of a fruit fly and includes detailed mappings for more than 25 thousand neurons featuring more than 20 million synapses. The best part: it’s all been released open-source to the public. This is a great day for science.

These aren’t the kind of brain scans you might be thinking of. The scientists didn’t strap flies into tiny MRIs and zap them, they sliced their brains into 20-micron thick layers and then pulsed each layer with electrons. The resulting data was then used to produce a 3D image comprised of trillions of 3D pixels.

The reason they chose fruit flies is because, compared to previous subjects, they’re incredibly complex but still posses a small enough brain to make the endeavor manageable. Unlike worms or other lower animals, fruit flies have built-in navigation systems and exhibit high-level behavior functions such as courtship dances. They’re a lot like us, just on a much smaller scale.

The neural circuits responsible for behavior remain largely unknown. Previous efforts have reconstructed the complete circuits of small animals, with hundreds of neurons, and selected circuits for larger animals. Here we (the FlyEM project at Janelia and collaborators at Google) summarize new methods and present the complete circuitry of a large fraction of the brain of a much more complex animal, the fruit fly Drosophila melanogaster.

Stitching together millions of 3D images is a monumental task. Even with the aid of Google‘s AI, the scientists still spent hundreds of thousands of hours over more than two years tracing synapses in virtual reality to verify the veracity of the project.

The big idea here is that these images aren’t just random neurons in the flies‘ brains. These specific groupings are called “connectomes” according to the field of “connectomics.”  These maps hypothetically work like wiring diagrams for brains. In theory, with the right map, we could trace behavioral activity.

James Vincent at The Verge describes the idea of “connectomics” in an article published today:

Connectomics has a mixed reputation in the science world. Advocates argue that it helps link physical parts of the brain to specific behaviors, which is a key goal in neuroscience. But critics note it has yet to produce any major breakthroughs, and they say that the painstaking work of mapping neurons is a drain on resources that might be better put to use elsewhere.

Luckily for organizations and individuals who can’t afford the resources it would take to build this particular project, Google and the scientists at the Janelia Research Campus have published the entire project open-source. Even better, the team painstakingly formatted the data, images, videos, and other information in a way that makes it easily accessible to everyday people and usable by world-class researchers.

Learn more about the project and check out all the amazing images and videos at the “Hemibrain” website here.

Read next: Scientists may have found the missing link between brain matter and consciousness

Read next: How to turn your iPhone into a Google security key