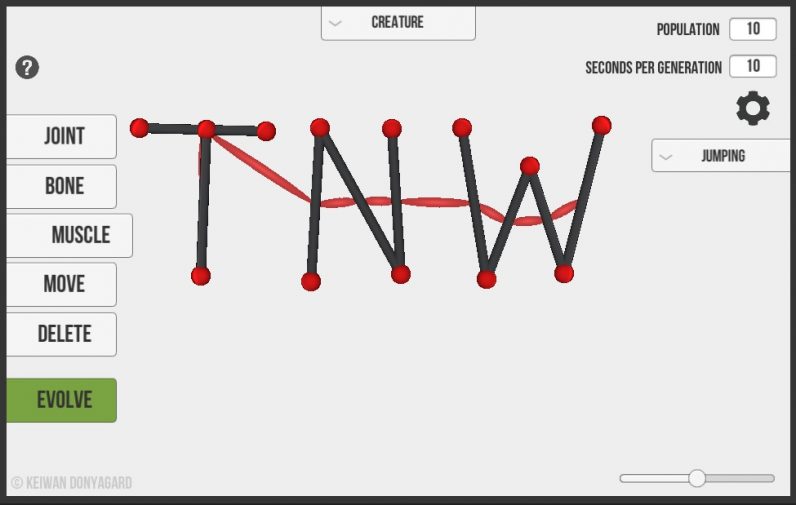 The magic of artificial intelligence brings us better Netflix recommendations, better cancer diagnoses, and the ability to becomes gods by creating our own AI-powered creatures and forcing them to evolve for our amusement.

So, about those Netflix recommendations… just kidding, lets talk about the “becoming a god” thing.

Software developer Keiwan Donyagard developed an interactive artificial intelligence demonstration in the form of an evolution simulation. It’s called, aptly enough, “Evolution.” And, if you’re my boss, and you are reading this article, it’s also the reason I’ve gotten no work done today: I’ve been playing Evolution.

It’s not really a game, per se — as Donyagard says on his website, it’s a simulation. There aren’t any objectives, goals, or rewards for winning. Other than the self-assured knowledge that the creatures built by your holy hands are majestic, beautiful and worthy of your grace, that is.

The purpose of the simulation is to build a rudimentary stick-figure-like AI construct out of bones, muscles, and joints. Once you assemble your monstrosity you “evolve” it to perform tasks including running, jumping, jumping over objects, and climbing.

After a specific amount of time your little creatures will die and get replaced by a new generation using “chromosomes” from select members of the previous generation. It’s a blast to watch your stick monster bumble about for generation after generation until suddenly it starts getting better at its prescribed task.

This is the spiritual successor to the classic game Spore that fans deserve! I was pretty delighted to see my little “TNW” monster (as seen in the featured image of this article) finally learn to butt-scoot its way across the screen (even more impressive considering it has no butt).

Point your web browser to Donyagard’s site and you can create, evolve, and save your own robot-brained stick-figure subjects to rule over. Just consider being a kind and beneficial god in case the tables get turned one day.