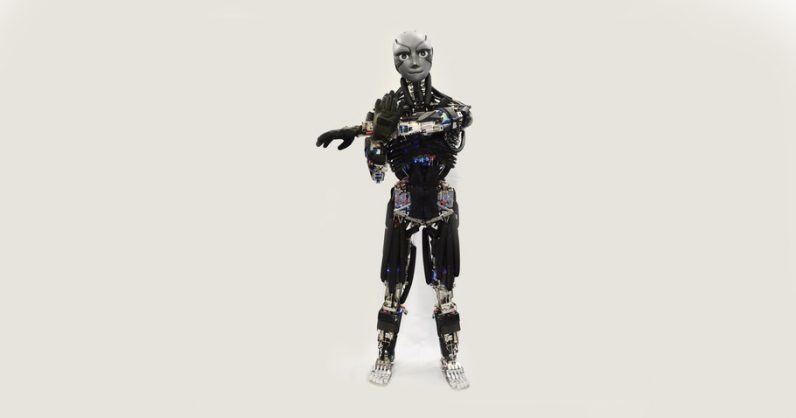 Adding to the list of things robots do better than humans, this creation from the University of Tokyo is now better than we are at exercise. In Science Robotics today, the researchers showed off their newest humanoid robot, Kengoro, who can do sit-ups, push-ups, and back extensions — which a quick Google search revealed to me, is definitely a real thing.

Back extensions, for the curious:

Kengoro is nothing without a series of 116 actuators. The actuators are placed inside its frame in an attempt to mirror the human body, and through push/pull commands can contract much like whatever flab resides where our muscles should be.

These actuators, though, produce heat. To counter increasing temperatures, researchers added a water cooling system to his porous aluminum frame. Water circulates to cool the actuators and when it does, Kengoro “sweats,” much like a human. This sweat, however, isn’t an attempt to cool the body, but escaping water vapor from the cooling system.

It’s super flexible to boot, in fact Kengoro’s about six times as flexible as the average human.

Aside from sweating and exercising, two things we’re strongly against at TNW, Kengoro likes to spend his free time playing badminton. He’s not that good at it, but you have to blow off steam somehow, right?

We can only hope Kengoro doesn’t take up Crossfit next. That would be an intolerable robot.