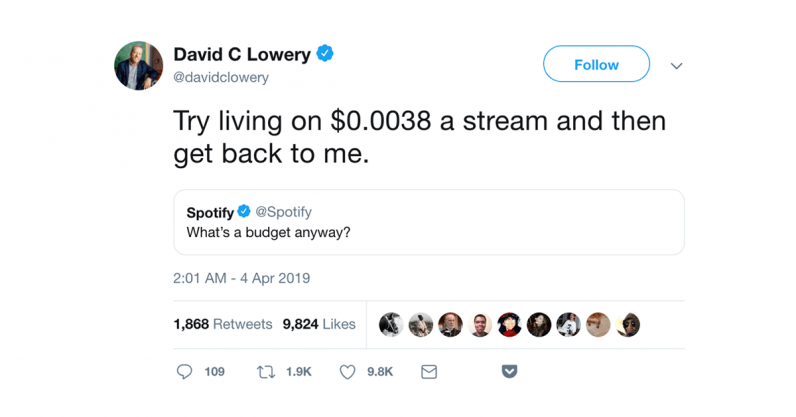 Spotify tweeted an ad for its new partnership with Hulu, along with a comment about “budgets.” Several people, including one particularly savage songwriter, pointed out the company shouldn’t be the one to talk about money when it offers such a paltry sum to the artists whose music it hosts.

The ad itself isn’t anything terribly insensitive. Spotify announced its new bundle a few weeks ago — which gives Premium users a free Hulu subscription — and the ad was promoting this. It shows two different shows and songs for “Payday” and “Rent’s Due,” and then says “Feel more of what you’re feeling.” The tweet itself says “What’s a budget, anyway?” which is a bit of an odd caption considering you’d think this deal would be perfect for those with a budget.

But as several users responded, Spotify should really think twice before mentioning budgets, considering the price artists’ pay for the company’s low prices. And one respondent in particular gave a very thorough, cutting tweetstorm about the topic.

This wasn’t just any singer-songwriter, however. The sharp remarks came from none other than David Lowery, Cracker and Camper van Beethoven frontman and one of the people who successfully sued Spotify for copyright infringement a few years ago. Lowery has been as vocal as anyone can be about the damage Spotify is doing to the industry, and his tweetstorm is definitely worth a read:

As he pointed out, Spotify streams earn artists exceptionally little money. Spotify, in Lowery’s words, spends a great deal of its money on things such as its pricey offices, and it’s currently appealing the rates set by the Copyright Royalty Board in an effort to pay even less.

5/x Spotify is currently trying to reduce pay to songwriters even lower by suing the Copyright Royalty Board. They want to reduce songwriter (already meager) royalty rates 30% https://t.co/QjjNsVa0eM

Lowery and singer-songwriter Melissa Ferrick both sued Spotify in 2015 for distributing songs without paying the proper licensing fees. Spotify’s go-to defense at the time was that it was putting aside money to pay rightsholders — it just had insufficient information on who the rightsholders were in this case. The lawsuit was settled in 2017, with Spotify setting up a $43.4 million fund to pay for those whose rights had been infringed.

Lowery’s said in the past that he’s not against Spotify. He told Billboard, “Streaming is the future of the music business, and I’m not against it — I just want everyone to get paid fairly.” Even if you don’t necessarily agree with all his points, he’s worth listening to, if only to know why lots of people might not be cool with Spotify talking about budgets.

We’ve reached out to Spotify to see if it has any response.

Read next: Windows 10's next update will give you more freedom to upgrade when you want