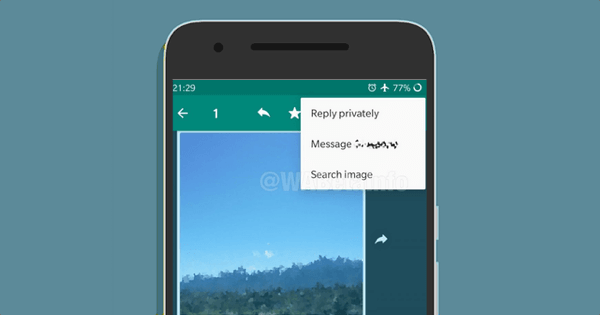 WhatsApp‘s had a difficult battle against fake news last year. Now, it’s testing a new weapon in this fight – a reverse image search button. According to a report by WABetaInfo, a beta version of WhatsApp’s Android app has a new feature to search an image directly from the chat.

The report notes that the chat app will use Google APIs to compare the selected image with similar pictures, and will show the result in a browser. As shown in the screenshots below, the app will upload the image to Google’s image search – as WhatsApp can’t read the encrypted content in the chat – to compare it with other images.

We’ve seen several instances where propagandists have relied on doctored images to spread misinformation. Reverse image search is listed in several guides to identify fake pictures. However, the onus of making the final decision still lies on the users. The feature will only help you to sift through visible results, and determine if the source of the image and content of the message on WhatsApp have the same information.

After the reverse image search, if you can’t conclude whether the image is fake or real, you might have to take further steps like reading the metadata of the said image or go to fact-checking sites to search for stories around that image. As we’ve noted earlier, often people use fake quotes with authentic images to mislead people. Reverse image search won’t be able to help you in those cases.

WhatsApp can do little about determining the source of the information due to their encryption, but this tool can at least lend a helping hand to people who’re keen to take a little effort to stay out of the misinformation trap. We’ll test the feature to know how effective it can be, when it’s rolled out.

Read next: [Best of 2019] How ideological bias in video game design changes our view of society