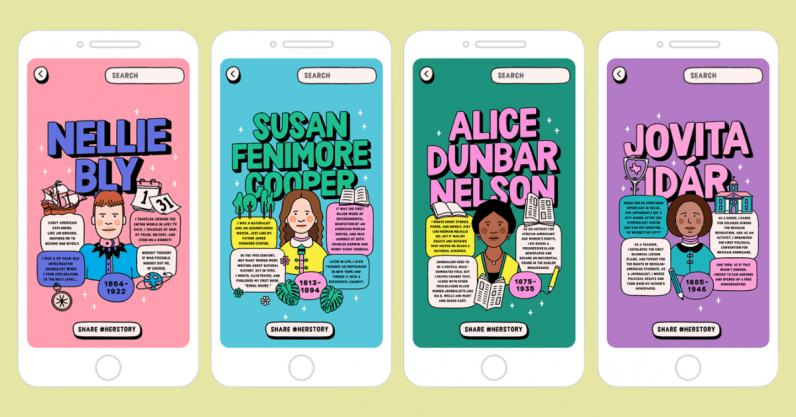 March is Women’s History Month, and thinking back to school, women’s history was an important topic that was rarely spoken about. During history lessons, we were taught about conflicts, innovation, and resolutions that made the world what it is today — without telling the stories of the other half the population.

In the US, 89 percent of the stories in history textbooks are about men. History really has been “his story” — it was written by men, for men. But an augmented reality app, Lessons in Herstory, is bringing life to the forgotten stories about women’s triumph in American history by rewriting the most popular US history books in California.

Lessons in Herstory allows students to scan an image of a male historical figure in America’s most popular history textbook, A History of US, Book 5: Liberty for All? 1820-1860. The app unlocks a related story from the same period of a forgotten woman in history. Currently, the app features the untold stories of 75 women from the 19th century including influential women like: Annie Oakley, an exhibition shooter, Harriet Tubman, an abolitionist and political activist, and Cathy Williams, the first African-American woman to enlist in the United States Army.

There’s a saying that “you can’t be what you can’t see” and apps like Lessons in Herstory have the power to educate, change perceptions, and shift culture. Textbooks have remained the same by only telling one side of history by only highlighting the same people.

By putting a lens on history, this app really does prove it’s not a man’s world.