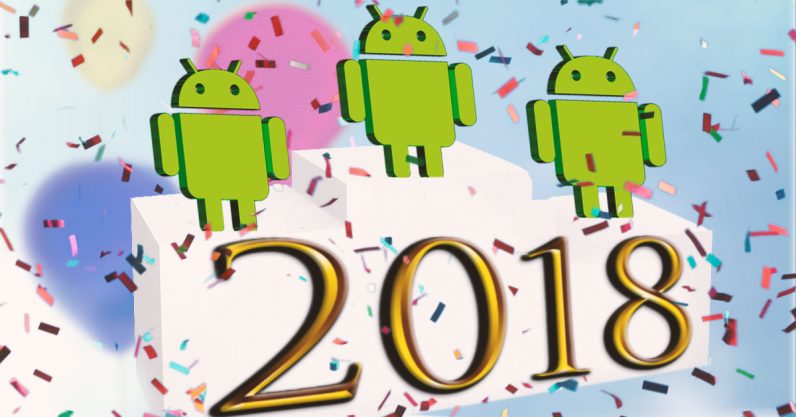 Here at TNW we’re always looking for a killer app that does something better, entertains us, or introduces innovation. Our favorite Android apps in 2018 are a mixture of brand new apps, returning champions, and things we’re finding for the first time.

These aren’t the usual suspects, like “Netflix” and “Spotify” that you’ll find on most lists. Instead they’re the ones we wrote about or fell in love with this year that haven’t necessarily been shoved down your throat already.

This keyboard for Android comes with a surprisingly useful web-connected search bar that makes it far more robust than the built-in keyboard from Google. TNW’s Abhimanyu Ghoshal says:

Alright, so technically it’s a feature for Google Assistant more than an app. But you should definitely check it out if you’re one of the lucky few with access. Google Duplex is that much-ballyhooed feature for Pixel phones that allows Google Assistant to schedule appointments by making phone calls on your behalf. A lot of people have thumbed their noses at the idea, but the optimists in us think this could be good for people who suffer from social anxiety. Plus, it makes us feel like the future is now.

You need a password vault. Stop acting like you have your passwords under control. If you’re using the same password for any two separate apps, you’re setting yourself up for sorrow. Luckily, you don’t have to languish in your insecure lifestyle. Last Pass makes it simple to generate unique passwords and store them for later. You never have to remember anything and there’s a free plan available, though of course the subscription package is more robust.

Stoop is one of those apps you don’t know you need until you use it. If you subscribe to more than a few newsletters, Stoop will help you keep  your inbox uncluttered. As TNW’s Ivan Mehta said:

Stoop, available both on Android and iOS, lets you discover and subscribe to newsletters in an easy, podcast-like way. When signing up, the app creates an email ID for you with an “@stoop.email” address, so you can sign up to newsletters on the web. This new email address declutters your primary email address by setting up forwards or unsubscribing newsletters.

The app gives you one-click access to unsubscribe from newsletters as well, making it easy to quit following topics en masse.

Recording and transcribing calls is a time consuming and complex process which usually involves hardware, or confusing apps that are hit-or-miss. Otter is one of the few solutions I’ve found that works, works well, and doesn’t lose my calls. TNW’s Matthew Hughes says the Sony Audio Recorder app is a great solution as well.

Huawei’s StorySign is an app that teaches sign language and helps children of all of ability-levels learn phonics and word comprehension. According to TNW’s Matthew Hughes:

The AI-driven Android app works by translating the written word into accurate sign language, which is delivered on-screen by an animated character called Star.

When it comes to crowdsourcing we can’t think of a cooler use case than lending your sight to a visually-impaired person for a few moments. According to TNW’s Cara Curtis:

Volunteers can sign up to receive notifications to videos calls from visually-impaired people. Once connected through Be My Eyes, volunteers can speak to their callers and see what’s in front of the visually impaired person and help them with anything from checking the milk’s expiration date to reading a street sign.

Apps that help you contemplate life and express yourself

Headspace isn’t new, but the app is updated so regularly that it continues to feel fresh. Even though we reviewed it last year, it remains a fantastic choice among mindfulness apps and we recommend it to all of you who are putting meditation on your New Year’s resolutions list.

If being one with the universe isn’t your thing there’s the WeCroak app. It reminds you several times throughout the day that you are, in fact, a mortal. And that means you’re going to die. Cara Curtis says:

WeCroak is an elegant and simple app that casually reminds you of death five times a day and it’s meant to encourage “contemplation, conscious breathing or meditation,” according to its website.

Tattoodo, an app that sounds like a dating site for inked up people, is actually a robust all-in-one app solution for people seeking their next great piece. TNW’s Callum Booth says:

Tattooing is now firmly mainstream, but elements of the industry are still stuck in the past. While industry-entrenched tattoo enthusiasts might not find a huge amount of worth in Tattoodo’s booking functionality, it could make it easier for the person on the street to find a design they love.

Look, there’s a bazillion apps that promise to make your photos look like amazing works of art. Most of them tweak a few contrast and brightness settings and watermark your images. PicsArt, which does have a pro version, actually does some cool stuff for free. No, it won’t make your phone pics look like they were edited by a Photoshop master, but it will let you make some pretty cool shareables with a few taps.

Speaking of apps you can use if you don’t have the time, access, or skill to use Photoshop: Cut Cut is a fantastic background removal tool that’s free on Android. It’s not perfect, but it beats trying to do a Google search for “background remover” everytime you try to make a meme on the fly.

The games we love to play

Yes, Fortnite is everywhere now. No, we’re not ashamed to admit we got excited when it came out on Android. Even though you have to jump through a few hoops to get it (it’s not available on the Android store) it’s still worth it for that sweet battle royale action.

This one isn’t new, but we can’t stop playing. HQ Trivia is one of the few remaining institutions that still requires you to engage in your entertainment on a schedule, as opposed to being on-demand. You have to wait and play HQ Trivia with everyone, and that’s part of its charm. As TNW’s Napier Lopez said:

Though its popularity has decreased somewhat since its heyday earlier in the year, I appreciate that it’s one of the few opportunities for live, collective engagement on a smartphone. In an age of on-demand streaming, it’s nice to have a show to look forward to playing with my girlfriend or friends every night.

This beautiful endless runner is one of the few pure gems on Android. Few games can immediately suck you in with an elegant combination of familiar gameplay and unexpectedly gorgeous graphics in the way that the Alto franchise does. As Abhimanyu Ghoshal said:

If you’re looking for a game that will calm your nerves and take your mind off things, I recommend giving Alto’s Odyssey a go. While the previous title had you herding llamas, this one sees you and a bunch of friends sandboarding through the desert, wall-riding on hills, and uncovering mysterious locales.

At the other end of the spectrum is a game that few people would call relaxing. Hello Quantum was designed by physicist James Wootton. It’s a game that works a bit like a combination of Sudoku and Go and it’s devilishly difficult. The point of the game is to learn how quantum gates and qubits work. It’s definitely a game that’ll challenge almost any intellect.

And here’s a few more

If you’re anything like me you’ll use your holiday break to catch up on some reading. And by reading, we mean comic books of course. Amazon’s ComiXology still makes one of the finest comic book viewers available. With the last chapter of the Avengers slated to hit theaters soon there’s no better time than now to get caught up.

Pocket Casts used to be a top-notch podcast app but it suffered from a lack of features as other apps became more robust. Luckily, in 2018, it saw a major redesign that catapulted it back into the spotlight.  Abhimanyu Ghoshal wrote “It’s now been overhauled with a glorious redesign, and I’m happy to report that it’s back in my good graces as a result.” It’s definitely worth checking out. Google also dropped a barebones Podcasts app this year for those who don’t need a lot of bells and whistles.

Carrot is a cheeky — and incredibly robust — weather app that’s got a bit of something for everyone, as long as you don’t mind a few swears with your forecasts. Once again, TNW’s Abhimanyu on the apps beat had a great take:

It’s silly, but there’s something about hearing a robotic voice exclaim, “These clouds can go fuck themselves,” on a rainy day, that makes you feel like your weather app knows what’s up.

There’s no way we’d let a list end without encouraging everyone to try and learn another language. And that’s just because it’s a great way to break through the barriers separating us and learn about one another. This year we tried Drops for the first time, it’s a unique take on language tutors and worth checking out.

There’s no way we can include every cool app in one article, but hopefully you found something you missed and get some use out of this. If not, there’s always 2019. Have a great year!

Read next: 5 ludicrous cryptocurrency exit scams that regretfully happened in 2018