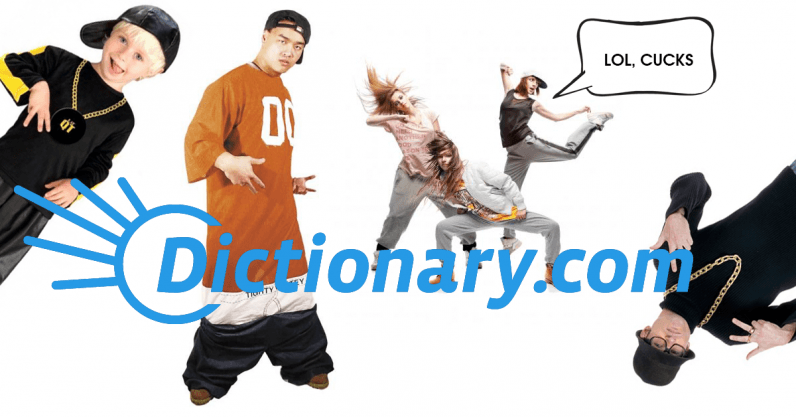 Buckle up for the news of the century fam: Dictionary.com is upping its street cred with a bunch of new, funky-fresh slang definitions like ‘basic bitch,’ ‘cuck,’ and ‘fuckboy.’

This means you no longer have to sit around like a chump when the cool kids start dropping modern terminology at parties, nam sayin’. Instead, you can whip out your phone and and consult Dictonary.com for some turnt words you can use to show you’re truly part of the gang.

“Our products are meant to help users understand the many ways language is actually being used, so we consistently publish new additions, even when communication surpasses the traditional written word,” she continued. “With this update, consumers now have access to comprehensive, accurate meanings and example sentences using the latest emoji and slang terms.”

A man who is desperate for acceptance, approval, and affection from women. This desperation has led to the compromise of his beliefs and values, the desecration of his dignity and self-worth, and his inability to stand up for himself and what he deserves as a human being, eg. loyalty, fidelity, and honesty in a romantic relationship.

By contrast, here is how Dictionary.com has described the term:

A cuck is a derogatory slang term for a weak, effeminate, or inadequate man. Cuck has also been blended with conservative to produce cuckservative, often shortened back to cuck. Both cuck and cuckservative are especially used online by white nationalists to insult US Republican politicians they judge as insufficiently conservative.

In addition to the definition, Dictionary.com further provides some etymological background on the words, including how the phrases came to be, who uses them, and how they appear in everyday life.

Dictionary.com has also added definitions for several more terms, including ‘adulting‘ (or the quality of acting grown-up), ‘fuck up some commas‘ (or to spend recklessly), as well as ‘Netflix and chill‘ which most of you should be familiar with by now.

The company has similarly annotated some emoji as part of the update. You can browse through the emoji dictionary category here. For what it’s worth, Dictionary.com claims it is the first service to include such definitions – as if this marketing stunt is some grand, novel idea.

For the record, this is hardly the first time Dictionary.com has updated its vocabulary. Indeed, American magazine Bustle broached the idea of adding ‘fuckboy’ to Dictionary.com back in 2015.

More recently, the dictionary service made headlines after it quietly updated its app permissions so it could intrude on your privacy.

Anyone who wants to keep it real can get started with Dictionary.com’s full list of slangs here. It’s totally lit.

Read next: Here’s how I’m harvesting credit card data from your site